‘He needs to have a go if he wants to get a go’: Readers respond to Morrison’s UN climate summit snub

Readers this week hoped that the snubbing of Prime Minister Scott Morrison at the UN climate summit would prompt some meaningful policy change that would shift Australia’s position as a climate-change outlier.

In one of our most-commented articles last week, ‘UN defends excluding Morrison from climate summit, Canberra livid with Johnson over snub’, The Age and The Sydney Morning Herald’s Europe correspondent Bevan Shields reported that Canberra was secretly up-in-arms that Morrison had been excluded from speaking at the UN’s Climate Ambition Summit on December 12, with much of the ire directed at British Prime Minister Boris Johnson. 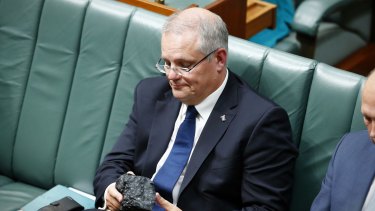 Then treasurer Scott Morrison brings a lump of coal into Parliament in 2017.Credit:Alex Ellinghausen

One unnamed government official close to Morrison said that Johnson had "thrown us under the bus".

"Many members of the government were really angry about the rejection. Some in Morrison's inner circle weren't too fussed about not being able to speak at the event but they were really, really annoyed at how the Brits behaved."

The UN defended its decision with Selwin Hart, the special adviser to UN secretary-general António Guterres, claiming that despite Morrison’s planned announcement to drop his government’s contentious Kyoto carryover credits scheme to meet the nation’s 2030 emissions targets, Australia’s ambition on climate change action did not meet the threshold.

"We will not be commenting on the participation of individual leaders," he said.

“But the three co-hosts – the UN, UK, and France – provided all member states with very clear guidance from the outset that speaking slots would go to countries and other actors who show the most ambition right now.”

The topic engaged many readers who overwhelmingly supported the UN’s stance with many pointing out that Australia is yet to commit to any sort of detailed climate policy.

Plato’s_Toe: “We have no comprehensive climate change policy in this country which is a disgrace. We should fully expect not to receive a speaking spot at this climate summit. Good on the UN for effectively shaming the Morrison government and hopefully prompting some meaningful policy change.”

Henry: “Oh dear, if the PM can’t get a six-minute speaking engagement with the Euros, it looks like JobKeeper for Mathias Cormann in 2021. I’d start cutting back on the Montecristo Cubans and the Chateauneuf du Pape for the interim. As a member of the over 50s blokes, who are inexplicably unemployed, my advice is to bunker down, take brisk walks and stay busy. But remember, it’s not you that’s the problem. Well maybe just a bit, it’s the company you keep.”

Tweggs: “Morrison is being seen as the spin doctor that he is … without substance of any kind. With Trump gone, China angry and now Boris and the UN offside, he is fast running out of friends.”

emtethorts: “Just the first taste of what it is to be a climate change pariah nation. The federal government should take a lead from the UK Conservatives … who have adopted strong climate change policies.”

Lex: “Inviting Australia to an international climate summit would be like inviting a middle-aged, overweight, disinterested couch-potato to participate in the Olympics.”

Gilligan: “Johnson didn’t throw us under the bus. We walked proudly to the middle of the road and laid down ourselves.” And from Beam Scotty up, one-way trip please: “He needs to have a go if he wants to get a go.”

The Waves: “I cannot imagine the UN getting any easier for Morrison under a US Biden administration or international trade over the next decade. Australia can now regard itself as outside the tent.” 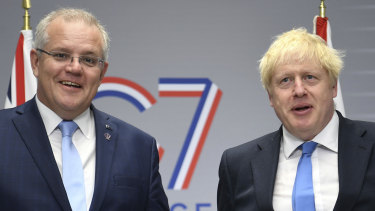 Prime Minister Scott Morrison has said publicly that he was asked to speak at the climate summit by British Prime Minister Boris Johnson.Credit:PA

Reflecting on the comments, Shields says that while many world leaders at the climate summit didn’t provide any new information on how their nations were combatting climate change, Morrison must now act or risk Australia being left behind on the world stage.

“I listened to the whole climate summit and there were plenty of world leaders who offered nothing new,” Shield says.

“I’m not convinced the rejection does the Prime Minister much damage at home. But it does again show that Australia has a problem internationally on climate change. That will be something the government has to deal with as it heads into 2021 and the crucial Glasgow summit in November.”

In stark contrast to the UN’s opposition of Australia, China was given a spot despite its controversial track record on climate change, with dozens of coal-fired power plants still being built alongside Beijing’s recent commitment to carbon-neutrality by 2060.

For other readers, this reflected hypocrisy from the UN.

St Kilda: “So China is doubling their coal-fired electricity capacity but get to speak. If Europe really wanted to send a message to China about being a good global player then don’t give Xi Jinping a forum.”

Badger Most Serene: “Obviously we need to give the UK the flick as we have with China. Thank God we’ve been so subservient to the Americans all these years, they should look after us.”

AustraliaNo1: “China gets to speak but is still building more coal-fired power stations like crazy while producing a large percentage of the world’s emissions. Yet being a ‘developing nation’ they get off with little to no targets! But they get a slot!”

Petal: “Somewhat hypocritical allowing China to speak. However, we have a leader whose country goes up in flames and the response is to bury his head in the sand. So I have little sympathy for him, he deserves the humiliation.”

Online readers of The Sydney Morning Herald and The Age made 34,944 comments on 563 stories in the past week.

Most-read by subscribers in the past week