A lawyer for Hillsong Church co-founder Brian Houston has told a Sydney court he will plead not guilty to charges of concealing child sexual abuse by his late father, Frank Houston.

The senior global pastor of the evangelical mega-church was in the United States when he was served with a court attendance notice in August, following a two-year investigation into allegations he failed to report the alleged abuse of a boy in the 1970s. 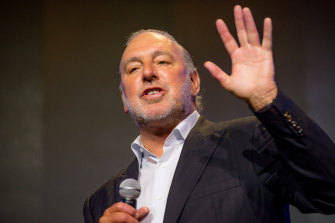 Hillsong pastor Brian Houston has professed his innocence after being charged by NSW Police. Credit:Getty

Mr Houston returned to Australia from the US last month to face the charge of concealing a serious indictable offence, with NSW Police alleging he “knew information relating to the sexual abuse of a young male in the 1970s and failed to bring that information to the attention of police”.

He was released from hotel quarantine last week but did not appear in person at Downing Centre Local Court in central Sydney on Tuesday for the matter’s first mention.

His lawyer told the court her client would be pleading not guilty.

Frank Houston, who died in 2004, has been accused of abusing a total of nine boys while a Pentecostal preacher.

Mr Houston had expressed “shock” after he was charged with concealing what he knew, saying he had always been “transparent” about the matter.

“I vehemently profess my innocence and will defend these charges, and I welcome the opportunity to set the record straight,” he said in a statement in August.

The matter will return to court on November 23.