Hope for an end to 'pointless nagging 'cookie requests' on computers

‘They’re half the reason why I voted to leave!’ Web users celebrate as government unveils plans to scrap hated online cookie requests in post-Brexit ‘shake up’ of EU data laws

Web users have today welcomed government plans to roll back on flagship EU data laws that will scrap online cookie requests in the first post-Brexit shakeup of the UK digital economy.

The Department for Digital, Culture, Media and Sport announced plans to reshape the UK’s data legislation in an effort to boost growth and increase trade post-Brexit.

Speaking to The Telegraph, Culture Secretary Oliver Dowden said the Government intends to peel away from key parts of the EU’s General Data Protection Regulation, which came into force in 2018.

Mr Dowden explained the UK wanted to shape data laws that were based on ‘common sense, not box-ticking’ as they forged their own legislation after leaving the bloc.

Many took to Twitter to share their joy at the news that the bureaucratic and excessive red tape that hampered many an online experience is set to be dismantled. 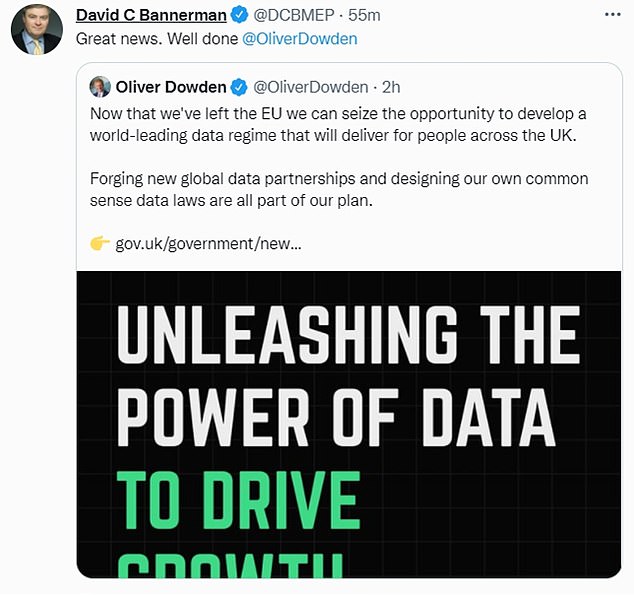 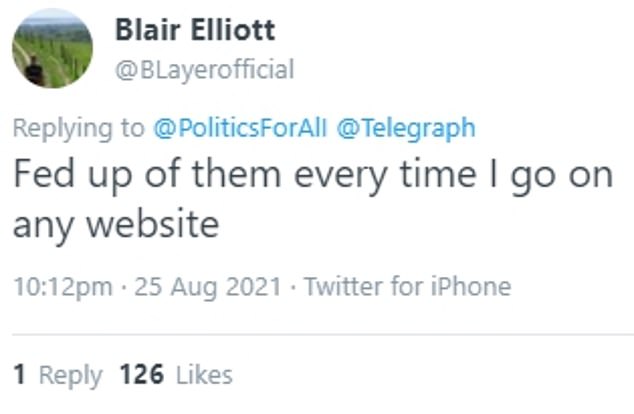 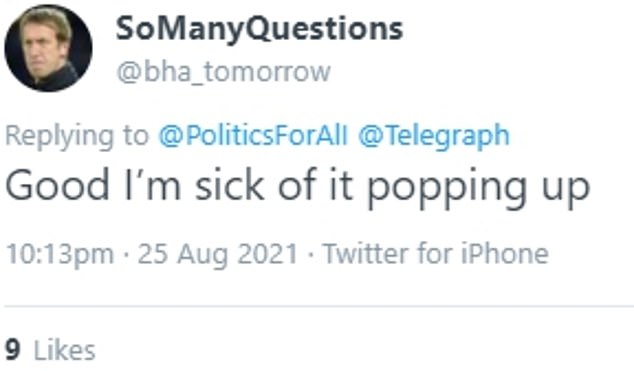 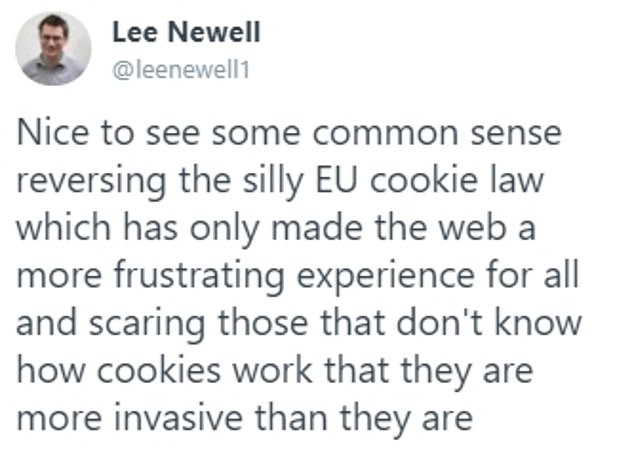 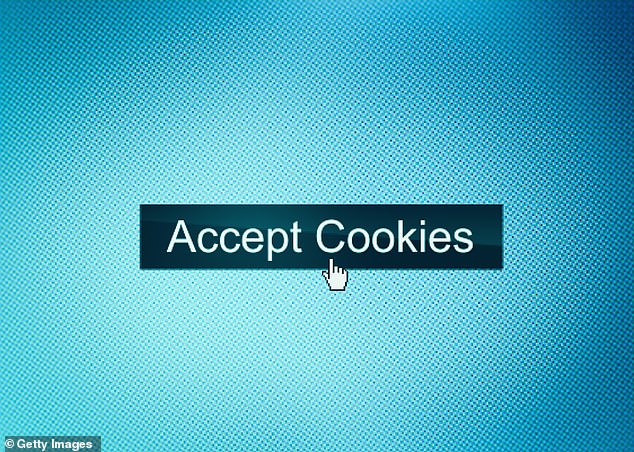 In what is the first post-Brexit shake-up of the UK’s digital economy, Oliver Dowden today outlined how Britons’ data will be used more flexibly in future

Who is John Edwards, the man tipped to be UK’s new Information Commissioner?

John Edwards is an experienced lawyer who spent much of his career practicing in New Zealand’s capital, Wellington.

He has been tipped by Culture Secretary Mr Dowden to head-up Britain’s new data law rollout.

Mr Edwards will lead the UK regulator responsible for enforcing data protection, and will be enjoy newly awarded powers.

The job will involve balancing privacy rights with the promotion of ‘innovation and economic growth’.

Speaking to the BBC, Mr Edwards said his appointment was a ‘great honour’.

He said: ‘I look forward to the challenge of steering the organisation and the British economy into a position of international leadership in the safe and trusted use of data for the benefit of all’

Mr Edwards is currently New Zealand’s national Privacy Commissioner, a position he has held since 2014.

Many praised the ease at which they will soon be able to browse the Internet without ‘invasive’ cookie requests.

Lee Newell wrote: ‘Nice to see common sense reversing the silly EU cookie law which has only made the web a more frustrating experience for all and scaring those that don’t know how cookies work.’

Others were quick to point to the finger at ‘frustrating’ and ‘annoying’ online pop-ups and revealed they were looking forward to the changes.

The Department for Digital, Culture, Media and Sport (DCMS) has said it hopes the measures, which include new data partnerships with the US and other countries, will get around existing trade barriers associated with data rules.

The Government hopes the changes can help facilitate more data transfers between the UK and other nations in areas such as GPS navigation, online banking and even law enforcement.

The move would see the UK diverge from some parts of the EU’s General Data Protection Regulation (GDPR), which came into effect in the UK three years ago, with Culture Secretary Oliver Dowden saying the UK wanted to shape data laws that were based on ‘common sense, not box-ticking’.

‘Now that we have left the EU, I’m determined to seize the opportunity by developing a world-leading data policy that will deliver a Brexit dividend for individuals and businesses across the UK,’ Mr Dowden said.

‘That means seeking exciting new international data partnerships with some of the world’s fastest-growing economies, for the benefit of British firms and British customers alike.

‘It means reforming our own data laws so that they’re based on common sense, not box-ticking.’

As part of the first package of measures announced, the Government said it was prioritising striking data adequacy partnerships with the US, Australia, South Korea, Singapore, the Dubai International Finance Centre and Colombia.

Future partnerships with India, Brazil, Kenya and Indonesia are also to be prioritised.

GDPR, which governs how people’s personal information is collected, has been criticised for being too bureaucratic and overly prescriptive.

Mr Dowden suggested the new reforms would also cut down on cookie banners, which are used by websites to secure users’ consent for storing their data.

At present under the GDPR rules, sites have to give users a genuine choice over whether to say ‘yes’ or ‘no’ to cookies which process and share their personal data. 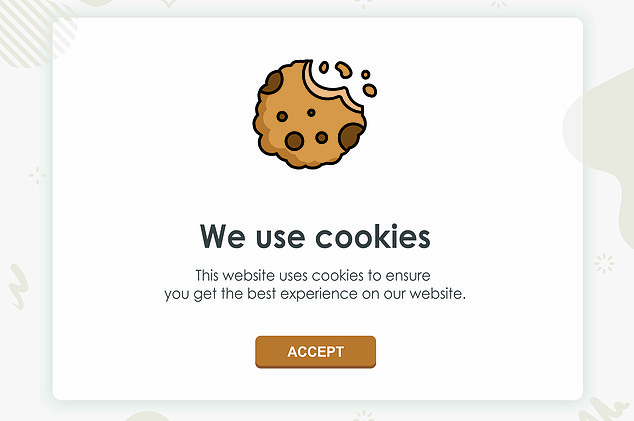 Plans to sweep away swathes of the EU’s flagship data laws could spell the end of ‘pointless’ web cookie warnings and red tape, the Culture Secretary announced

Ministers are also said to be planning to shake up Britain’s data watchdog.

The Government is set to appoint John Edwards, who is currently New Zealand’s privacy commissioner, to head up the regulator.

Mr Dowden described the reforms as a ‘data dividend’ of Brexit and said the new British framework would be ‘more proportionate’.

He added that it would help to cut costs for businesses and enable ‘greater innovation’ which will also ‘drive growth and opportunities and jobs’. 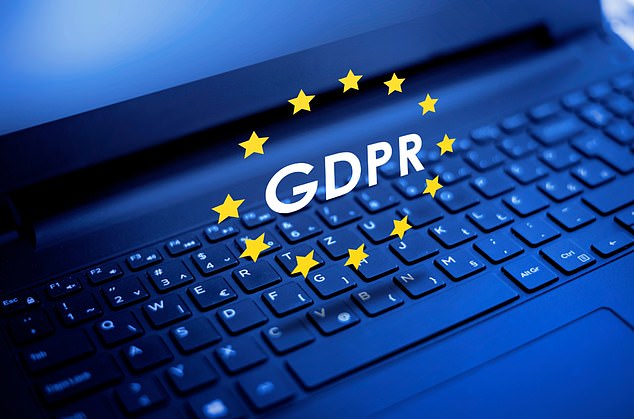 Mr Dowden said the Government intends to peel away from key parts of the EU’s General Data Protection Regulation, which came into force in 2018

However, the EU continues to trumpet GDPR as having improved data privacy standards across the world, meaning the UK could trigger fresh tensions with the bloc by deviating from the rules.

The plans will also likely be scrutinised by privacy campaigners who fear further online profiling of individuals and greater massing of personal data by big companies.

Mr Dowden said the reforms would bring an end to ‘pointless bureaucracy’ and ‘box ticking’ but would still protect people’s privacy.

In response to the announcement, Information Commissioner Elizabeth Denham said the UK’s data watchdog would help support the Government’s plans, but encouraged the pursuit of trust and transparency.

‘Data-driven innovation stands to bring enormous benefits to the UK economy and to our society, but the digital opportunity before us today will only be realised where people continue to trust their data will be used fairly and transparently, both here in the UK and when shared overseas,’ she said.

‘My office has supported valuable innovation while encouraging public trust in data use, particularly during the pandemic.

‘We stand ready to provide our expert advice and insight as part of any future Government consultation.’

As part of the announcement, the DCMS also revealed it was naming New Zealand privacy commissioner John Edwards as its preferred candidate to be the UK’s next information commissioner when Ms Denham leaves the post in October.

WHAT IS THE EU’S GENERAL DATA PROTECTION REGULATION?

The European Union’s General Data Protection Regulation (GDPR) is a data protection law that entered into force on May 25, 2018.

It aims to strengthen and unify data protection for all individuals within the European Union (EU).

This means cracking down on how companies like Google and Facebook use and sell the data they collect on their users.

The law will mark the biggest overhaul of personal data privacy rules since the birth of the internet.

Under GDPR, companies are required to report data breaches within 72 hours, as well as to allow customers to export their data and delete it.

Part of the expanded rights of data subjects outlined by the GDPR is the right for data subjects to obtain from the data controller confirmation as to whether or not personal data concerning them is being processed, where and for what purpose.

Further, the controller must provide a copy of the personal data, free of charge, in an electronic format.

This change is a dramatic shift to data transparency and empowerment of data subjects.

Under the right to be forgotten, also known as Data Erasure, are entitled to have the data controller erase their personal data, cease further dissemination of the data, and potentially have third parties halt processing of the data.

The conditions for erasure include the data no longer being relevant to original purposes for processing, or a data subject withdrawing their consent.

This right requires controllers to compare the subjects’ rights to ‘the public interest in the availability of the data’ when considering such requests.