TWO gunshots ring out and blood splatters across the floor as an innocent hamster is shot deadat point blank range with an air rifle.

This is just one of over 270 horrifying animal abuse cases the RSPCA have investigated over the last year involving weapons including guns, crossbows and catapults. 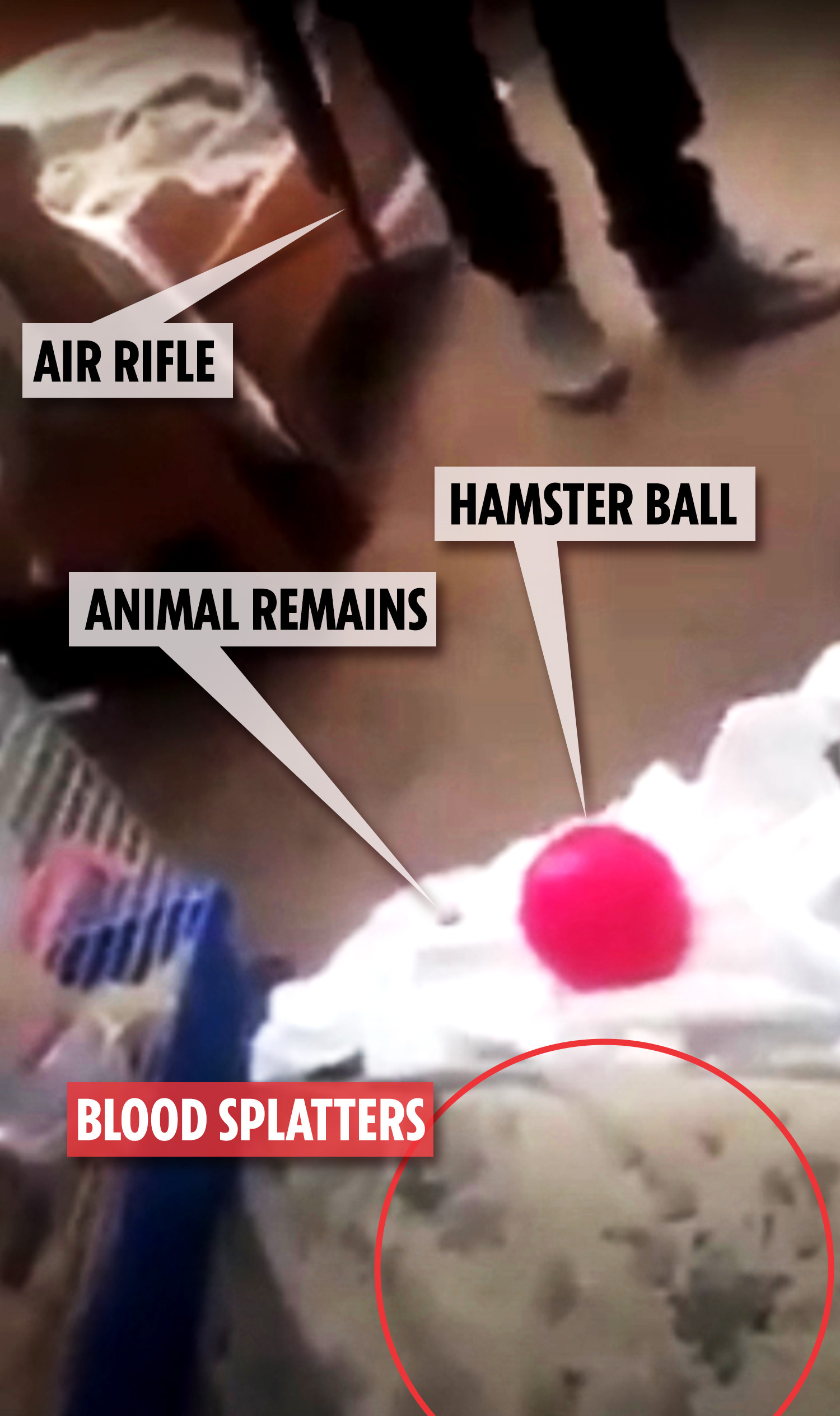 Thankfully, earlier this month – in what has been called a "victory for animals" – the maximum sentence for those who abuse animals was announced to increase from just six months to five years.

Chief Inspectorate Officer Dermot Murphy says: "We hope that this will act as a greater deterrent and will protect animals from those who may think it is funny to shoot at them with air guns.

“The devastation these weapons can cause an animal are terrible and these figures will only show part of the picture."

Lockdown boredom has been attributed to the high numbers of cruelty cases concerning such weapons.

"I know police forces reported a rise in anti-social behaviour [in lockdown] and it is awful to think some people, left bored or frustrated from being at home, might have turned to such callous acts as a form of entertainment," adds Dermot.

As the RSPCA calls for better regulation of air weapons, we investigate some of the horrific attacks that have occurred. 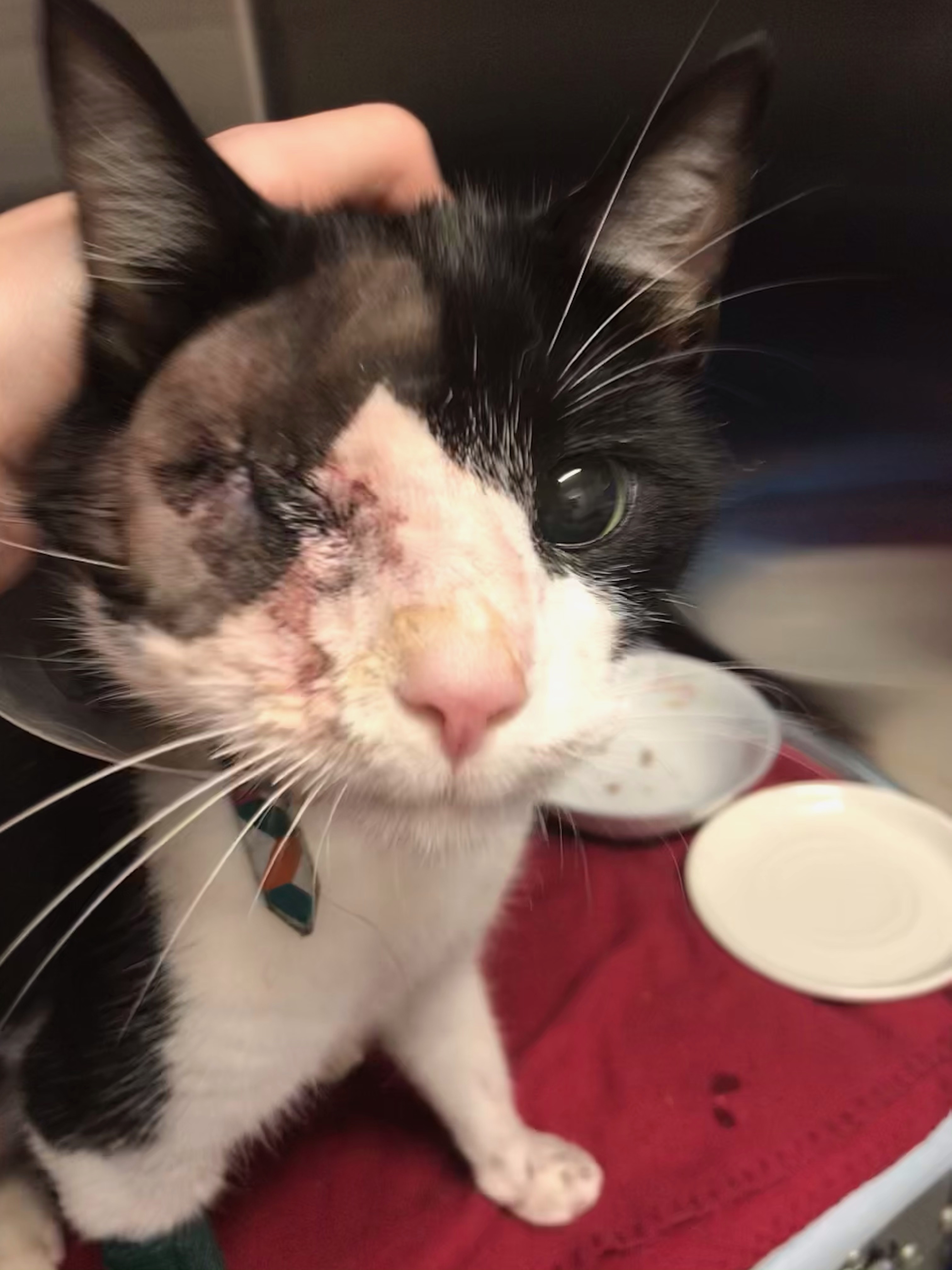 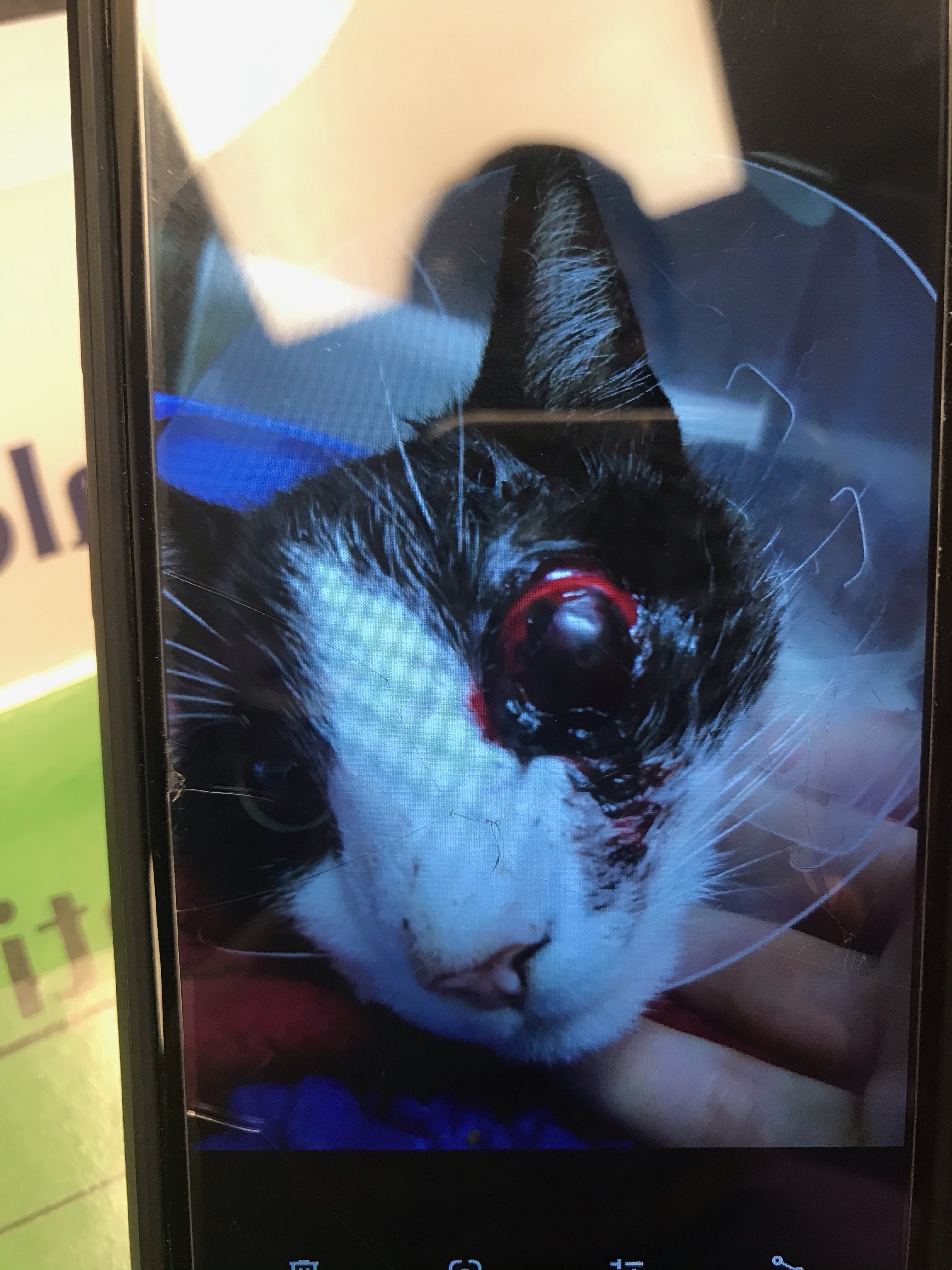 ‘Just the tip of the iceberg’

The RSPCA has been left shocked that, despite lockdown restrictions, the number of attacks on animals is so high – and there are real concerns that there could be hundreds more victims in cases that haven’t been reported. 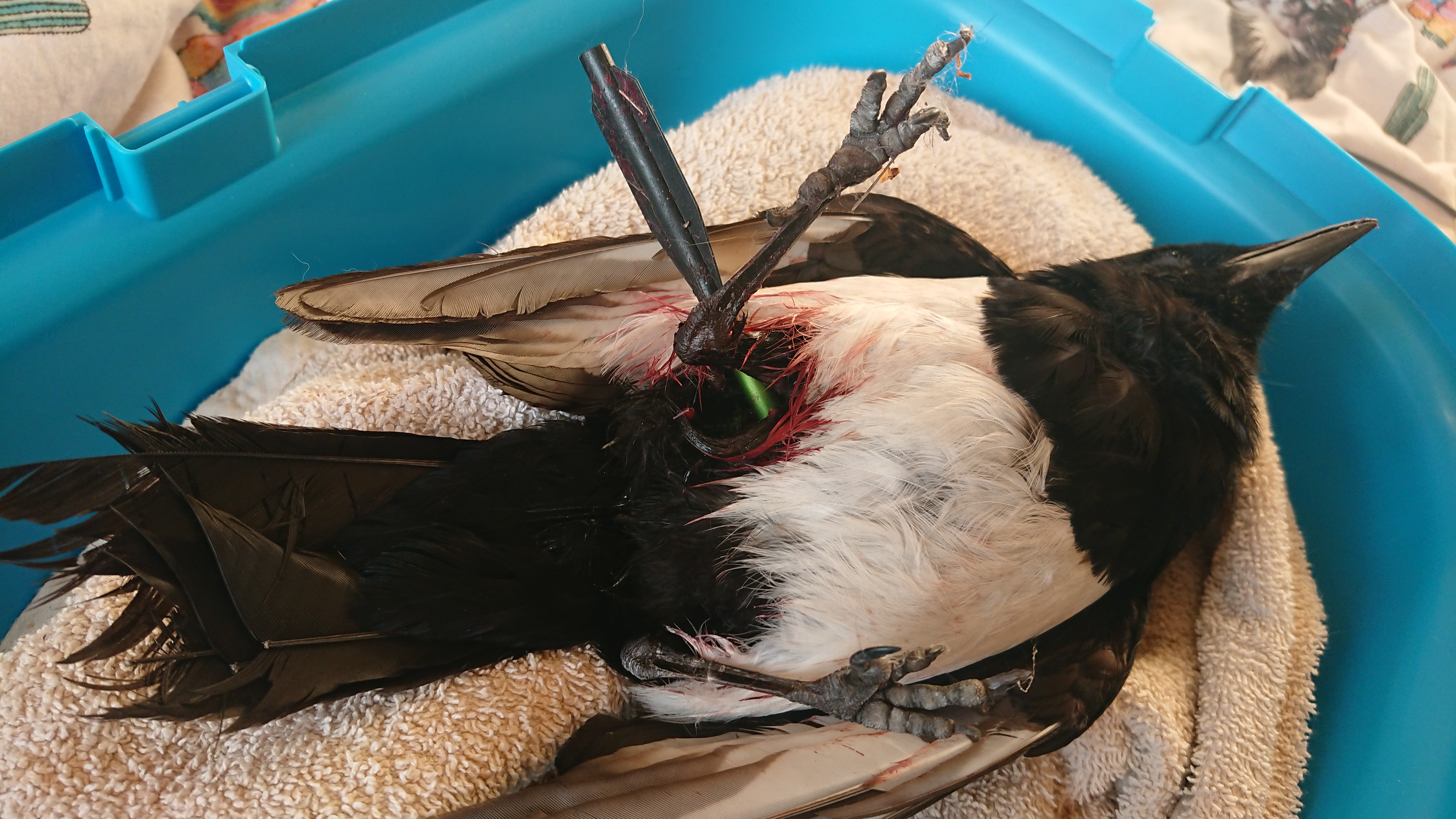 Wildlife officer Inspector Geoff Edmond says: “We were expecting the number of incidents involving air guns, crossbows and catapults to go down this year due to lockdown and people being stuck inside for so long – but shockingly this has not been the case.

“We have seen some horrific situations where wild birds have been killed or left with severe brain injuries due to these types of weapons.

"Gulls and pigeons that have been shot in the wing are left to suffer and may not die for days.

“We've also seen much-loved family pets cats that have been left maimed or been fatally injured thanks to these weapons too.

"We suspect that the reports we have are just the tip of the iceberg and there were actually hundreds more that just weren’t reported to us during lockdown. 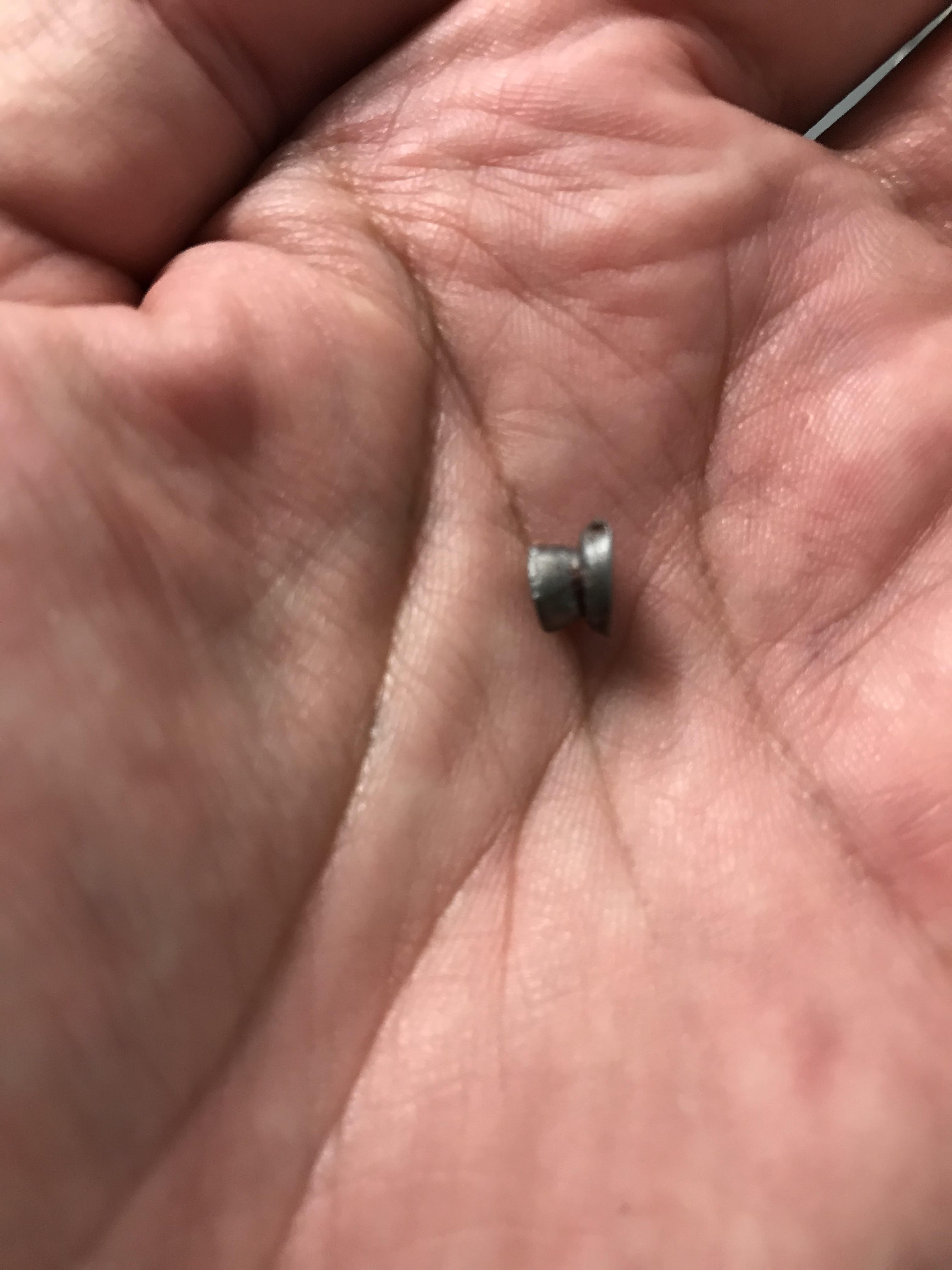 “The number of injuries and fatalities caused by catapults is very worrying and growing trend too. Animals should not be seen as something that can be used as target practice.”

One victim of what is believed to have been a catapult attack is seven-year-old siamese cat, Leo.

His owner Annabel Holdsworth found him crying in pain with a ball-bearing lodged between his eyes and protruding from his skull after being shot in the head near his home in Redhill, Surrey, in August. 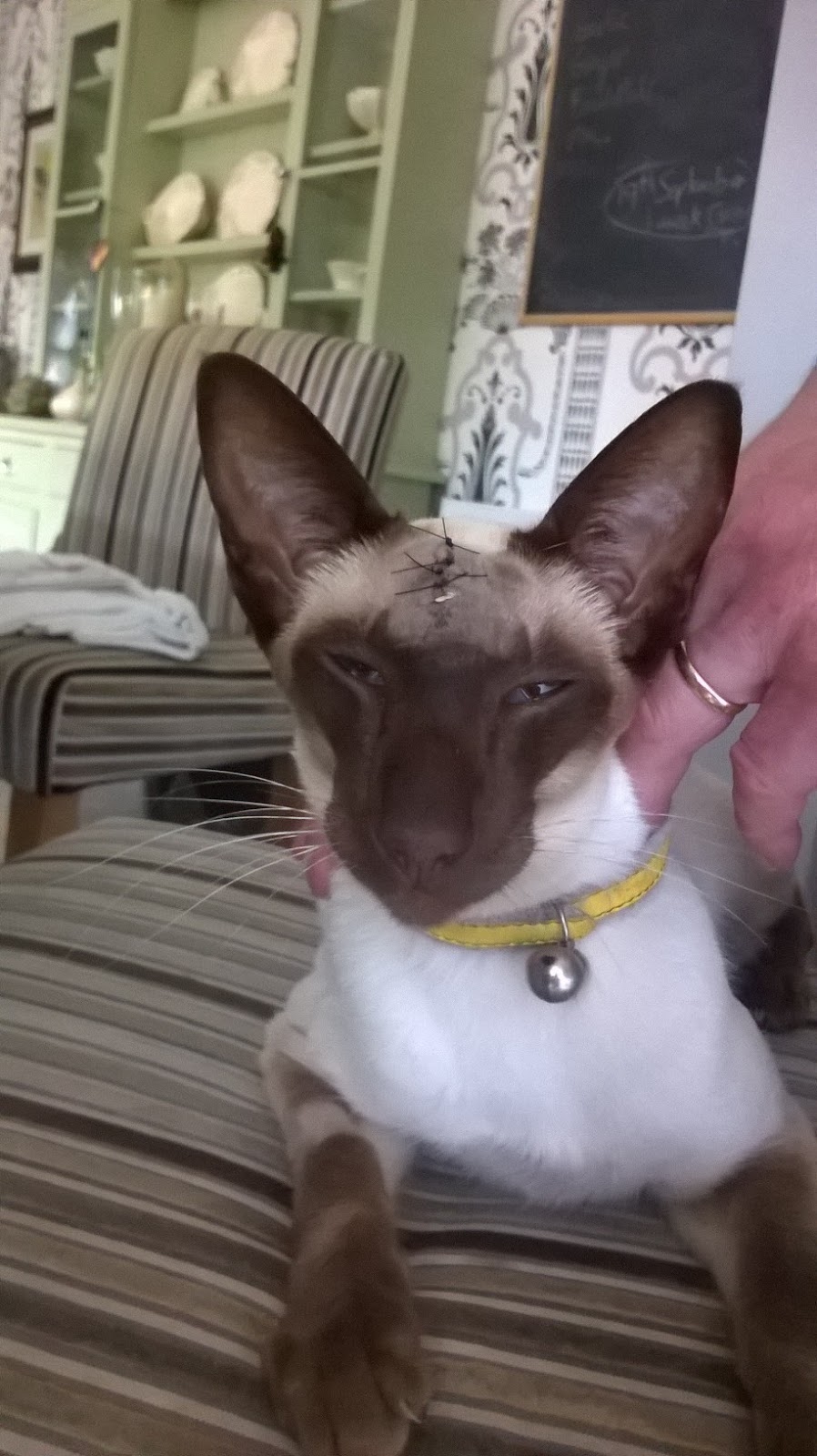 Annabel said: “I heard a strange noise and Leo was hiding under the desk.

“We managed to coax him out, gave him a cuddle and noticed his head. My husband thought it was a tick but we realised it was hard.”

They rushed him to an emergency vet where he went in for surgery to remove the ball bearing and needed four stitches.

Nine-year-old cat Milo is another casualty, and was rushed to the vets after his owners noticed he was behaving erratically.

Milo was left "millimetres from death" after X-rays found a pellet from an air rifle lodged under his spine, also piercing his lung, and two year old cat DJ lost an eye in a catapult attack.

Shot with a crossbow and left to die in agony

Disturbingly, some sick opportunists have also been using crossbows to kill animals.

Recently the RSPCA launched an appeal for information after a magpie was brutally shot with a crossbow in a Wolverhampton garden. 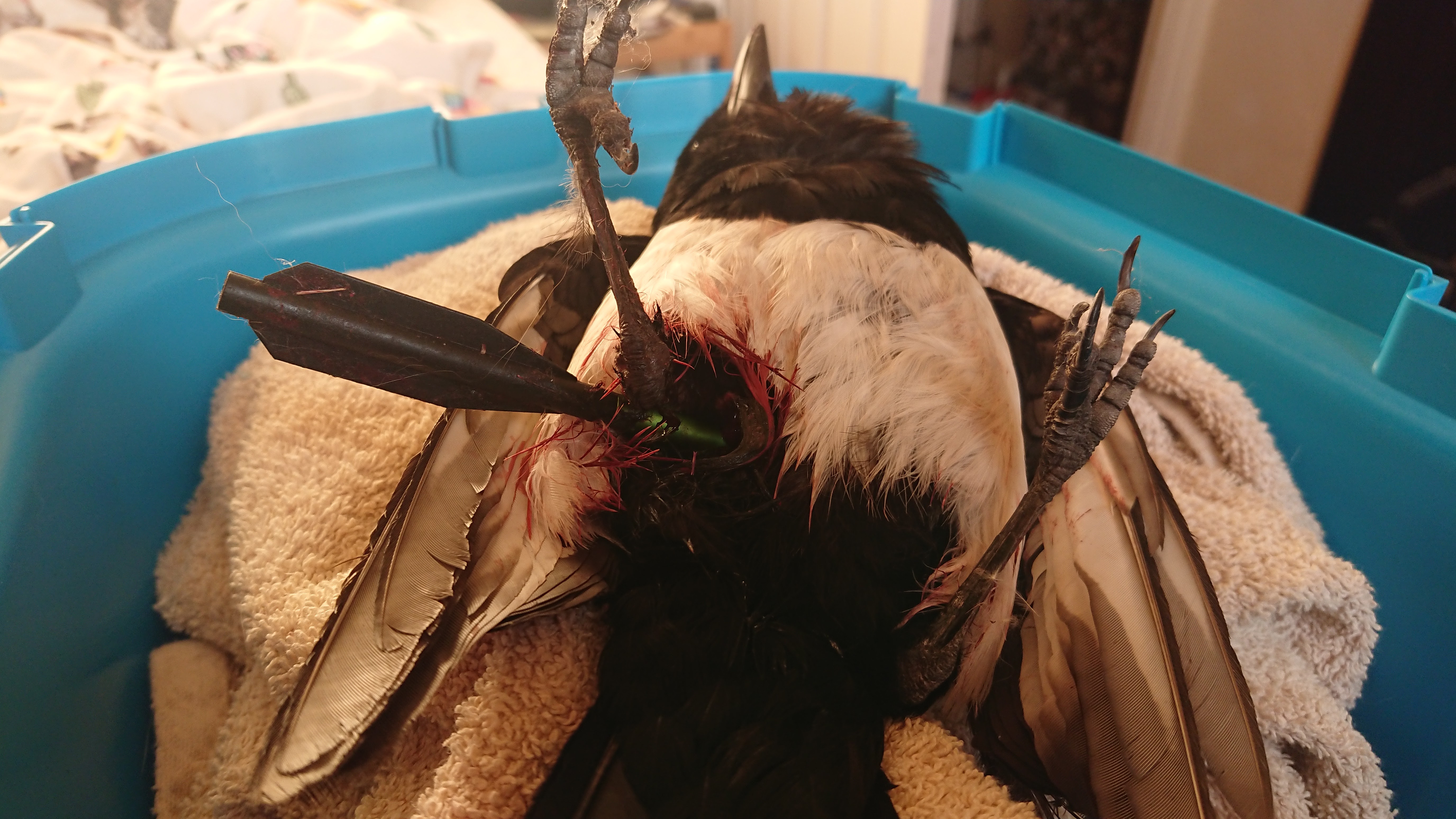 The shocking incident happened last June, when a woman heard a commotion outside her house.

She found a magpie dying on the floor with a crossbow bolt through her side, still alive but clearly in horrific pain, and sadly the poor bird died minutes later.

Inspector Laura Baker, who is investigating for the RSPCA, said: “This poor bird was left to die in agony from what appears to be a small crossbow bolt which was fired through her side.

“The suffering she must have endured until she died would have been awful.

“I am concerned that if someone is capable of this they may target other wildlife or even pets. There is also a real danger that a person could have got seriously injured as this is a residential area.”

‘A callous and cruel attack’

While air and BB guns are often thought to be relatively harmless ‘toys’, the damage they too can cause can be devastating. 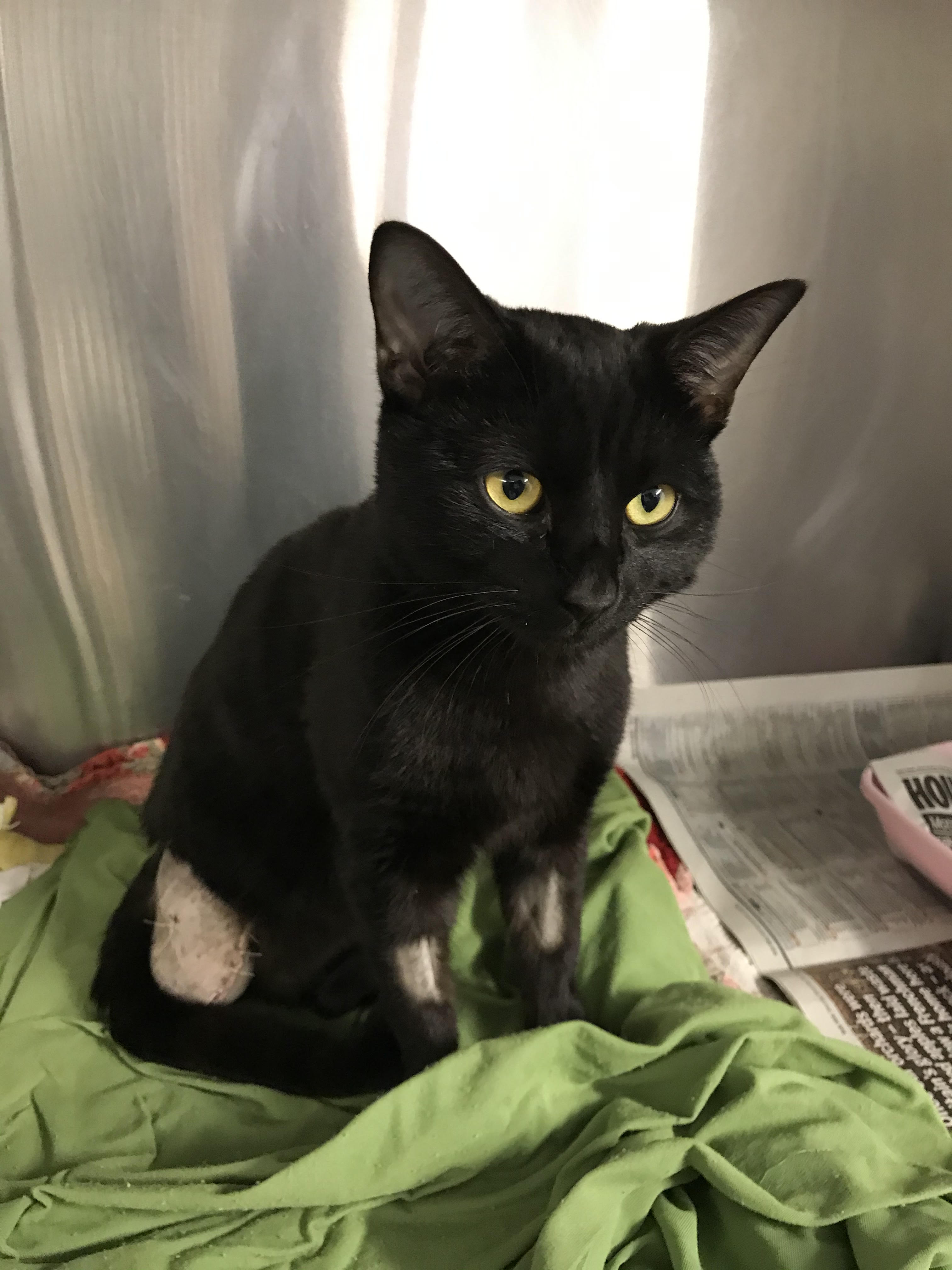 Rhubarb the cat was left with a severely broken leg that eventually had to be amputated following an air gun attack in London.

The air gun pellet had lodged in his right rear leg and shattered the bones leaving him in a lot of pain and distress and sadly his injuries meant he had to have his right back leg removed.

RSPCA inspector Darren Oakley said: "It's absolutely shocking to think that while communities rally together amid the coronavirus pandemic someone has thought it acceptable to take pot shots at a cat using a pellet gun." 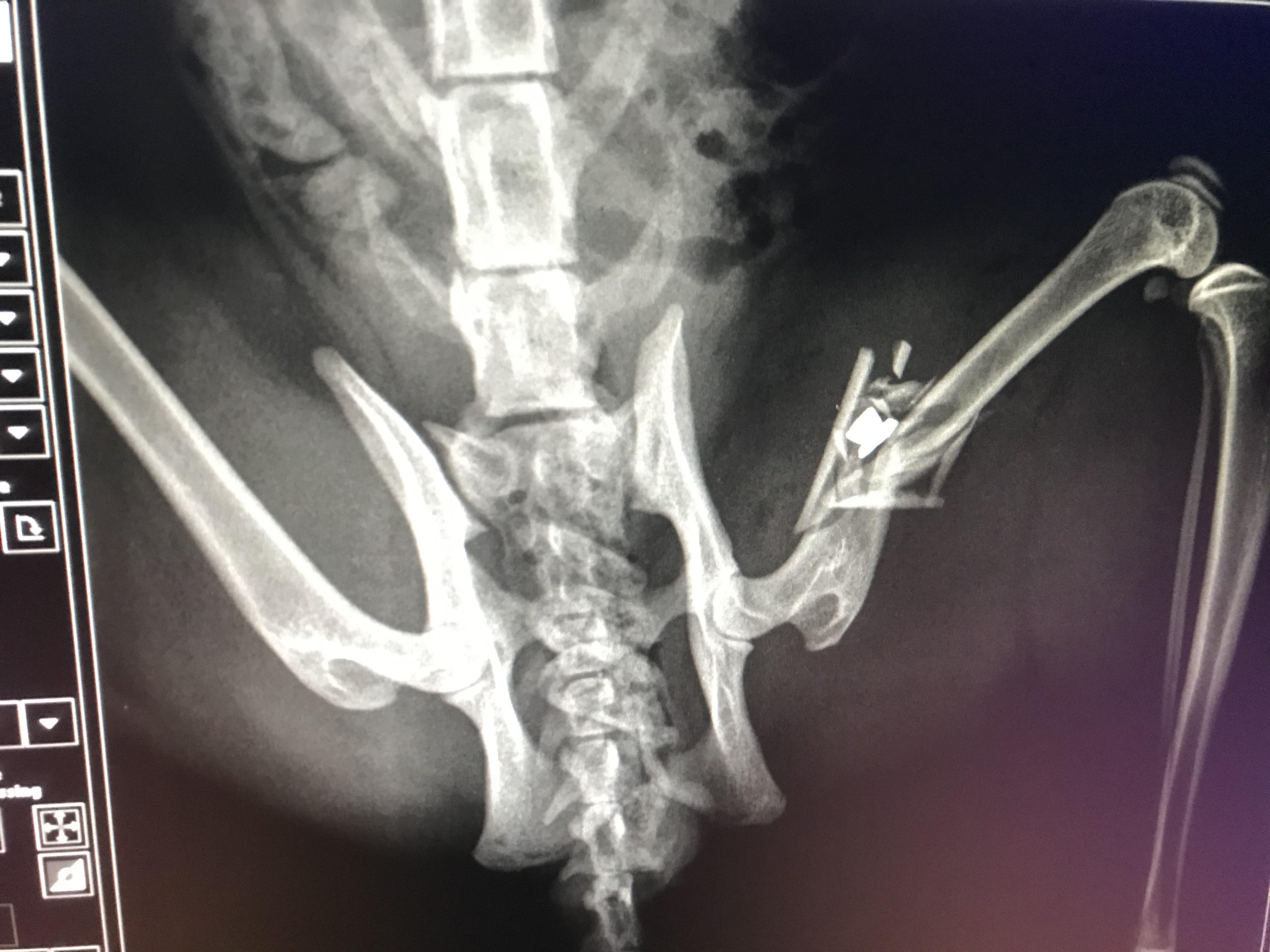 Not even baby animals are safe from sick thugs ‘playing’ with the dangerous weapons, and an investigation was recently launched after a six-week-old cygnet was fatally shot with a BB gun in its nest, in a ‘senseless’ killing.

The bloodied body of the cygnet was discovered in its nest on a golf course in Houghton-le-Spring in July.

The RSPCA was contacted and inspector Terri-Ann Fannon went to collect the body.

Terri-Ann said: “The member of the public who contacted us was extremely upset when she discovered the bird’s bloodied body laying on its nest.

“It’s utterly disgraceful to shoot and kill this beautiful bird and I’d like to remind people that, as well as being cruel and completely unnecessary, it is also illegal.” 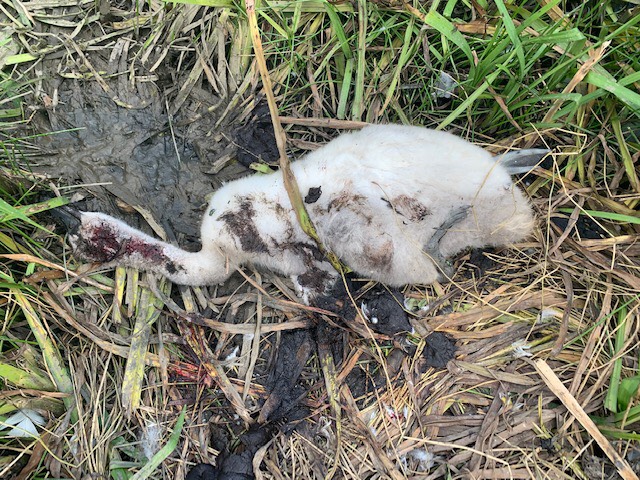 ‘These weapons are a danger for people too’

Because of this, the RSPCA is calling for tighter controls on air weapons.

They say this, along with better education and basic safety training when buying an air gun, could reduce the number of animals harmed in this way.

Chief Inspectorate Officer Dermot added: “We believe that if a certification system for these weapons were introduced then it would make it easier to trace the weapons and find people who use them to injure, maim and kill animals.

“We’re calling for mandatory licensing of air guns and also want to see improved enforcement of air gun legislation as well as better, more targeted, education and explanation of the law for those buying one.

“These weapons are not only dangerous for our pets and wildlife, but also potentially dangerous for people too and it’s time there was more control over their sale and use.”

For more information or to donate to the RSPCA, visit their website