How your Christmas chocolate is forcing African farmers into slavery 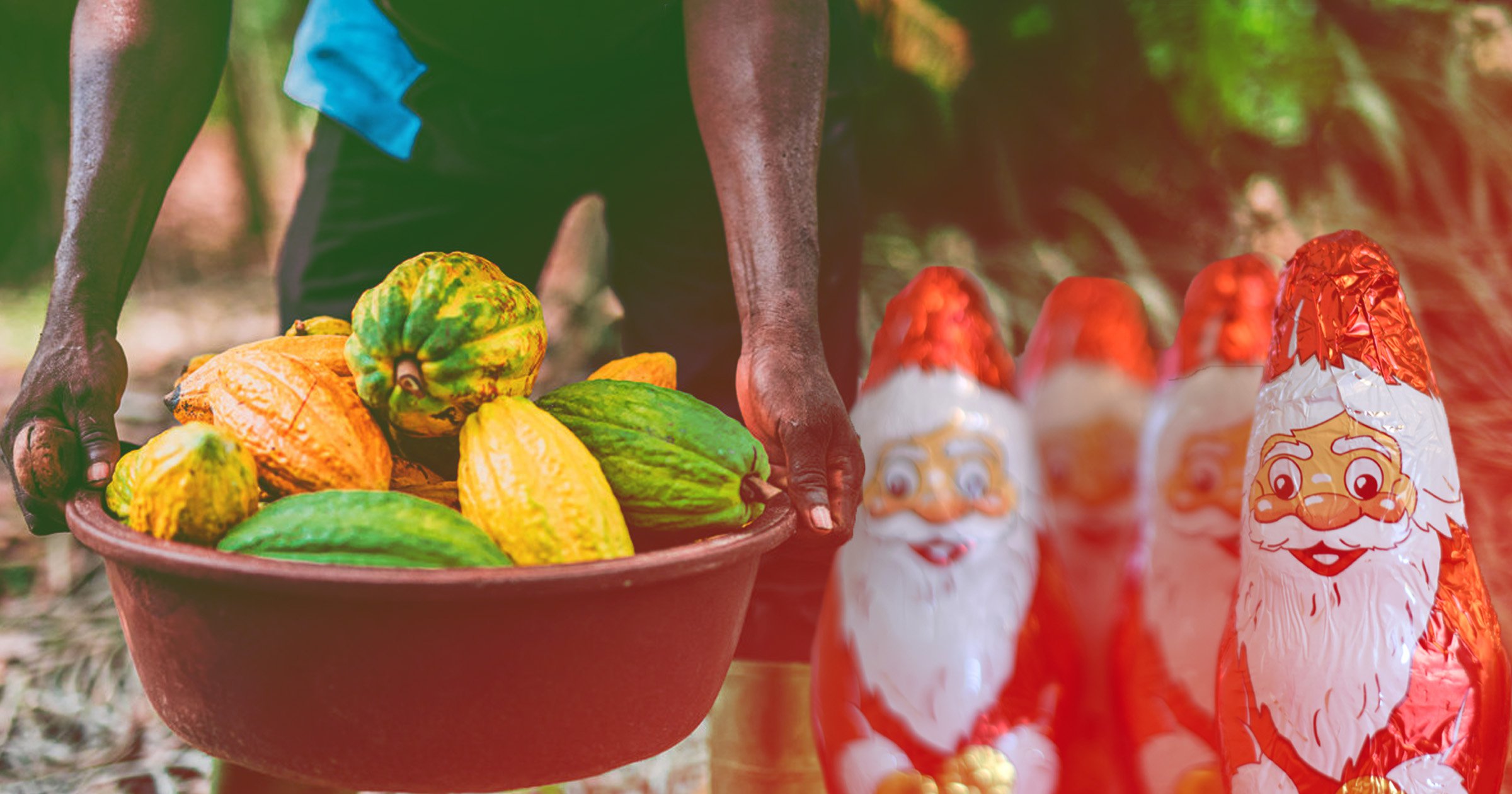 Christmas is a time for, among other things, indulgence. And what could possibly be more decadent than chocolate?

And of course, no one would dare promote a Christmas without chocolate.

But the treats we choose to buy this year will help determine whether more than two million cocoa farming families in West Africa can eat, send their children to school, pay their workers and protect their forests.

This is because the international price of cocoa is too low – according to farmers, activists and some industry experts.

Assata Doumbia, who runs a cocoa and rubber farm near Meagui, in the Ivory Coast, told Metro.co.uk how her family suffered when prices dropped drastically while she was still a child.

She said she, her siblings and her cousins always enjoyed helping her uncle on his plantation during the school holidays.

‘We planted peanuts, picked oranges that we could sell in the market, and at the end of the holidays we took that money to go to town. We did it happily,’ she said.

But then the price of cocoa went down and Assata’s uncle could no longer afford to send the family’s children to school.

‘We had three meals a day and then, we could eat only once a day,’ she said.

This is what happens to many families when the price of cocoa goes down. There are currently 275 children in Assata’s community who are not in school.

One woman Assata knows was left with a three-hectre cocoa field and five children after her husband died.

Besides being unable to afford to send her kids to school anymore, the mum has no money to pay anyone to work the farm.

‘The woman cannot even cover the cost of her production and maintain her field,’ Assata said.

Assata eventually grew up to be the only person in her family who was willing to get into the cocoa industry and take over her uncle’s farm after he died.

While cocoa has long been considered a ‘men’s crop’ about 58% of West Africa’s cocoa workforce are actually women, the Fairtrade Foundation estimated last year.

But there are still too few women with ‘decision-making power’, according to the report, and Assata is one of them.

She is now the president of the cooperative enterprise of the Méagui farmers (ECAM), which helps farmers to partner with chocolate companies that will agree to pay more for their cocoa.

The price of cocoa dropped by a staggering 18.5% in the Ivory Coast – partially responsible for more than 60% of the world’s cocoa – at the beginning of last month.

This is expected to plunge families who are already living below the poverty line further into devastation.

To be able to put meals on the table, send kids to school and invest in farms, producers would have to be able to sell their cocoa for £1,648 a tonne, according to data collected by Tony’s Chocolonely’s head of impact Paul Shoenmakers.

After the most recent price drop, farmers can only get £1,091 for a tonne of cocoa – £557 less than families need to keep kids in school and not working on farms.

‘There is a direct link between extreme poverty and child labour and modern slavery.

‘Poverty is the root cause of the problems in cocoa – whether its child labour or modern slavery or deforestation – these people are poor, they have no choice.

‘If we want to solve these things, we have to tackle the problem and the thing we need to tackle is “pay more for cocoa”.’

Fair trade chocolate you can buy on the high street

Mr Shoenmakers calculates that the chocolate industry would have to pay £750 million on top of their current expenses to ensure the cocoa industry went slavery and child labour-free.

While this is clearly a lot of money, it is only 0.7% of the chocolate market’s total revenue.

Chocolate companies have long been under pressure to eradicate child labour and extreme poverty from their operations.

But this is difficult to tackle when these issues persist while businesses are paying the legal, officially established price for cocoa.

On top of this, many companies do not actually know which farms their cocoa comes from because of the complicated way cocoa supply chains work.

But Assata believes regular people can help by simply choosing to buy ‘good quality chocolate’ because ‘the price is the responsibility of everyone’.

She said: ‘Good quality cocoa is part of our sustainability agenda, and allows us to follow good agricultural practices, avoid deforestation, get the right price and send our children to school.

‘So, what I can tell the consumer is that they should make sure the chocolate they buy is of good quality’.