‘I dream about you Nigel!’ Liz Hurley confessed her affections for Farage, claim his camp as the Brexit Party maintains its 18 point lead over the Tories ahead of May 23 EU elections

Liz Hurley allegedly confessed her admiration for Nigel Farage and told him that she ‘dreams about him’ as it was revealed the Brexit Party today opened up an 18-point lead over the Tories.

The claim about the supermodel, 53, was made by ‘friends’ of Mr Farage, 59, as he revealed a new clean-living regime with pints swapped for red wine while he campaigns around Britain.

His lifestyle change came in the wake of this 2010 plane crash and heavy drinking in previous elections – combined with a more professional American-style approach to politics – and he believes it has helped his anti-EU movement surge in the polls.

Today a new survey for Good Morning Britain found that 30 per cent of people intend to vote for the Brexit Party in the May 23 European elections, with the Tories far behind on 12 per cent and Labour on 24 per cent.

And while Mr Farage campaigns around the nation – landing in Wales today – a source told the Telegraph that ‘women are queuing up to meet him’.

The source added: ‘Nigel said that Liz Hurley once told him at a party: ‘I dream about you Nigel!’ Women are just sort of drawn to him – but then so are men’.

The supermodel is a known Brexiteer having already backed the campaign to leave the EU by stripping off on the eve of polling day in 2016 declaring: ‘No whinging from the losers’. 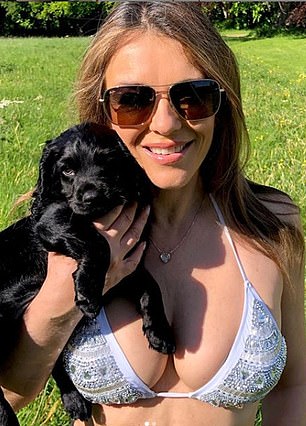 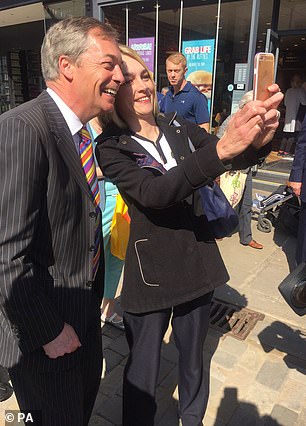 Liz Hurley, pictured this week enjoying the sun on Instagram, reportedly told Nigel Farage (right in Pontefract on Monday) ‘she dreams about him’

Mr Farage, whose new party is set to give the Tories and Labour a bruising on May 23, has been in a relationship with 39-year-old French former waitress Laure Ferrari, ‘for around a decade’, according to the Telegraph. 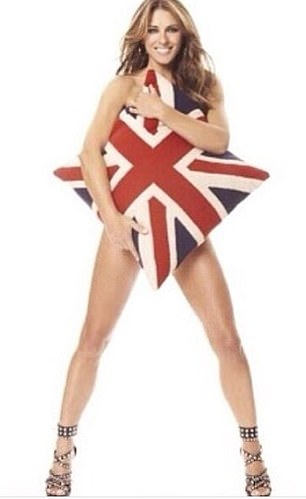 In 2017 his second wife Kirsten revealed they were living ‘separate lives’ and he had moved out of their Kent home.

‘Nigel is not a misogynist – he loves women, but he is an old-fashioned sexist’, a Brexit Party insider claimed.

‘There are women queuing up to meet him. Mainly it tends to be women of a certain age these days’.

Mr Farage is in Wales today for another Brexit Party rally, but will not be going to the pub afterwards having decided to get ‘off the beer’ for the sake of his health – but does have a glass of Rioja from time to time.

He’s also doing fitness work after long days of campaigning for UKIP in general and European elections with his second wife Kirsten saying that she feared his drinking, smoking and long working hours could make him seriously ill.

He told the Telegraph today: ‘I did myself a lot of damage but it helps if I do exercise little and often. It’s made a massive difference. I’m not going to the pub every day. I had enough of not feeling good. I was just not physically as fit as I need to be’.

Ministers now fear a bloodbath at the hands of Nigel Farage’s Brexit Party next week when the country goes to the polls for European parliament elections that would not have taken place if the UK had left the EU on time.

A YouGov poll this week found that the Tories were on course to slump to fifth place behind the Greens in next week’s elections.

The survey for the Times put the Brexit Party on 34 points, well ahead of Labour on 16, the Liberal Democrats on 15 and the Greens on 11. The poll put Tory support on just 10 per cent.

After his second marriage ended two years ago, Mr Farage said he was ‘separated and skint’.

He has used his own cash built up from lucrative speaking tours in America in what he called the ‘start-up phase’ of the Brexit Party before securing huge donations from disillusioned Brexiteers. 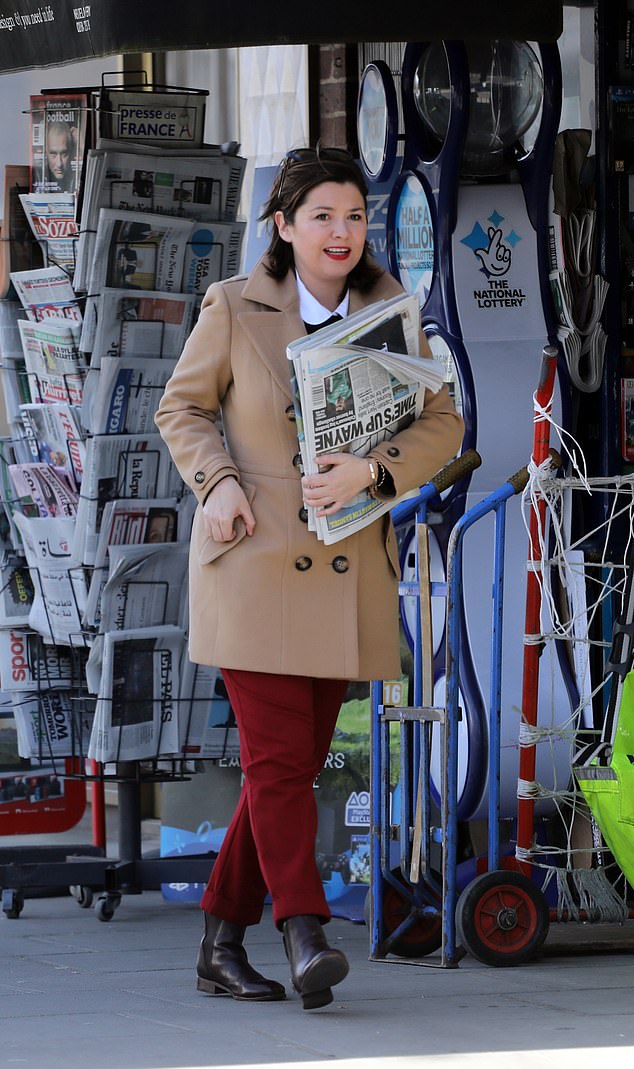 Mr Farage, whose new party is set to give the Tories and Labour a bruising on May 23, has been in a relationship with 39-year-old French former waitress Laure Ferrari (pictured), ‘for around a decade’, according to the Telegraph 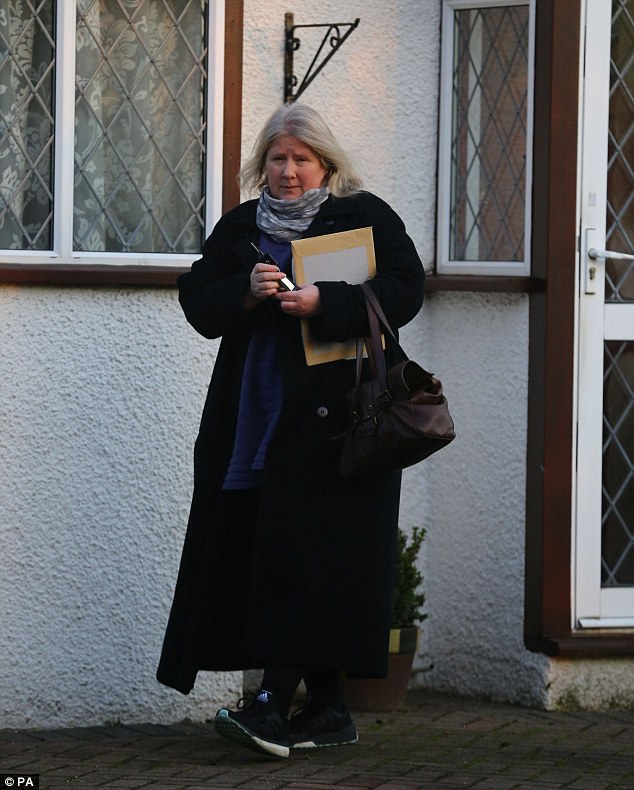 Kirsten Farage, the second wife of former UKIP leader Nigel Farage, leaves the family home at Downe, Kent, after they officially split in 2017

Financier Jeremy Hosking, 60, a former Tory donor who owns a major share of Crystal Palace Football Club, said he has given £200,000 over the past two to three weeks.

Mr Farage has said the party had already raised ‘well over’ £2million to fight the European contests, with 90 per cent of it from some 88,000 people paying a £25 fee to become registered supporters.

Away from work he has found love with Laure Ferrari, who once branded English women ‘drunken tarts’ in an email to a woman previously named as Mr Farage’s mistress.

Miss Ferrari began working for Mr Farage and fellow Ukip MEP Godfrey Bloom after meeting them in the Strasbourg restaurant where she waited tables in 2007.

Describing the meeting she said: ‘I met these two MEPs and we started talking about politics. The two Brits have no hierarchy and neither of them comes from a political background.’

In June 2013, Miss Ferrari posted on Twitter a link to a newspaper feature asking ‘Why do more women want to bed Nigel Farage over David Cameron?’

Miss Ferrari spoke alongside UKIP politicians and other Brexit campaigners at public events in Dorset and Norfolk ahead of the 2016 EU referendum and has moved in with Mr Farage.

In 2017 he described himself as ‘separated and skint’  as he walked away from his marriage to second wife Kirsten. They have two children.

Mrs Farage admitted at the time they have been living separate lives ‘for years’ and ‘that suits everyone’. Mr Farage remained silent but a month earlier, when asked about the state of his marriage, he replied: ‘We get by and bumble along, like most people.’

In 2014 he was accused of having had an affair with Annabelle Fuller, then 32, one of his spin doctors.

According to the Mirror,  Mrs Farage confronted her at a UKIP election party and allegedly told her: ‘I will have security drag you out by your hair if you don’t leave’.

Both Farage and Fuller have vehemently denied any affair.

Farage married German-born Kirsten Mehr in 1999 after his divorce from first wife, Gráinne Hayes, an Irish nurse and the mother of his eldest two children.

They met after he had serious car accident at the age of 21 because Ms Hayes was the nurse who treated him in hospital for months where he was in traction and unable to have a bath.