‘I was scared he was going to bleed out’: Teenager seriously injured in Carlton gelato store stabbing

A teenage boy is in a serious condition in hospital after he was allegedly stabbed in the neck in front of terrified onlookers at a popular Carlton gelato outlet on Monday night.

“Sarah”, who was sitting outside Pidapipo on Lygon Street at the time of the attack and requested not to use her real name, told Nine News Melbourne the teenager ran towards the shop barefoot chased by seven other males.

“Honest to God at the start, it looked like they were going to rob the shop, so I didn’t even know what was going on at the start.”

She said the men, who ran to the shop from across the road, were wearing dark clothing and face masks. One also carried a pair of blue and white sneakers in his hand.

Within minutes one of the men stabbed the 17-year-old in the neck and the group fled the scene on foot, she said, leaving the teenager with a serious wound. 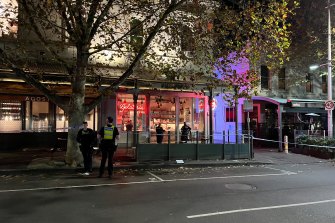 Police cordoned off a section of Lygon Street following the alleged stabbing.Credit:Aleigh McMillan

“I turned around and told the young boy: ‘hold your throat, don’t faint’ because I was scared he was going to bleed out,” she said.

“I have not seen nothing like this. That was the scariest, most horrible thing I’ve seen in my 26 years of living.”

The witness said workers from nearby businesses rushed to help, using a cloth to stem the bleeding until the ambulance and police arrived.

The teenager was then rushed to Royal Melbourne Hospital by ambulance, where he remained in a serious condition on Tuesday afternoon.

Security footage from a nearby business obtained by Nine News Melbourne shows a person dressed in a hoodie wielding what appears to be a bladed weapon around the time of the attack.

In a statement, Victoria Police confirmed officers were called to the Lygon Street gelateria about 7.30pm on Monday, where they found the 17-year-old with a cut to his neck.

A section of Lygon Street was cordoned off as officers spoke to witnesses and collected evidence from the crime scene.

“On arrival, officers were told there had been an altercation between a group of males,” police said.

Police are yet to make any arrests in relation to the alleged stabbing.

Anyone with information about the incident should contact Crime Stoppers on 1800 333 000 or submit a confidential report at www.crimestoppersvic.com.au.