‘I will very, very, very probably do it again’: Trump teases 2024 run at Iowa rally where he complains he ‘got screwed’ in the last election and shares a Biden gaffe-reel with crowd

Former President Donald Trump came close to announcing a 2024 White House bid at a Thursday night rally in Iowa – which holds the nation’s first presidential contest – and on the anniversary of his 2020 election loss.

He told the riled up Sioux City crowd to ‘get ready!’ ‘That’s all I’m telling you, very soon,’ he added.

Trump also entertained his audience by sharing a gaffe-reel featuring President Joe Biden with supporters, showing footage of the Democrat tripping up Air Force One’s stairs and other awkward moments.

Ever the reality TV star, Trump played dramatic and sinister music throughout the final portion of his speech, using a melody associated with the QAnon movement.

He encouraged his supporters: ‘If you want safety for your family and security for your community, throw every Democrat the hell out of office and vote for Republicans up and down the line.’

But the bulk of the rally was devoted to how he’d been wronged. 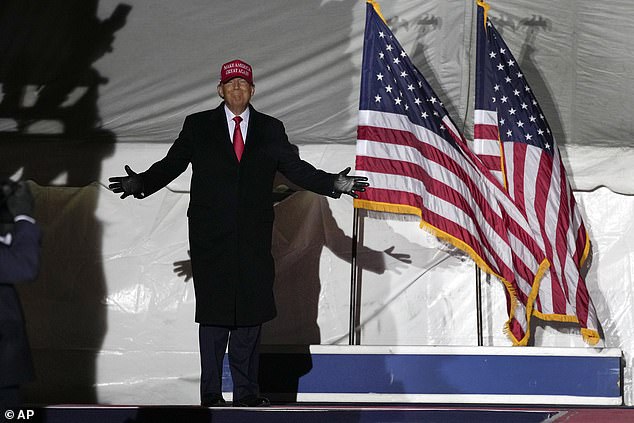 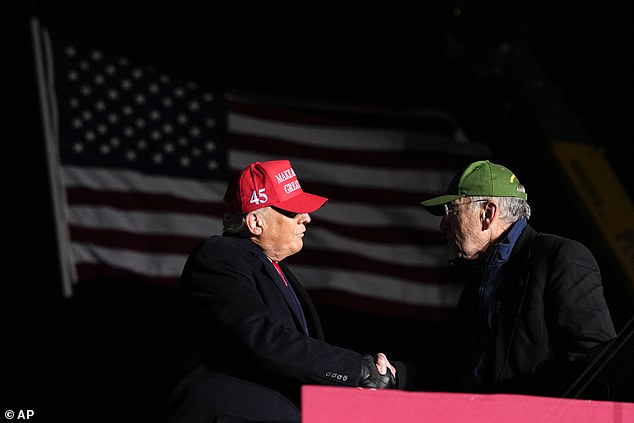 Trump still boasted – falsely – that he was the winner of that election.

‘I did much better the second time than I did the first. Getting millions more votes in 2020 than I got in 2016 and likewise getting more votes than any sitting president in the history of our country thus far,’ Trump said.

He also mentioned the slew of investigations encircling him.

‘Biden and his left wing handlers are turning America into a police state like something straight out of a communist country. The radical Democrats are locking up pro-life activists, persecuting their political opponents – nobody can believe this is happening,’ Trump said. ‘They even raided Mar-a-Lago. They raided Mar-a-Lago.’

Trump’s Florida home and private club Mar-a-Lago was searched by the FBI in August under suspicion that the ex-president had held onto classified documents after his White House tenure.

Hundreds of classified documents were found during the raid.

Later in the rally he returned to the raid adding, ‘It is a nice house, you have to say.’

Trump also pointed to a decision made only hours before by a New York judge – who appointed an independent monitor to oversee the Trump Organization’s financial transactions, as part of New York Attorney General Letitia James’ ongoing civil suit against the ex-president’ company.

‘And just moments ago, a radical-left lunatic judge in New York City, who’s totally controlled by my worst enemies in the Democrat Party – and by the New York attorney general, there’s another beauty – who was given his position by them at the request of the out-of-control attorney general who’s let violent crime in New York rage in the state, including murders, robberies, rape and drugs at levels never seen before – started a process of property confiscation that is akin to Venezuela, Cuba or the old Soviet Union,’ Trump said.

The ex-president also pointed to the investigation in Georgia over Trump and his allies pushing false election fraud claims. 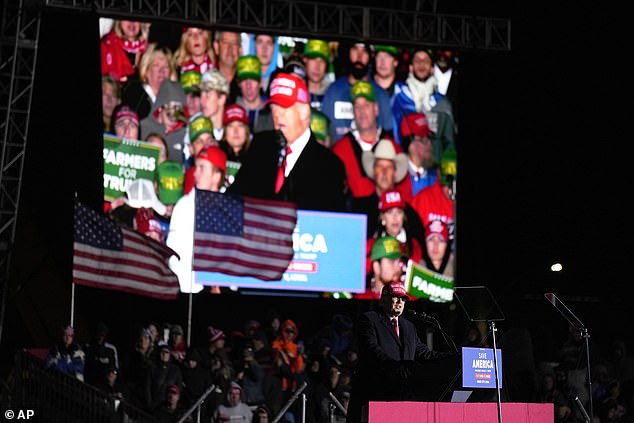 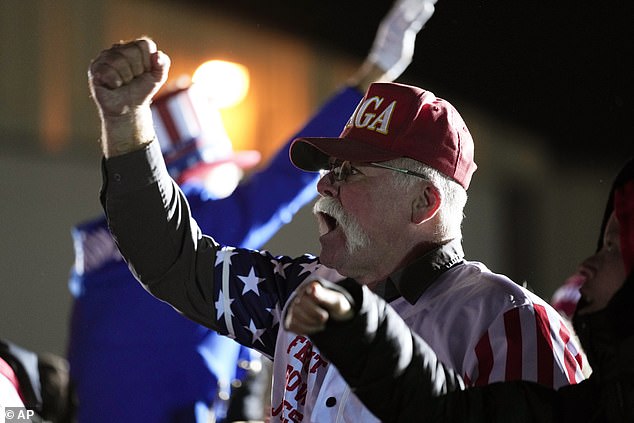 A supporter of former President Donald Trump wearing a ‘MAGA’ hat reacts to the ex-president’s speech during the Thursday night rally in Sioux City, Iowa

‘A local left-wing DA in Atlanta is after me for an absolutely perfect phone call,’ Trump said. ‘I would say even better than better than the Ukrainian call to the president.’

Trump described the call in question, where he asked Georgia’s Secretary of State Brad Raffensperger to ‘find’ the number of votes he’d need to win the state, as a query on ‘election integrity.’

He spoke of the great progress that was being made under his leadership.

‘You had no problems with anything, frankly,’ he told the crowd.

‘And then unfortunately we had a roadblock with this character, these people that are there now,’ he also said. ‘It’s a disgrace.’

He hit the Democrats for ‘indoctrinating our children with twisted race and gender lunacy in our schools.’

But he suggested the Republicans would be successful in retaking the House.

‘And we’re going to end crazy Nancy Pelosi’s political career once and for all,’ he said, using the nickname he gave her years ago, despite the recent hammer attack on her husband, Paul.

He also told Grassley, who made remarks before and during Trump’s appearance, that he was going to be easily re-elected.

‘I think he’s not going to have a problem,’ Trump said. ‘But now I know after this tonight,’ he said, gazing into his crowd. 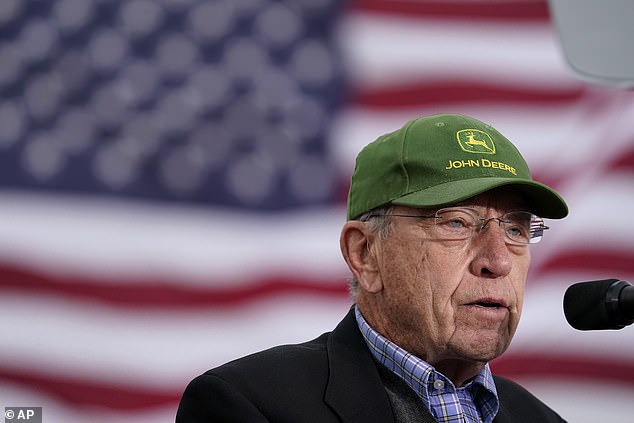 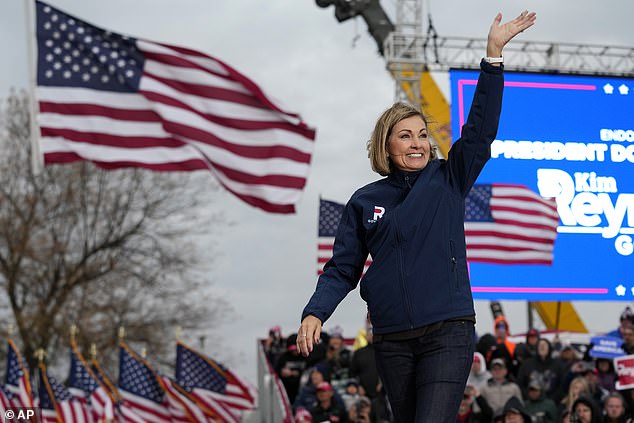 Of Biden, Trump said, ‘You could take the five worst presidents in American history and put them together and they would not have done the damage Joe Biden has done to our nation in just two years.’

He then asked the crowd if they’d like to see ‘a little clip on a nice expensive monitor,’ turning the audience’s attention to the Jumbotron screens.

The gaffe-reel showed a number of Biden’s slip of the tongues.

‘It’s not really anything that’s funny because our world is in a very dangerous place with nuclear weapons,’ the former president warned.

Trump pushed that the U.S. could end up in World War Three under Biden’s leadership.

‘We could end up in world war three and World War Three will blow everything away because World War Three has nuclear weapons like nobody’s ever seen,’ he told the crowd.

He pointed to both Russia and North Korea as threats, remarking of the latter that ‘we got along very well,’ as he thrice met North Korean leader Kim Jong Un during his presidency, but wasn’t successful in inking a denuclearization deal.

As for the Russian assault on Ukraine, Trump called it ‘horrible thing,’ but suggested the U.S.’s border crisis was worse.

‘This year, more Americans will die of Fentanyl and drug overdoses than the number of Ukrainians killed in the gruesome and bloody war – that by the way would have never happened,’ Trump said.