Ian Wright has revealed how he suffered ‘Guantanamo-style’ abuse at the hands of his violent stepfather – who made him face the wall whenever his beloved Match Of The Day came on TV.

The former football star-turned pundit says as a child he would be made to stand with his nose to the wall when the show’s iconic soundtrack began to play.

And the 57-year-old, who now regularly features as a pundit on Match of the Day, said he would be verbally abused if he turned round to watch it.

In an interview ahead of a new BBC documentary, Wright also reveals how he would sleep facing the same wall to try and escape the sound of his stepfather beating his mother.

Speaking to the Radio Times ahead of the programme, Ian Wright: Home Truths, he said: ‘The wall was horrible. It was bloody freezing cold, and at the time I was very asthmatic

‘The bed was up against the wall, so I was lying right next to it, and my ears were being covered.

‘It was a horrible, claustrophobic thing. I don’t like thinking about it.’ 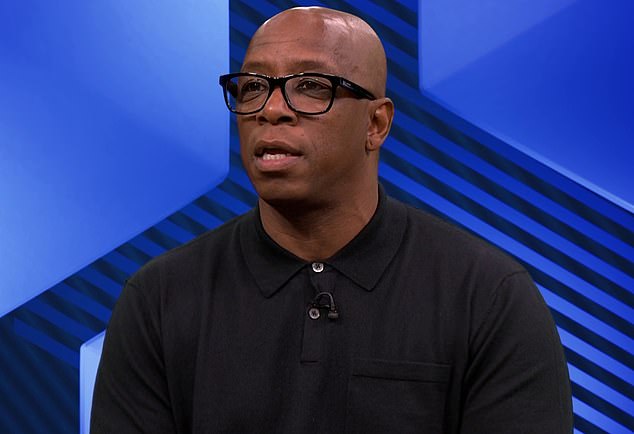 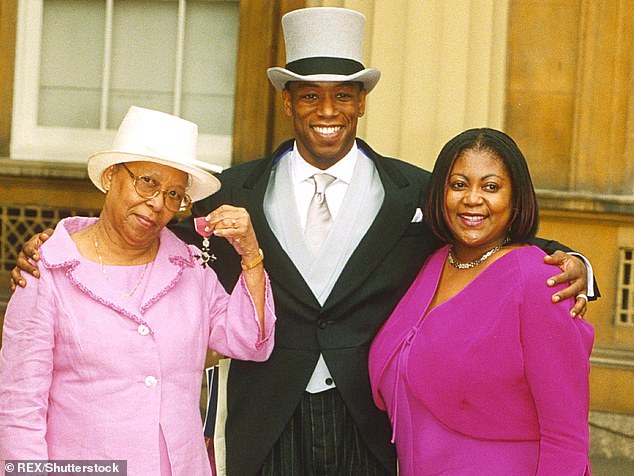 In a tearful interview for a new BBC documentary, Wright (pictured in 2002 receiving his MBE with mum Nesta (left) and then wife Debbie (right)) also revealed how he would sleep facing the same wall to try and escape the sound of his stepfather beating his mother.

Wright has previously spoken about his troubled childhood – which saw him overcome deprivation and an abusive home life to become a professional footballer.

Wright also had a spell in prison – for non-payment of driving fines – before being signed by Crystal Palace and later Arsenal.

He would go on to score more than 200 top-flight goals, while winning 33 England and scoring nine goals for the national side.

And after retiring from the game in 2000, Wright would forge a career as a tough-talking pundit for TalkSport and later ITV and the BBC – as well as a memorable appearance on I’m a Celebrity Get Me Out of Here.

Wright, who was awarded an MBE in 2002 for services to football, is now a regular guest pundit on Match of the Day.

However the show still brings back the memories of his tough childhood – spent with a stepfather who he once described as a ‘weed-smoking, gambling womanising kind of guy’. 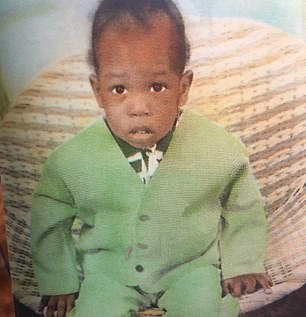 ‘Every time I’m on and the music starts, I get a feeling, because that was pure cruelty,’ Wright said.

‘He did it just because he could. In one way it’s empowering — look at how Match of the Day first came into my life, and what I’m doing now.’

In the new BBC documentary, set to air on May 6, a tearful Wright returns to his old family home in the Honour Oak Estate in Brockley, south London.

Wright grew up with his mother and stepfather, after his biological father left when he was 18-months old.

During the show, Wright becomes emotional as he speaks about how his family slept together in the same room and how he would hear his stepfather abusing his mother.

He speaks about how his brother, Morris, would cover his ears to shield him from the noise of punches.

Wright told the Radio Times: ‘My mum often had black eyes. He (my stepfather) would rough you up.

‘Shout at you, intimidate you, swear at you. He was really strong, big and overpowering.’

Wright also revealed that his mother Nesta also abused him by saying she ‘wished she had had him terminated’.

Wright said. ‘It was a terrible experience for me for years, dealing with that; knowing that the person you love the most and want love from most has those feelings.

‘Whether she meant what she said or not, nobody should ever have to hear that.’

Despite the abuse, Wright says he has supported his mother and stepfather and has recently made peace with his mother – who is now in her 90s.

Wright has previously spoken about his troubled childhood. In 2018 he spoke to Players’ Tribune about the difficulties he faced in his young life. 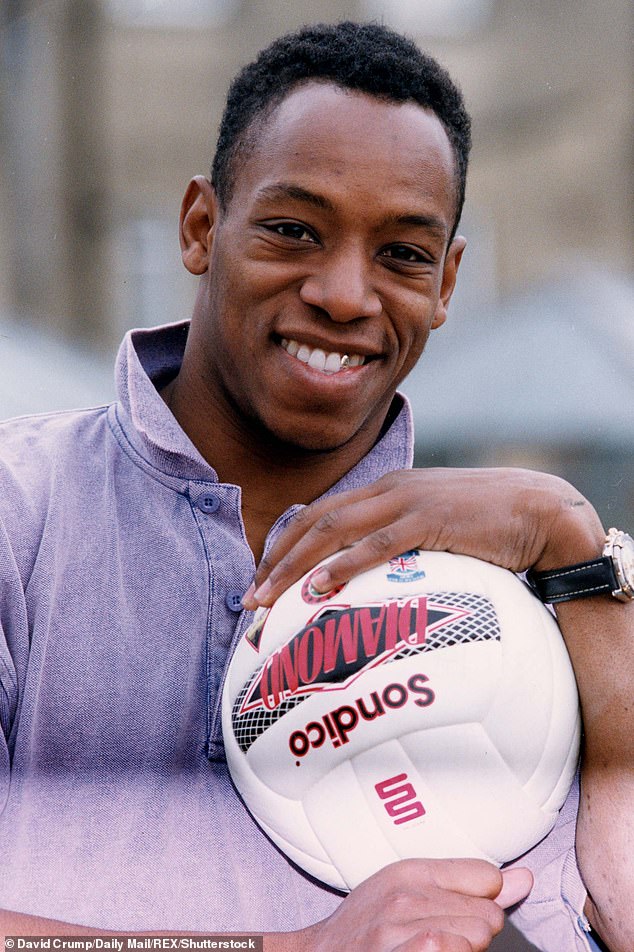 In the new BBC documentary, set to air on May 6, Wright (pictured as a young footballer) returns to his old family home in Brockley, south London 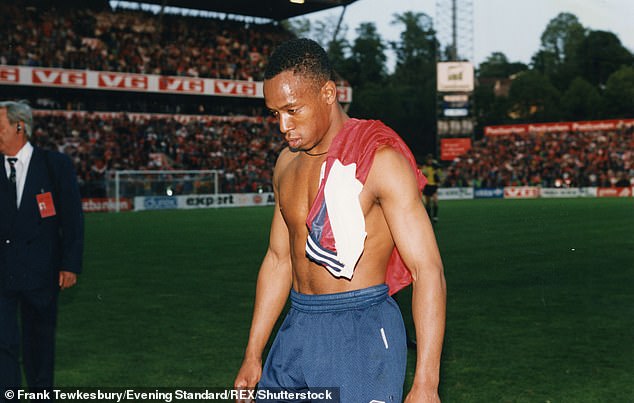 Wright (pictured in 1993) had a spell in prison – for non-payment of parking fines – before being signed by Crystal Palace and later Arsenal. He would go on to score more than 200 top-flight goals, while winning 33 England and scoring nine goals for the national side

He said: ‘I know a lot of people think of me as some happy-go-lucky guy.

‘For a large part of my life, I was angry. I was always angry.

‘That house wasn’t a good place for me, which is probably why I would stay outside kicking a tennis ball against a brick wall for hours on end.

Speaking about his step-father, he said: ‘He was a weed-smoking, gambling, coming-home-late, gambling-his-wages, womanising kind of guy.

‘He was rough with my mum and rough with all of us kids. And I don’t know why, but he didn’t like me in particular.

‘One of the few things my brother and I looked forward to in the house was Match of the Day, and my stepdad used to take that away from us – just because he could.’

In that 2018, Wright fondly recalled primary school teacher Sydney Pigden, who taught him to read and write and made him register and milk monitor, plus Tony Davis and Harold Palmer, who ran local football team Ten-Em-Bee.

He said: ‘They used to come to my house to pick me up and drive me directly to training. I didn’t realise it at the time, but they were doing all they could to help me avoid getting in trouble with the police.

‘And then I blew it anyway and ended up in prison when I was 19.’

Wright spent two weeks in Chelmsford Prison in 1982 for non payment of driving fines and, having already been rejected by Brighton, quit football to become a labourer. 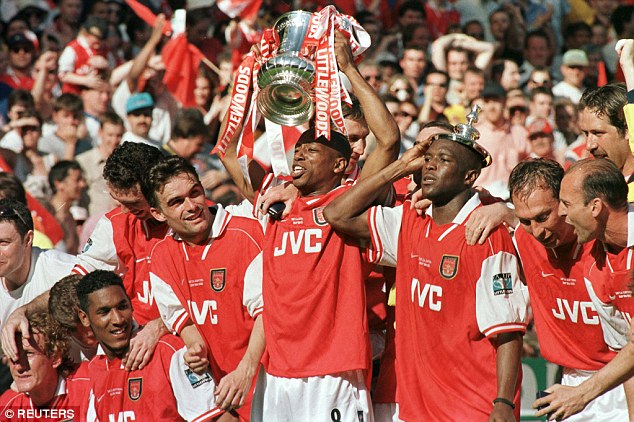 Wright, pictured lifting the FA Cup in 1998, went on to have huge success with Arsenal 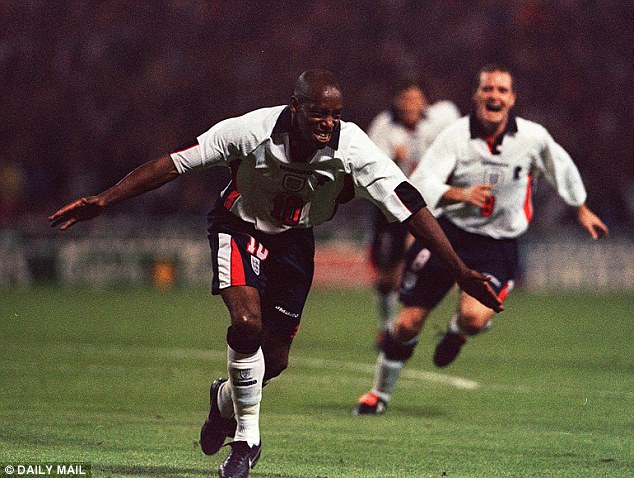 He adopted the son of his then girlfriend Sharon, Shaun Wright-Phillips – who would go on to play for Manchester City and Chelsea.

Wright signed semi-professional terms with Greenwich Borough while still providing for his family as a plasterer.

He later signed for Crystal Palace after impressing then manager Steve Coppell in a trial.

‘It was only a three-month trial but I’d done it: I was able to call myself a professional footballer,’ Wright said.

‘Nearly 11 years of rejection, bullying, prison and all sorts of nonsense, and I had finally gotten my dream.’

Ian Wright: Home Truths will air at 9pm on May 6 on BBC One.

Previewing the show, a spokesperson for the BBC said: ‘Ian Wright investigates the effect growing up in a psychologically abusive and violent home has on children in the UK.

‘As well as coming to terms with his own experience, Ian sets out to understand the impact this kind of childhood can have on kids growing up now and on the adults they will become.

‘After returning to his childhood home for the first time in 50 years to revisit his past, Ian decides to travel across the UK to meet with other people who have experienced domestic abuse in their childhood, as well as to meet professionals to talk through his own trauma.

‘Ian discovers how things have changed since he grew up in the 1970s, and finds out how children are supported in the UK today by visiting his former primary school, and observing local and charity-led initiatives.’