Flags flew at half-staff at the Brooklyn Police Department in Illinois on Wednesday following the death of a police officer who authorities say was trying to stop a driver from eluding capture.

Officer Brian Pierce Jr., 24, was struck and killed around 3 a.m. Wednesday, allegedly by a suspect who was driving a Dodge Challenger. Pierce was on a bridge, putting down stop sticks meant to deflate the tires of the suspect’s vehicle, according to FOX 2 of nearby St Louis.

Police launched a manhunt for the suspect after the Challenger was found near the bridge, according to reports.

“He was born with a passion to be a police officer,” Tammy Pierce told the St. Louis Post-Dispatch. “His favorite thing about police work was just being out in the public and stopping crime. He was all about that.”

Pierce had recently moved to Carbondale, Illinois, and would make the 100-mile drive every evening to work the nightshift in Brooklyn, his mother said.

The suspect allegedly fled from a nightclub but police didn’t say why the driver was initially wanted. 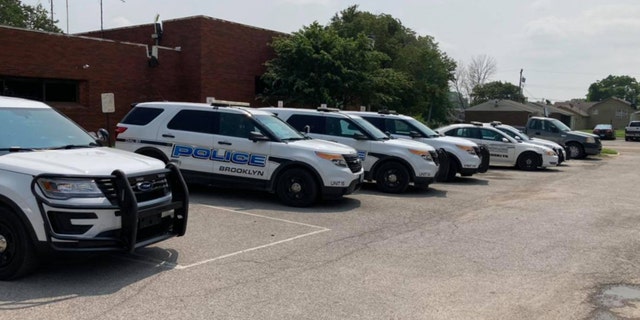 The Brooklyn Police Department in Illinois.

The police station in Brooklyn was draped in a black bunting, FOX 2 reported.

“Very tough time to lose a co-worker of this magnitude because of his heart to the community,” Capt. Antonio White told the station. “He loved being a police officer. This was one of his dreams as a child to become a patrolman.”

“He’d come to work early because this is what he loved to do,” White told the Post-Dispatch. “He’d have your back 100%.”

Pierce had been with the department for nine months and had previously served in the Spillertown Police Department near Carbondale. He also served with the Makanda Fire Department.

About an hour after the crash, another car reportedly drove through the roadblock on the bridge. Officer fired at the driver, who crashed into two police cars and was arrested along with three passengers. The driver was shot and suffered non-life-threatening injuries, the Post-Dispatch reported.