In largest ever increase, US homicides surge during pandemic

Washington: Homicides in the US in 2020 increased nearly 30 per cent over the previous year, the largest one-year jump since the FBI began keeping records, according to new figures released by the agency.

Homicides and non-negligent manslaughters climbed an estimated 29.4 per cent to 21,570, an increase of 4901 over 2019, FBI data showed. It is the highest estimated total since the early 1990s, when homicides stayed above 23,000 a year as drug wars played out in many places in the US. 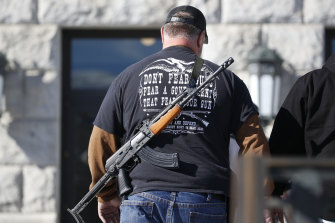 A man carries a weapon during a second amendment gun rally in Salt Lake City in February 2020.Credit:AP

Homicides continued to rise in 2021, according to a midyear report released by the nation’s largest police agencies, although the rate of increase has slowed. The 18-month increase in homicides has broadly mirrored the COVID-19 pandemic.

Violent crimes in 2020 meanwhile rose by a more moderate 5.6 per cent over the previous year while property crimes continued a nearly two-decade decline, falling 7.8 per cent. Robbery and rape dropped 9.3 per cent and 12 per cent respectively.

James Alan Fox, a criminologist at Northeastern University in Boston, said he considered 2020 a “unique situation” and not part of any sort of long-term trend. He attributed the dramatic uptick to a confluence of factors, including the coronavirus pandemic, conflicts over politics and race and people just generally having too much free time.

“Last year was unique in many ways,” Fox told USA Today. “Because of the pandemic, people were not in structured activities: Kids were not in school and adults were not at work. The whole country was divided by politics, the response to the coronavirus and the social justice movement.”

Those anxious conditions, Fox said, were accompanied by a surge in gun sales.

“Eventually, those guns get used in the heat of anger,” he said.

“I don’t want to minimise what’s happened. I just don’t want people to believe that the sky is falling and that this is a permanent” trend, Fox added. Even with the huge homicide rise, he noted, the number is still far lower than what the country endured during the crack cocaine epidemic 30 years ago.

“What is striking, in addition to the sheer increase in homicide, is how widespread it was in 2020,” Rosenfeld said.

While the drops in other crime categories are positive news, homicides were the stunning trend — one that has continued this year. A number of communities, rural and metropolitan, have experienced continued increases in homicides. The rising violence has become a political battleground in the year after protests over policing erupted in the aftermath of George Floyd’s death in Minneapolis. Several candidates with law enforcement backgrounds are running or plan to run for various offices around the country.

Gun control groups noted that firearms were the primary driver of the violence.

“This jump in murders is just the latest proof that we are experiencing a gun violence epidemic within the COVID pandemic,” John Feinblatt, president of Everytown for Gun Safety, said in a statement. “This death spiral will continue until we stem the flow of illegal guns and invest in proven intervention programs.”

The Uniform Crime Report program is run by the FBI and collects data annually from law enforcement agencies in a number of categories, among them violent crimes, rape, robbery and aggravated assault as well as property crimes. The data is estimated because not all agencies submit information. The FBI said about 85 per cent of the 18,619 law enforcement agencies eligible submitted data in 2020. As a result, the FBI cautions against using its report to rank cities.

US President Joe Biden has focused on gun violence in his anti-crime policy, urging greater cooperation among local and federal leaders.

Biden, who has pledged to push for sweeping changes to firearms laws, in June unveiled measures to stem the flow of firearms used in crimes, building on executive orders signed in April that include a push by the Justice Department to better control self-assembled “ghost guns”.