The first Test match may not have gone to plan but India’s diehard cricket supporters are expecting their heroes to bounce back at the MCG on Saturday for the start of the Boxing Day Test.

In most years, the MCG would be nearing its 100,000 capacity for the Australian cricket calendar’s marquee event but this year only 30,000 people will be allowed in due to COVID-19 restrictions. 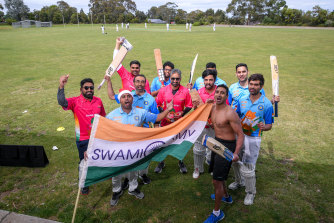 The Swami Army Indian cricket supporters prepare for the Boxing Day Test with a match of their own. Credit:Eddie Jim.

Perfect conditions are expected for the first day’s play, with Melbourne heading for a top of 27 degrees as fans settle into their seats on Boxing Day.

Among them will be the Swami Army, a local Indian supporter group which has not been deterred by the pandemic, border closures or a batting collapse in the Adelaide Test that yielded the team’s lowest ever score of 36.

“It was quite embarrassing,” said Melbourne-based Swami Army member Raj Bhatia, who was there to witness the carnage. “But you can't take anything away from the bowling line-up, those deliveries … what can you do?”

As evidence of his passion for the team, Mr Bhatia hasn’t missed a single day of an Indian Test on Australian soil since 1999. He estimated that he’s also seen more than 90 per cent of one-day and T20 games as well. 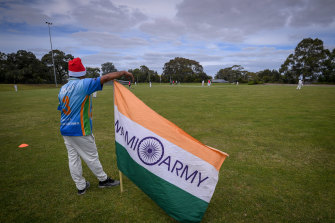 Rakesh Jampala watches on as the Swami Army tunes up with a Christmas Day cricket match.Credit:Eddie Jim

The third and fourth Tests are due to be played in Sydney and Brisbane. Cricket Australia has yet to confirm whether the SCG Test will go ahead due to the complications of restricted travel to Queensland from NSW because of the recent coronavirus cluster on Sydney's northern beaches.

If it does happen, Mr Bhatia will have to make a tough decision about whether to go to Sydney for the match and risk being forced into hotel quarantine when he returns to Victoria. 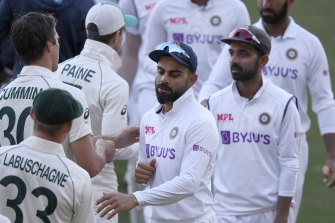 India will be without captain Virat Kohli when they try to make up for their eight-wicket defeat inside three days in the first Test.Credit:David Mariuz

Despite captain Virat Kohli flying back to India to be at the birth of his first child, Mr Bhatia said the touring team can recapture some of the form that took them to a historic series win in 2019.

“Their willpower to prove the pundits wrong has been visible,” he says. “I've got full faith that India will definitely come back. We can't forget [number three] Cheteshwar Pujara, if he's on he'll bat for three days.”

The only exception statewide to the sun-drenched weather on Boxing Day will be in Gippsland, where there is expected to be some cloud cover in the morning.

“It doesn't look like there would be too much to negatively influence the game – it should be a nice warm one,” said Bureau of Meteorology senior forecaster Chris Arvier. 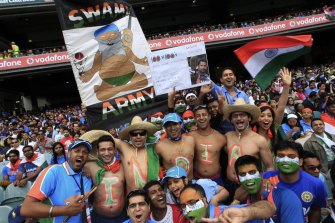 The Swami Army in their element.Credit:Paul Rovere

“The only thing is the UV index is looking extreme, it's a reminder to cover up throughout the day. It's a bit of a taste of summer over the weekend which we've been missing for the last week or so.”

Sunday is expected to be even hotter again with a forecast high of 31 degrees – although some showers are predicted when a cool change arrives later in the day.

Mr Arvier said there was “quite a lot on the menu” for Sunday, which would follow a warm evening on Saturday night.

“There’s a severe fire danger in the north west of the state, Melbourne is likely to be quite windy with some pretty strong guests at times,” he said.

After that, Mr Arvier said pretty stable conditions were expected for the final three days of the Boxing Day Test.