Iowa has declared critical race theory “discriminatory indoctrination,” and a ban on it is set to take effect in just over a week – but leaked documents show that a large area education agency meant to support special needs students was workshopping how it might implement the controversial program even as lawmakers were finalizing the prohibition.

Iowa’s nine area education agencies are tasked with advising public schools and some private schools that primarily focus on special education services, which take up about 80% of their budget, according to the AEAs’ website.

They also provide support for the broader population of students, mental health services and resources for teachers.

Iowa’s ban on critical race theory was signed into law by Republican Gov. Kim Reynolds on June 8 and goes into effect July 1.

“This is indoctrination not education,” Reynolds said of CRT. “And it’s exactly why I took action to ban teaching divisive concepts and critical race theory in Iowa schools. Kids need to be taught how to think and not what to think.” 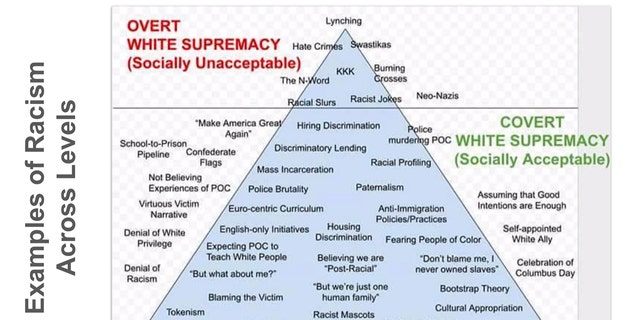 The idea that Americans can pull themselves up by the “bootstraps” and improve their lives was also listed there – as was the concept of colorblindness and “denial of White privilege.”

“’Make America Great Again’ is a belief that all Americans and Iowans can fulfill the American dream,” said state Sen. Jake Chapman, the president of the Iowa Senate, who backed the CRT ban. “Sadly we have segments of our educational institutions who are indoctrinating students.”

He called critical race theory “a step backwards” and pointed to former President Donald Trump’s economic successes to dispute the idea that the campaign slogan belonged on the slide.

“President Trump did far more for minority populations than any other president,” he said. “This AEA has conveniently neglected these indisputable facts and instead are peddling far-left extremist views.”

Another slide shows that organizers had expected to issue an “anti-racism” statement on behalf of the MBAEA by late spring. A draft of the statement was hidden Tuesday, and it was not immediately clear whether it would even be released following the CRT ban. 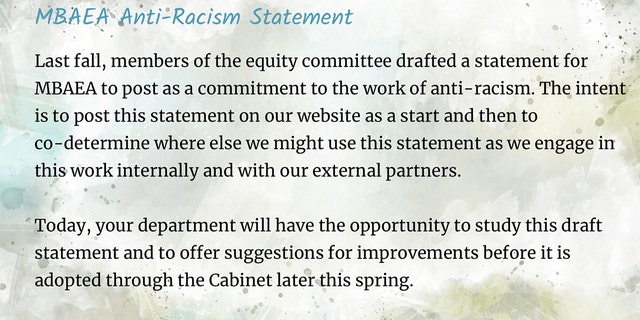 Critics have likened such statements to McCarthy-era loyalty oaths that unfairly add a political litmus test to employment and hiring practices.

Minutes after Fox News asked the agency for comment on the documents, the owners revoked public access. The MBAEA did not respond to the initial request for comment or a follow-up asking why the documents had been hidden.

At least 142 MBAEA workers attended the seminars, according to an attendance sheet obtained by Fox News. Most of them were listed as speech language pathologists and social workers.

Fox News reached out to dozens of people on the list but did not immediately receive comment.

The agency was holding these workshops in a deeply conservative state where there is widespread opposition to critical race theory programming.

Three of the state’s four House seats, including Hinson’s, are controlled by Republicans, as are both of its Senate seats.

“We absolutely should not be indoctrinating our children to judge one another by the color of one’s skin, gender, or sexual identity, and I’m glad Gov. Reynolds has taken action to prevent that.” Sen. Joni Ernst told Fox News Tuesday night.

Both houses of the state Legislature are also GOP controlled, paving the way for the critical race theory ban, which declared CRT “discriminatory indoctrination” and blocks state and local governments from ordering employees or students to attend training sessions.

“Examples like this are exactly why House Republicans took action and prohibited these divisive concepts from being taught in Iowa schools,” said Iowa House Speaker Pat Grassley. “We heard from countless parents with these concerns of political indoctrination in their child’s school.”