Iran now claims its military “unintentionally” shot down a Ukrainian jetliner this week, killing all 176 people aboard.

The announcement, which cited “human error” for the strike, came Saturday via Iranian state television and referred to a statement from the military, according to The Associated Press.

He also wrote, "The Islamic Republic of Iran deeply regrets this disastrous mistake," but made no mention of the U.S. in either message.

Iran had previously denied involvement in the crash, contrary to claims from the U.S. and Canada that pointed to Iran. 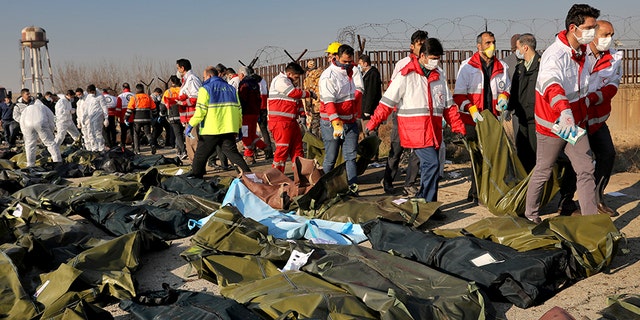 All 176 passengers and crew on board a Ukrainian jetliner died in a crash in Tehran, officials said. (Associated Press)

The crash of the Boeing 737, which was operated by Ukrainian International Airlines, happened during takeoff from Tehran’s airport just hours after Iran fired missiles at two air bases were U.S. troops had been stationed – but no U.S. casualties were reported.

The plane, which was bound for Kiev, the Ukrainian capital, had 167 passengers and nine crew members aboard. Those killed included 82 Iranians, 57 Canadians and 11 Ukrainians, officials said.

The number of Canadians was revised from a previously reported figure of 63.

Iranians who’ve emigrated to Canada frequently travel back and forth between the two countries, the Globe and Mail of Canada reported. Kiev is a frequent stopping point because no direct flights operate between Canada and Iran, according to the paper.

On Friday, Canada's foreign minister had announced the launch of an international effort to press Iran for a thorough investigation into the cause of the crash.

The U.S. had promised “appropriate action” would be taken following its determination that the aircraft was downed by an Iranian missile.

Prime Minister Justin Trudeau said Thursday that intelligence sources indicate the plane was shot down by an Iranian missile.

This is a developing story. Check back for updates. The Associated Press contributed to this story.