Italy braces for widespread closures of schools, restaurants and shops

Italy is expected to announce today that schools, restaurants and shops will close across much of the country as a third wave of Covid infections takes hold.

Prime Minister Mario Draghi is due to hold a cabinet meeting this morning to decide on the exact measures, before an announcement in the afternoon.

It comes almost exactly a year after Italy became the world’s first country to enact a nationwide lockdown to stem the spread of the virus.

A majority of European countries are now seeing Covid cases start to rise as new and more-infectious variant of the disease begin to spread.

With the continent’s vaccine drive in disarray and just seven per cent its population given at least one dose, leaders are being forced to turn once again to lockdowns to bring the virus under control. 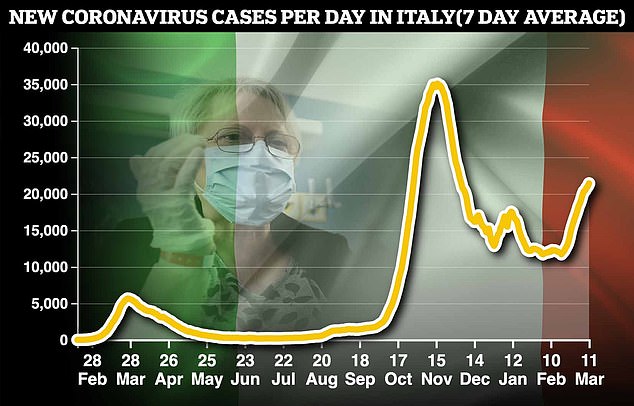 Italy has seen Covid infections rise sharply in recent days, with ministers set to announce a new ‘red zone’ strategy that is expected to close schools, restaurants and bars 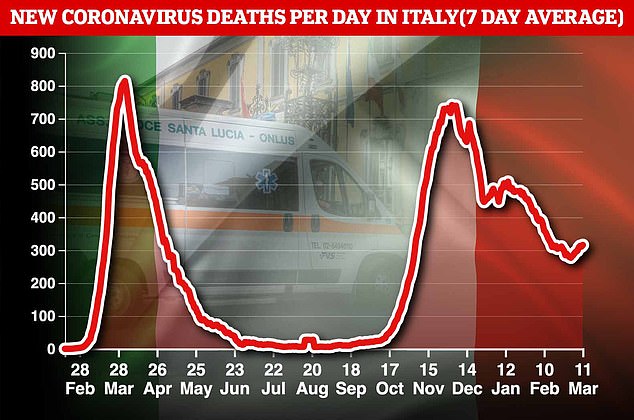 Deaths have also begun rising as Covid cases soar, with European leaders warning that the continent’s third wave has begun

Italy on Thursday recorded 25,649 new cases of coronavirus and another 373 death were attributed to the disease.

That makes it one of the worst-hit countries in Europe, narrowly behind France – with the continent’s highest daily case total on 27,166 – and Russia – with the worst one-day death toll at 459.

Italy has reported more than 3.5million cases of Covid since the start of the pandemic, and more than 100,000 deaths.

Repeated lockdowns have triggered one of its worst recessions since the Second World War, with GDP thought to have shrunk by almost 10 per cent last year.

Italy’s more populated northern regions such as Lombardy, which includes Milan, will reportedly join several others in being classified as the highest risk ‘red zones’ from Monday, as will Calabria in the south.

Lazio, the region that includes Rome, could also join them, although the situation is uncertain.

Draghi’s new national unity government tightened restrictions for red zones earlier this month, to include not just the closure of bars, restaurants, shops and high schools but also primary schools. Residents are told to stay home where possible.

Other regions including Tuscany and Liguria are expected to pass into the medium-risk orange zone, with all shops, museums, bars and restaurants closed.

That leaves only Sicily in the lower category of yellow, and Sardinia in the new category of white, with hardly any restrictions at all.

The GIMBE health think tank on Thursday warned of an increase in the number of new cases for three consecutive weeks, which ‘confirms the start of the third wave’ of Covid-19.

GIMBE president Nino Cartabellotta said that in more than half of Italy’s 20 regions, ‘hospitals and above all intensive care units are already overloaded’, with ordinary health services suspended.

Italy began its coronavirus vaccination campaign in late December but as elsewhere in Europe, it has been dogged by delays in deliveries of the jabs.

Concerns over reported side effects of the AstraZeneca/Oxford vaccine prompted the health regulator on Thursday to suspend a batch of the jabs, even while it warned there was no evidence of a link with blood clots.

It comes just days after Italy blocked a batch of the vaccines from going to Australia, saying they were needed to help speed up its own drive. 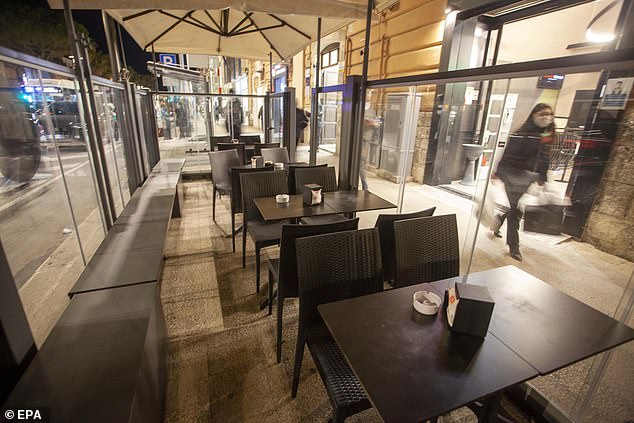 Italy is expected to announce the widespread closure of bars, restaurants and schools today as Covid cases rise and its vaccination programme stalls (file image, closed restaurant in Bari)

Italy has vaccinated just seven per cent of its population so far, in line with the European average but well behind the likes of the UK, which has jabbed 33 per cent.

Italy is also vaccinating people at a slower rate than the UK, jabbing just 0.28 people out of every hundred per day, compared to 0.52 people per hundred in Britain.

German officials have resorted to threatening those who refuse the vaccine in order to increase uptake, while health authorities in France have also waged a PR offensive – insisting the vaccine is safe and effective.

Despite that, a host of nations – including the likes of Denmark, Norway and Iceland – have halted used of the AstraZeneca jab while investigations are carried out.

European leaders continue to insist that all adults will have been vaccinated by September this year, but at the current rate a large portion of the adult population will remain wunvaccinated well into next year.

Meanwhile UK Prime Minister Boris Johnson has pledged that every UK adult will have been offered a vaccine by June 31, meaning all lockdown measures will be lifted on June 21 – provided infections don’t soar again.