“The germs have come back” was how Mandi Davidson told her daughter, Zoe, that her fifth birthday party on Sunday had to be cancelled.

Zoe was holding up well, according to Mrs Davidson. “She told her friends the government said she couldn’t have her party.” Mrs Davidson, however, was “devastated”.

Like many other people across Victoria, this is the second year in a row that COVID-19 restrictions have acted as party pooper for Zoe’s big day. “I feel awful for her,” Mrs Davidson said. 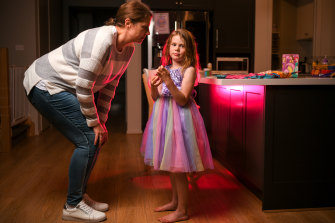 Mandi Davidson with daughter Zoe, 4, who will miss out on a birthday party for the second year.Credit:Eddie Jim

“Zoe’s been counting down the days for weeks. She had her birthday invitation list going since before Christmas.”

The original venue — their Sunshine West home — was ruled out earlier this week by restrictions on visitors to five people, and so they were going to invite 30 relatives and friends to a park.

Mrs Davidson had booked a visit from an actor dressed as Belle from Beauty and the Beast to do face painting and play games.

Zoe was going to wear a dazzling new sequined top and multi-coloured skirt. “We had about 15 kids coming, and their parents,” Mrs Davidson said.

But on Thursday, Acting Premier James Merlino banned any gathering, until 11.59pm on June 3.

“This time around, life has gone back to normal and the last-minute disappointment, I think, will be much harder to take.”

Two children from South Morang — Mackenzie Young, about to turn 11, and her brother Matthew, almost 8, were to have a joint birthday party this weekend but it’s been cancelled for the second year. “It’s just not fair,” Mackenzie told her mum, Sarah Young.

Mrs Young had acted swiftly after the earlier ruling that only five people were allowed at home, by booking 30 people into the local Bridge Inn Hotel. But with the lockdown announced on Thursday, even that option is out.

“You just feel crap,” Mrs Young said. “As a parent, you just want to help them and change everything, and you can’t.”

Last year, friends and relatives drove past the Young house honking horns, and dropped presents at their door.

Mackenzie and Matthew were then allowed to order a take-away meal of their choice to eat at home, followed by a Zoom “happy birthday” session.

Mrs Young said it would be similar this year, although they might hold a party in future. “It’s so uncertain. Like, do I book someone next weekend? What if I do, and they get all excited and they’re shattered again?”

Australian Psychological Society president Tamara Cavenett said missing a birthday party two years in a row could be “huge” for kids, and parents should talk to them to find out “what they’re saying to themselves”.

“Give them some language around why this is happening, and also some good news about the fact that it won’t be forever,” Ms Cavenett said.