Acting Premier James Merlino has questioned whether the federal government’s $3 billion Victorian infrastructure announcement is “real”, as Victoria crosses its fingers for Commonwealth cash for vaccines and a quarantine hub in Tuesday’s federal budget.

The Commonwealth announced on Monday an intention to help build a freight terminal designed to remove thousands of trucks from Melbourne’s roads. Mr Merlino said the announcement was not fully-fledged because it was not budgeted for it in the Commonwealth budget’s forward estimates – the four-year funding period that locks in spending. 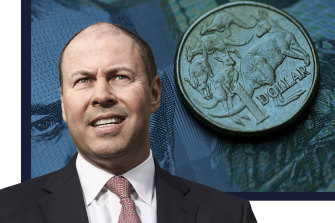 Treasurer Josh Frydenberg will hand down the budget on Tuesday.Credit:

“It’s not real unless the funding is in the forward estimates. We’re looking for real funding from the federal government,” he said.

State Labor this week attacked the federal government for what it claims is $7 billion worth of federal infrastructure announcements that never materialised. The Commonwealth argues it can only spend on promised projects when state governments deliver on the roads, bridges and railways that the federal government wants to help fund.

The federal government has already pledged $5 billion to the Melbourne Airport Rail Link and $2 billion for a fast rail line to Geelong, with Treasurer Josh Frydenberg expected to make further infrastructure commitments for his home state when he hands down his third budget on Tuesday.

The Victorian government wants to see cash for its quarantine hub and mRNA vaccine proposals in Tuesday night’s federal budget, Acting Premier James Merlino has declared. It is also hoping for a large investment in mental health services to complement Victorian reforms stemming from the state’s royal commission into the sector.

Mr Merlino also said Victoria would seek Commonwealth support for major infrastructure projects including the Suburban Rail Loop, though these spends are unlikely to feature in this year’s federal budget.

“There’s a range of things we’ve put to the federal government and like most people we’ll be watching the budget closely,” he said.

“We absolutely we want to see those partnerships [on infrastructure projects].

“It’s all about creating jobs.”

Over the next 11 years, the Andrews government will build five tunnels in Melbourne, including some of the state’s most expensive road and rail projects – the 90-kilometre Suburban Rail Loop to connect suburbs around Melbourne without the need to travel into the CBD, the $16 billion North East Link and the $13.7 billion Metro Tunnel.

The federal government has proposed two potential sites for the freight intermodal – Truganina in the city’s west and Beveridge, about 40 kilometres north of Melbourne. The Victorian government’s preference is a site in the western suburbs.

Mr Merlino also announced a $167.3 million creative industries package on Tuesday. The government hopes the Creative State fund will “underpin the creation” of 20,000 jobs. The announcement comes a day after a $191 million screen industry package that the government says will create 40,000 jobs.

The Creative State funding will consist of $6.3 million to continue the redevelopment of the Geelong Arts Centre’s 500- and 250-capacity theatres set to be completed in 2023. About $80 million will support other cultural institutions hard-hit by pandemic-induced restrictions.

“Victoria is the cultural capital of our nation and this very special announcement is about securing and creating jobs and reasserting our position as the creative state,” Mr Merlino said.