Ivanka Trump’s ‘best friend’ claims she was a brat in high school who said she didn’t want to read books ‘about poor people’, questioned how ‘teachers could afford BMWs’ and blamed others to get herself out of trouble

A woman who claims to be Ivanka Trump’s former ‘best friend’ has penned a scathing article for Vanity Fair in which she describes the First Daughter’s bratty behavior in high school, including blaming others to get herself out of trouble and making snobby remarks in private.

Lysandra Ohstrohm, a 38-year-old journalist who writes for The Observer and Huffington Post, attended Chapin, an all-girls private school on the Upper East Side, with Ivanka as a teenager. She also stood in her 2009 wedding to Jared Kushner as one of two ‘maids of honor’.

She says the pair were close until immediately after the wedding and that their friendship fractured because Ivanka did not take enough interest in her new job.

Since then, she says, the pair have had a distant but polite friendship. She says has watched for years while Ivanka defended her father.

Now Lysandra, who voted for Biden in the recent election, is speaking out, saying it is time to lift the veil on who her former friend really is.

She alleges, among other things, that Ivanka was charming and precocious as a teenager which won over adults and made them think she’d shaken off her father’s crassness but was, in private, just as obsessed with money and struggled to hide it.

According to Lysandra, Ivanka responded: ‘Why would you tell me to read a book about f*****g poor people?’ after she recommended a novel about a diner manager.

Lysandra Ohstrohm, a 38-year-old journalist who writes for Vanity Fair and The Observer, attended Chapin, an all-girls private school on the Upper East Side. They are pictured together in 2007

She also allegedly said ‘Since when can a teacher afford a BMW?’ and ‘Why is a police officer living in a house like that?’ while the pair were watching movies, claiming they would not be able to afford them in real life.

Lysandra says that Ivanka also coaxed other girls into bad behavior, including flashing their breasts at ‘the hot dog man’ from the windows of their school, then talked her way out of trouble when they were caught.

‘One of the earliest memories I have of Ivanka from before we were friends is when she blamed a fart on a classmate.

‘Some time later, she goaded me and a few other girls into flashing our breasts out the window of our classroom in what has since been labelled the “flashing the hot dog man” incident in Chapin lore.

‘Ivanka had basically been the ringleader, but she pleaded her innocence to the headmistress and got off scot-free. The rest of us were suspended,’ she said.

She also claims to have spent time with the President, who asked her if Ivanka was the ‘prettiest’ girl in their grade and, she claims, was stunned when she said she wasn’t.

‘Before I learned that the Trumps have no sense of humor about themselves, I remember answering honestly that she was probably in the top five.

“Who’s prettier than Ivanka?” I recall him asking once with genuine confusion, before correctly naming the two girls I’d had in mind. 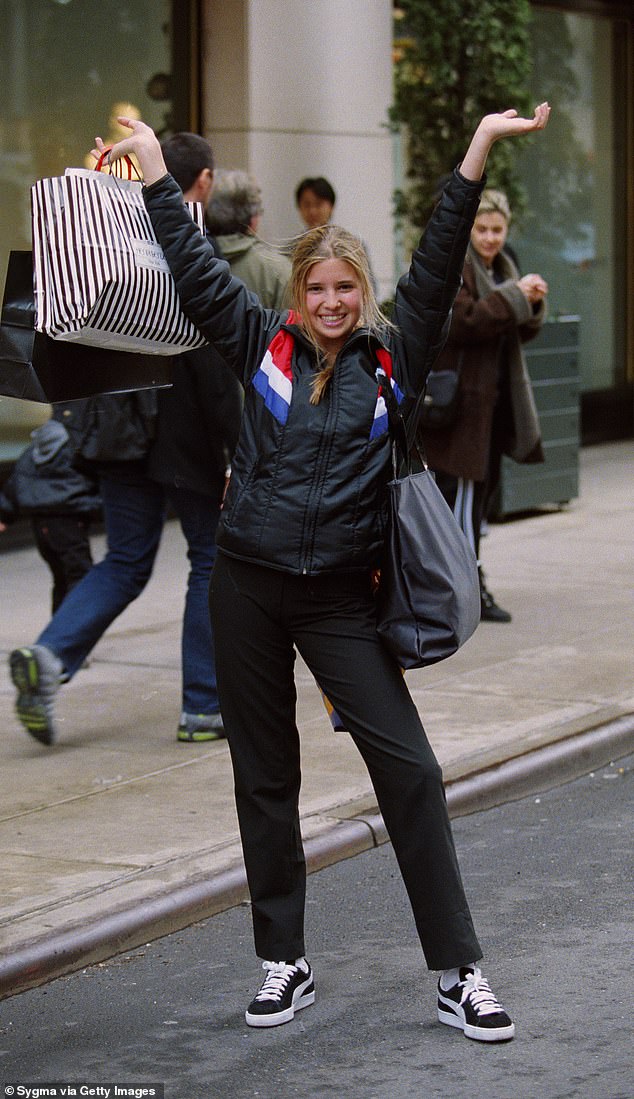 Lysandra described how they would use President Trump’s credit card to go shopping in Manhattan. Ivanka was publicly charming but in private, was a brat, she says. She is pictured aged 15 in 1996

Ivanka, Lysandra (left) and Chistina Floyd (right) in 2002. Lysandra says they stopped being friends in 2009

Despite them no longer being close, Ivanka still follows Lysandra on Instagram

‘He described one as a young Cindy Crawford while the other he said had a great figure,’ she wrote.

She also describes an incident at Mar-a-Lago during which Donald Trump Jr. snatched half of a grilled cheese sandwich from her plate.

Lysandra says she and Ivanka stopped talking the day after Ivanka’s wedding to Jared Kushner in 2009, in which she was a bridesmaid

‘Ivanka scolded him, but Mr. Trump chimed in, “Don’t worry. She doesn’t need it. He’s doing her a favor.”

Lysandra also said that Ivanka told her she ‘hated’ a necklace she wore with her name in Arabic, and once said to her: ‘How does your Jewish boyfriend feel when you are having sex and that necklace hits him the face?

‘How can you wear that thing? It just screams, “terrorist.”‘

Lysandra claims that Jared and Ivanka tried to set her up on dates with people in their social circle, and that despite her unkind words, Ivanka is generous.

Their friendship ended the day after Ivanka and Jared’s wedding, she says, when she complained that Ivanka had taken no interest in her new job, and Ivanka said something to her ‘like’ ‘Ly, I’m too busy for this s**t.’

A spokeswoman for Ivanka did not immediately respond with a comment in response to Lysandra’s claims on Tuesday morning.

Lysandra’s comments are of the same nature as those of  Stephanie Winston Wolkoff, a woman who claims to be the First Lady’s former best friend.

She shared unflattering recordings of Melania cursing before the election.

Melania responded by saying she was a hanger-on who she hadn’t been able to get rid of.