Two days after a FedEx Field railing collapsed, sending metal and fans tumbling to the ground at his feet, Jalen Hurts wants answers.

The Philadelphia Eagles quarterback sent a letter addressed to the Washington Football Team and the NFL on Tuesday calling for action to ensure that a similar scenario doesn't play out again.

"I am writing to inquire about what follow-up action is being considered in response to the near-tragic incident that took place at FedEx Field on January 2, 2022," Hurts wrote. "As you are aware, many individuals, including fans, media personnel, and myself, were placed in a dangerous situation when portions of the FedEx Field tunnel collapsed. Although I was able to prevent the barrier from crashing onto me, that was not the same for others who could be suffering from lingering injuries."

He asks both parties what preventative measures they plan to take moving forward.

"Through the initial shock, my first reaction was to assist those involved. However, while I displayed a calm composure, I understand the severity of what happened and am extremely concerned for the well-being of the fans and media. As a result, I would like to know what safeguards the NFL and the Washington Football Team are implementing to prevent this from ever occurring in the future."

The incident occurred after Philadelphia's 20-16 win as Hurts walked to the tunnel to the visiting locker room. Eagles fans eager to congratulate Hurts leaned against a metal barrier and fell to the ground next to Hurts after the railing collapsed.

#Eagles QB Jalen Hurts was sacked only once during today’s game. Almost had a second on his way to the locker room. pic.twitter.com/WwBE5pXaxO

This view is crazy… I would've stayed on the ground until my lawyer arrived… 🤕💰
pic.twitter.com/cVU0yPmG3z

Multiple fans claim they were injured in the fall

Most of the fans got up from the fall and surrounded Hurts, who was happy to interact and take selfies with his admirers. Hurts helped one fan who landed at his feet off the ground. Four fans told ESPN and the Philadelphia Inquirer on Monday that they experienced injuries during the fall ranging from a cervical strain and head injury to bruises on their legs. A photo runner for the Associated Press named Mark Tenally was also injured and received treatment from onsite medical staff, according to AP.

The Washington Football Team released a statement on Sunday that everyone who fell was offered medical attention.

"To our knowledge, everyone involved was offered onsite medical evaluation and left the stadium of their own accord," the statement reads. "We're very glad no one appears to have been seriously injured. The safety of our fans and guests is of the utmost importance and we are looking into what occurred."

ESPN also reported that: "Prince George's County EMS personnel were on the scene within five minutes and began treating those who needed medical attention." 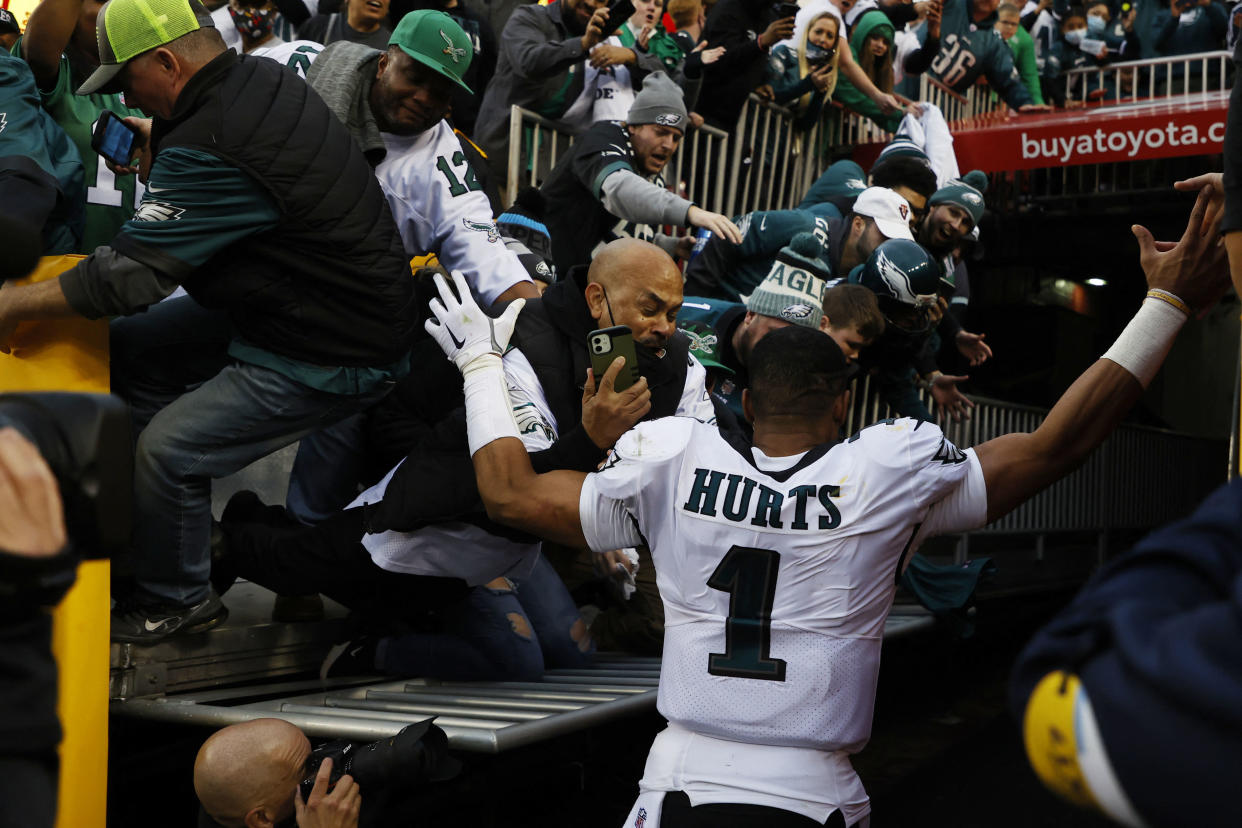 The team issued a statement on Monday claiming that the section that collapsed was designated for wheelchair access under the Americans with Disabilities Act and that the railing was attached to a wheelchair ramp instead of anchored in concrete and not intended to be load-bearing.

Another fan claiming injury named Mike Naimoli told ESPN that security directed fans to the section and that there was no signage indicating that it was restricted.

"The security guard at the bottom, we [asked] him, 'Can we go over there?' And he was like, 'Yeah,'" Naimoli said. "If Washington Football Team wants to come out and say that the area is restricted, there was no documentation of that at all.

"The one security guard that was right in front of that area swept us in there and was like, 'OK, go ahead over to the tunnel.'"

"We are reviewing the matter with the club to understand what happened and to ensure it does not happen again," the statement read.