Jinping and Albanese shared a joke. Beware the punchline

“Diplomacy,” says an old adage, “is the art of saying ‘Nice doggie!’ till you can find a rock.” It’s a useful metaphor for capturing this week’s performances by China, the US and Australia at the G20 in Bali.

China first. After years of insults, rants and sanctions from Beijing, the change in its tone with Australia was dramatic. Anthony Albanese and Xi Jinping even shared a joke about Australian politics. 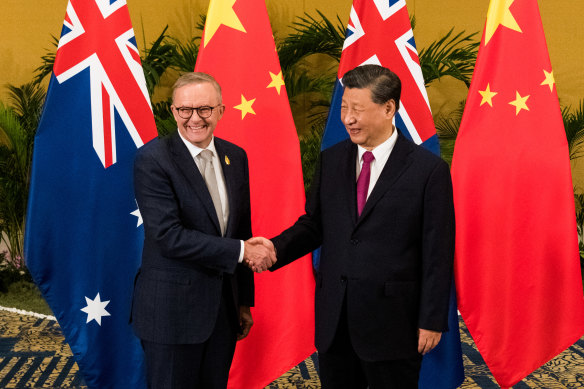 In the first formal, top-level meeting between the two countries in six years, Xi recalled his last leisurely visit to Australia, when he was still China’s vice-president. He spoke of the fact that he’d sat up till midnight dining and talking with Kevin Rudd in The Lodge. Xi told Albanese, in words to this effect: Then I travelled to Darwin, and by the time I got there, Kevin Rudd was no longer prime minister. Julia Gillard had conducted her lightning coup.

Albanese replied that Xi could be reassured: By the time you get to your next destination, President Xi, I’ll still be prime minister of Australia.

Even after the translator had finished relaying the gag, there was a long moment before the Chinese delegation absorbed that it was a joke, though one with a point. When they did, they all laughed, the communists enjoying the joke about the crazy antics of these madcap democrats.

For three years Xi’s government had put Australia in the political “deep freeze”, ignoring every letter, phone call and request for meetings. Now it was Beijing that had initiated this meeting in Bali. 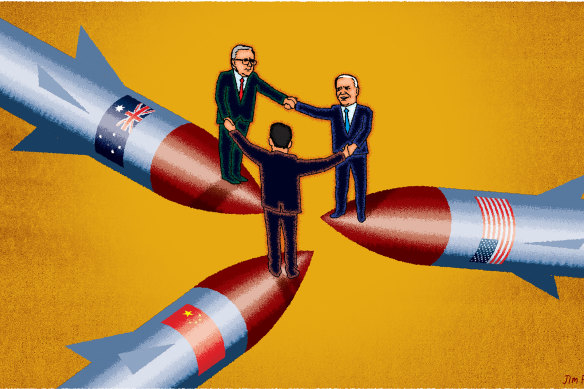 For more than three years his government lectured Australia’s “Cold War mentality” and “anti-China” policy. Now the president spoke warmly of his past visits to every state in Australia, of how China and Australia should “cherish” their history of good relations, of the 50th anniversary of diplomatic relations next month.

For years, Xi’s propaganda outlets vilified Australia, likening it to “chewing gum stuck to the bottom of China’s shoe”, said it was part of a “white supremacist axis”, and published a confected photo of an Australian soldier slitting the throat of an Afghan child.

Now the Chinese leader reminisced about meeting the Australian prime minister whose government first recognised Beijing, Gough Whitlam, to which Albanese rejoined he’d been “a big man with big ideas” and that Australia would mark the anniversary on December 21.

And for two years Beijing imposed political boycotts on more than $20 billion worth of Australian exports while publishing a list of 14 demands on Australian sovereignty. Now, Xi listened, unprotesting, as Albanese said he expected progress on the trade bans. And, strikingly, while Albanese ran through a list of Australian concerns about China’s policies, the Chinese side cited no grievances and made no demands.

He also stressed the importance of the South China Sea as an international shipping and aviation thoroughfare. This was the unbowed Australian stance which the senior White House official, Joe Biden’s Indopacific co-ordinator Kurt Campbell, described as “purposeful, strong diplomacy”.

Xi did not respond with a list of his own grievances, which would have been perfectly standard for such a meeting. Instead of frustrations, he offered sly flattery. Xi said he appreciated Albanese saying that China-Australia relations “will be handled in a mature way”, implicitly rating Albanese as more mature than the Morrison government. “I attach great importance to your opinion,” concluded Xi in his opening. “Thank you.”

Australia had made no concessions to any Chinese demand. Albanese did, however, give Xi two essential assurances. One, he offered to continue to “talk to each other, calmly and directly”, a tacit assurance that he wouldn’t resume the bellicose public rhetoric that the Morrison government sometimes blurted out.

And Albanese reiterated Australia’s support for the continuation of the status quo across the Taiwan Strait, the reddest of the Chinese Communist Party’s red lines.

So Beijing tried to break Australia’s sovereign will. It failed. In fact, it backfired. The Chinese campaign merely hardened Australian sentiment and policy against Xi and his regime.

So the problem is solved? Only superficially, and only for now.

While Australia is resuming friendly contacts with Beijing, it is not halting its military modernisation or its economic diversification. In Bali this week, Albanese held separate discussions with US President Joe Biden and British Prime Minister Rishi Sunak on progressing the AUKUS plan for nuclear-powered submarines and other defence tech. 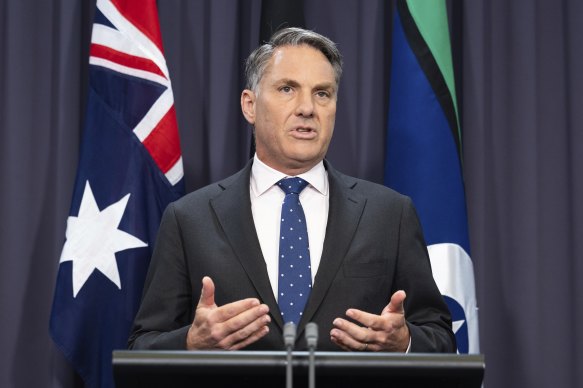 Australia’s Defence Minister, Richard Marles, said this week that the Defence Strategic Update that he commissioned would tell Australia what it needs to do to manage in “a world where post-Cold War optimism has been replaced by the reality of renewed major-power competition”. In the Indo-Pacific, this was “driving the biggest military build-up we have seen anywhere in the world over the last 70 years”.

“Nice doggie!” says Australia, as it reaches for a rock. At the same time, Albanese hastens towards new trade agreements with the EU and India as Australia seeks to diversify away from China: “Democratic nations need to engage with each other,” he said this week. Trade is not mere business, it’s also strategy.

Albanese and Foreign Affairs Minister Penny Wong like to describe the aim of Australian China policy as “stabilisation”. Which is sensible. But it can only work if it’s mutual. And China will be happy to stabilise with Australia, just as it is with the US and other powers, until it’s ready for the “great struggle” ahead.

Precisely a week before Xi wore a Western business suit to host Albanese in Bali, he put on his military combat fatigues to visit China’s Joint Operations Command Centre. He addressed the officers in the cavernous centre. 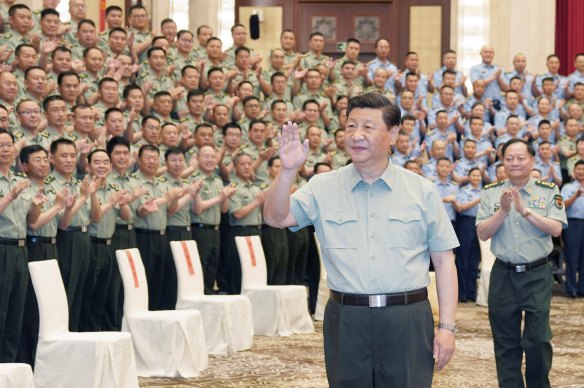 “Xi Jinping emphasised that at present, the world is undergoing profound changes unseen in a century that are accelerating its evolution, increasing instability and uncertainty in our country’s security situation, and the task of the military struggle is heavy and arduous,” reported the party-owned Central China TV.

“He emphasised that the entire army must focus all its energy on fighting wars, focus all work on fighting, speed up the improvement of its ability to win, and effectively fulfil the mission and tasks of our army in the new era.” Guided by his view that “the West is declining and the East is rising”, Xi’s aim is to make China the world’s leading power by 2049.

China’s military modernisation proceeds. Consider its navy alone: “Between 2017 and 2019, China reportedly built more vessels than India, Japan, Australia, France, and the UK combined,” summarises the Centre for Strategic and International Studies, a Washington think tank. “Germany’s Vice-Admiral Kay-Achim Schonbach noted in 2021 that China’s navy is expanding by roughly the equivalent of the entire French navy every four years.”

As Xi tells his officers: “The task of building a powerful navy has never been as urgent as it is today.” 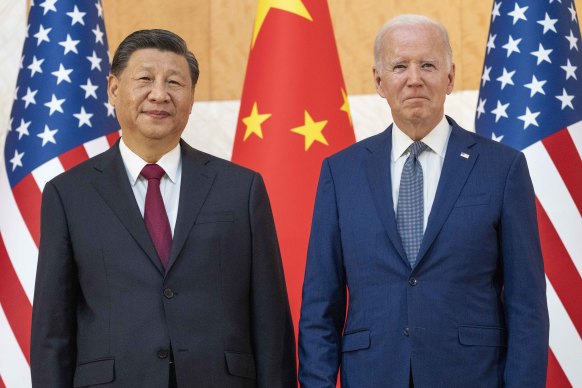 US President Joe Biden with Chinese President Xi Jinping at the G20 summit.Credit:AP

In Xi’s summit this week with Joe Biden, the two governments agreed to reopen some channels of contact. But Beijing refused to open security dialogues with Washington. On nuclear weapons specifically, China is expanding its arsenal. Unlike Russia, China never has agreed to any negotiation with Washington on the topic.

As China mollifies the US and Australia and others – “Nice doggie!” – it, too, is reaching for a rock.

Xi’s three-hour summit session with Biden this week was a mutual “Nice doggie!” moment. Or, as Kurt Campbell put it to me: “Relations have steadied somewhat after the Bali meeting. I don’t believe the fundamental character of the relationship has been altered – competition continues to be the watchword. But I do believe that we have successfully taken the initial steps to build a floor under the relationship … a calming period.”

Or, as Kevin Rudd put it in The Atlantic this week, neither side believes it has “a decisive upper hand” and “both sides believe they need more time”.

As for the US, owners of the biggest military rocks, it has intensified the competition with China dramatically in the past month. The Biden administration has banned the sale of the most advanced computer microchips, and the gear to make them, from export to China.

This has been described as “economic war” and the latest in economic decoupling. It will retard China’s efforts to take world leadership in AI, 5G and quantum computing, all central to future warfighting.

As China tries to scale the highest ladders of tech, “the US has cut the rungs away”, in the words of Mark Williams and Zichun Huang of Capital Economics. Or, perhaps, complicated China’s access to the biggest rocks. For now. Nice doggie!

The Opinion newsletter is a weekly wrap of views that will challenge, champion and inform your own. Sign up here.

More from our award-winning columnists

An anxious nation: Mortgage stress, COVID burnout, extreme weather and the cost of living crisis – no wonder Australia’s status as the “lifestyle superpower of the world” is under threat – Nick Bryant

The future of democracy: Australia must learn from America’s descent into extreme inequality, which has led to deep discontent. It must also do more to civilise “social” media – the great amplifier of hate – Peter Hartcher

Behind the interview: Shane Warne may have been the greatest bowler legendary interviewer and cricket lover Michael Parkinson has ever seen, but he’s not his favourite interview – Peter FitzSimons