Biden spoke Monday night just minutes after Trump left Walter Reed medical facility to reenter the White House – taking off his own mask to be photographed and then reentering the White House.

Biden, speaking at an NBC town hall in Florida, said he was not worried about himself having contracted the coronavirus from Trump, who debated him on the same stage in Cleveland on Tuesday, when the president may have already been infected with COVID-19. 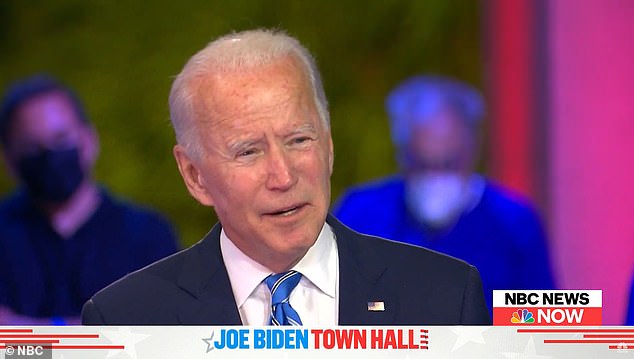 Former Vice President Joe Biden blasted the ‘macho’ refusal to wear masks just minutes after President Trump staged a photo-op and returned to the White House from the hospital and then removed his own mask.

He told NBC’s Lester Holt he wasn’t worried about his own safety. ‘I’ve been fastidious about the social distancing.’

But he did take to task the president’s family. Ivanka Trump, Donald Trump Jr., Eric Trump, and Lara Trump all took off their masks inside the debate hall.

‘It was a little disconcerting to look out and see that his whole section no one had masks on,’ he said.

‘You could see people coming in and a lot of people didn’t have masks on,’ Biden explained – but did not identify Trump’s family members by name specifically. 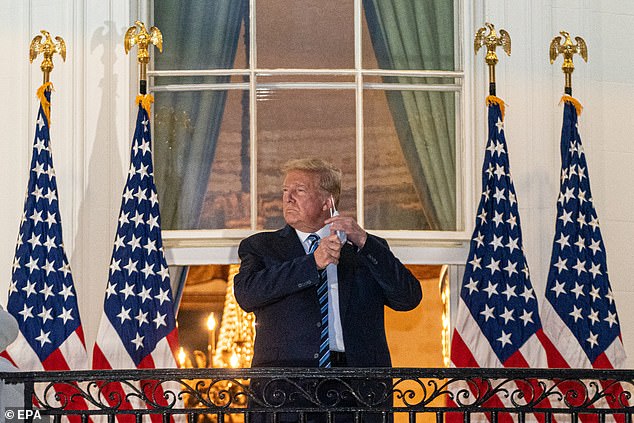 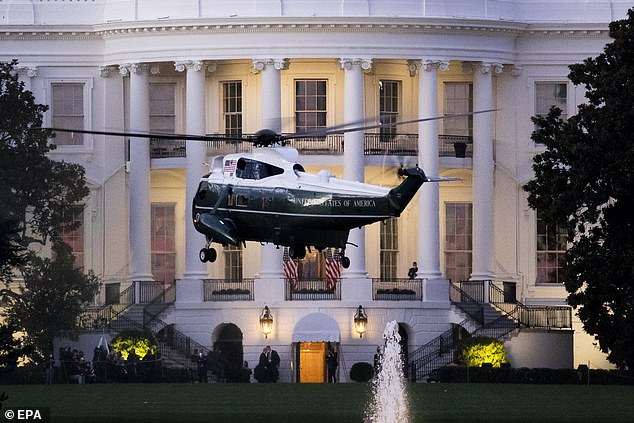 epaselect epa08723070 Marine One arrives at the South Lawn of the White House, carrying US President Donald J. Trump as he returns from Walter Reed hospital, in Washington, DC, USA, 05 October 2020. Trump was discharged from Walter Reed National Medical Center where he had receiving treatment after announcing he had tested positive for COVID-19 on 02 October. EPA/MICHAEL REYNOLDS

It was revealed Wednesday that members of the Cleveland Clinic, who cosponsored it, offered the Trump family members masks inside the event venue but they declined.

With Trump revealing early Friday that he tested positive for COVID-19, he may well have been exposed during the debate.

Later during the town hall, Biden teed off on people who don’t wear them. ‘Now what is this macho thing I’m not going to wear a mask,’ he said.

Biden was on stage for the town hall format just days before he is scheduled to debate Trump October 15th in Miami for the second presidential debate – which will feature a similar format.

It was arranged in an outdoor venue that featured occasional traffic noise, and the candidate couldn’t always hear his masked questioners.

He told a voter he’s ‘not putting up with it’ if Trump goes after him again. She said she was concerned the president bullied him.

Monday’s event took place outdoors with undecided voters.  Biden was seated in a chair feet away from host Lester Holt.

He called last week’s debate ’embarrassing for the nation.

Biden said he himself ‘would communicate the right lesson to the American people’ and said emphatically that ‘masks matter.’

But he declined to go after Trump’s medical team for holding back information.

He said that ‘moment to moment I’m not sure that that is an absolute requirement’ to reveal all information about the president’s health. He said it had national security implications.

After blasting Trump on a variety of issues during the pandemic, Biden said: ‘I’m not being critical of the fact that every single detail was not released.’

That came despite a media pile-on for White House physician Sean Conley’s  refusal to divulge critical information about the president’s condition, including the state of his lungs and precise levels of oxygenation while he battles the coronavirus.