Treasurer Josh Frydenberg’s Teflon-like abilities to sail unscathed through a hazardous political environment were on show again on Monday. Amid a white-hot political environment and a string of investigations under way in Parliament House into allegations of sexual assault and harassment, more than a few federal MPs have chosen to put their heads down, maintain a low profile and cancel engagements.

But not the Treasurer. He cut a conspicuous sight walking the halls of Parliament with several of his classmates from Mount Scopus Memorial College class of ’88. The tour included a stop by the political press gallery and both chambers before the Treasurer dropped the guests off for lunch. Sadly, the member for Kooyong couldn’t stay.

It’s worth noting that Frydenberg has made a show at various points of his career of promoting his high-powered friendships. Recall the bromance spectacle at his maiden budget in 2019 when media scion Ryan Stokes, Sydney pub tsar Justin Hemmes and Aussie Home Loans executive James Symond so dazzled the public gallery that attendees found it hard to concentrate on the budget itself. But things were more low-key on Monday with Frydenberg’s high-flying but low-profile schoolmatese. Mount Scopus in Melbourne’s east has a storied list of past students including late, legendary tour promoter Michael Gudinski, publisher Louise Adler and retail magnate Solomon Lew. 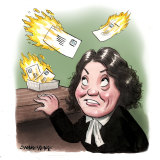 While Four Corners journalist Louise Milligan has been rebuffing offers from members of the public to pay her legal fees, pointing out that the ABC indemnifies her, for barrister Sue Chrysanthou, SC, who is representing Attorney-General Christian Porter in his defamation case against the ABC and Milligan for reporting rape allegations, it is a very different story.

Apart from the usual vile Twitter abuse, Chrysanthou has been receiving hate mail via email for taking on Porter’s case. Not even her status as an inner-city leftie has inoculated her from the case.

Speaking of Giles, the solicitor has been accused of being a sham lawyer by online trolls who found out that she was not registered to practise in NSW. That is true, but Giles is registered in Victoria and it is a nationwide system.

Under the “cab-rank” system, Chrysanthou is ethically required to accept a brief in her area if she has time to undertake the work.

Chrysanthou wouldn’t comment to CBD, but would no doubt be delighted to see that Crikey has managed to inflate her daily fee by about 40 per cent to $12,000 a day.

So far this month the Victorian Bar has been dealing with crises relating to lawyers wearing shorts and thongs during online legal hearings and a shock divorce from the Law Society of Australia. Yep, it’s March madness folks.

But now there’s a fight over the ability of the Bar to regulate itself.

Last week Victorian Bar Council president Christopher Blanden, QC, wrote to members in his weekly email telling them to ditch online legal hearings and get back to court. “Shorts and thongs under the desk are convenient, but it’s not who we are and it’s not what we do.”

Shorts and thongs under the desk is certainly not what a great many barristers do, particularly those who happen to be women.

Last week barristers were stunned to receive a missive from the Law Council of Australia telling them they “may have read or been informed” that the Victorian Bar intended to withdraw from the Council.

Talk about breaking news! Barristers had no idea.

“This is a more complicated issue with a long history,” Blanden told members on Friday, before promising a special update next week, which seemed a glacial pace unlikely to satisfy many impatient briefs.

Who is guarding the guards?

Now the Victorian Bar is at odds with the Victorian Legal Services Commission over a key recommendation from the royal commission into police informants and Nicola Gobbo.

The royal commission recommended that the VLSC should within 12 months revoke the “instrument of delegation” it had conferred on the Bar to handle complaints regarding barristers.

This Recommendation 88 was dynamite for the Bar. The Bar Council immediately said it supported the recommendations and would work with the VLSC to implement them.

So Legal Commissioner Fiona McLeay wrote to Blanden on December 14 to tell him that she was revoking the complaints delegation. Blanden wrote back to the Commissioner on December 22 saying he was astonished by this unilateral move and would protest it.

Yesterday the Bar declined to comment. Barristers are left none the wiser as to the status quo.

A spokesman for the VLSC said it was “committed to the implementation of all of the recommendations” of the royal commission “as they relate to regulation of the legal profession, in accordance with the time frames set out in the report”.

“We are working closely with the Victorian government and relevant stakeholders to achieve this.”

Good to hear, commissioner. But are those stakeholders as keen to work closely with you?