The Archbishop of Canterbury has ‘joyfully’ welcomed proposals to bless same-sex married couples but said he will not personally conduct them due to his ‘pastoral responsibility for the whole communion’.

Justin Welby spoke as the Church of England issued a formal apology for its historic rejection and exclusion of LGBTQI+ people.

Divisive plans to allow such blessings for the first time were outlined earlier this week, but the position on gay marriage will not change and same-sex couples will still be unable to marry at church.

Mr Welby said while he is ‘extremely joyfully celebratory’ of the proposals, he will not offer them in his role as the highest-ranking religious leader of a church which has varying views on the subject.

He told a press conference at Lambeth Palace Library: ‘Because of my pastoral care and responsibility of being a focus of unity for the whole communion I will, while being extremely joyfully celebratory of these new resources, I will not personally use them in order not to compromise that pastoral care.’

Mr Welby also spoke of a parish priest he had known in the past who was gay.

He said: ‘The next thing I heard was that the pressure of living with the church’s attitude had led to his suicide.’ 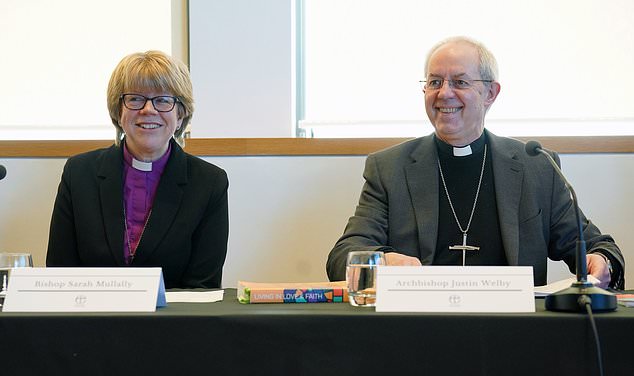 The Bishop of London Sarah Mullally and Archbishop of Canterbury, Justin Welby address a press conference on Friday (Jonathan Brady/PA)

Mr Welby wished the priest could be ‘here today because I think he would be able to feel that, perhaps it wasn’t everything he wanted, but it said that he wasn’t a lesser’.

He added: ‘I’m really pleased that we’ve done what we’ve done and I just wish that certain people could be here today and know about it.’

The blessings have been welcomed by some as progress on what is a divisive issue but others have said they do not go far enough.

Archbishop of York Stephen Cottrell, believes the change ‘puts the Church of England in a better place’ and confirmed he will offer blessings.

But he added: ‘I completely support and understand Archbishop Justin’s position.’

Bishop of London Dame Sarah Mullally described the blessings move as a ‘significant change’ but acknowledged it will be voluntary for clergy to decide whether they want to perform them.

She likened it to the situation with the marriage of people who have been divorced.

Asked if she will give blessings, she said: ‘For me, I take very few marriages because I’m a bishop, therefore the sense in which I will be in a situation where I will be asked for that? I don’t know.’

Mr Welby had made ‘a sacrificial step’ in his decision not to use the new blessings which was ‘clearly the right one for him’, she said.

The bishop also added that she hoped couples who approached churches that were not offering the prayers ‘would be generously welcomed and actually helped along the way to find the church nearest and that could offer it’.

She also said she understands that some same-sex relationships which are blessed under the proposed new prayers, will be sexual, when asked if gay Christians who are in a civil marriage are still expected by the church to remain celibate.

‘I think one thing I have learned through listening is that there are a whole range of ways in which people will express that relationship and some will be sexual, some will not, some will be friendship,’ she added.

The Bishop of Oxford, the most senior bishop in the Church of England to have called for a change in doctrine to allow gay marriage, said there is ‘further to go’.

Dr Steven Croft said: ‘It is very good for us to be able to say today that the church can now offer public services of blessing, but we know that we have further to go.’

Veteran campaigner Peter Tatchell described the offer of a blessing only as ‘an insult’ and dismissed the church’s apology for its treatment of LGBTQI+ people as ‘worthless’ without any progress on allowing gay marriage. 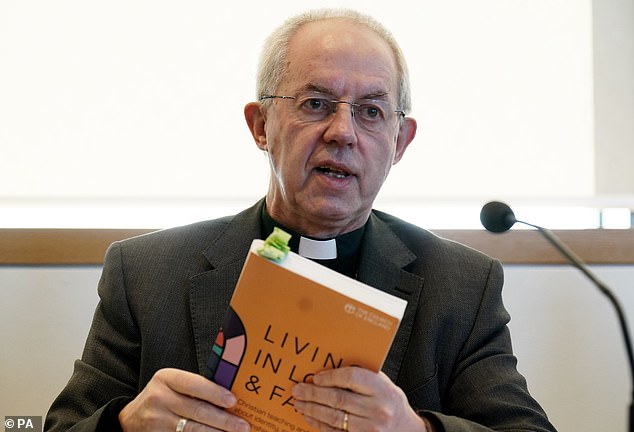 The pastoral letter penned by Bishops of the Church and published on Friday, stated: ‘We want to apologise for the ways in which the Church of England has treated LGBTQI+ people – both those who worship in our churches and those who do not.

‘For the times we have rejected or excluded you, and those you love, we are deeply sorry.

‘The occasions on which you have received a hostile and homophobic response in our churches are shameful and for this we repent.

‘As we have listened, we have been told time and time again how we have failed LGBTQI+ people.

‘We have not loved you as God loves you, and that is profoundly wrong.

‘We affirm, publicly and unequivocally, that LGBTQI+ people are welcome and valued: we are all children of God.’

The Church of England’s General Synod, sometimes known as the church’s parliament, will be asked to discuss the blessings proposals in detail during its meeting from February 6 to 9, with the main debate set for February 8.