Kate Middleton and Meghan Markle have been mocked as ‘Princess Kkkaren’ and ‘Queen Sparkle’ on posters at a Labour conference fringe event attended by Jeremy Corbyn.

Anti-monarchy posters featured on the walls of a stall at The World Transformed, a Left-wing political festival taking place near the Labour Party’s annual conference in Liverpool, Mail+ reports.

As well as referring to the notorious white supremacist group, one of the posters also labelled Kate a ‘Karen’ – the slang term used to insult women perceived as obnoxious and entitled.

Another poster, showing a mock front page of The Observer, depicts King Charles III with photoshopped ears under the caption ‘Not My King’.

The former Labour leader, 73, was pictured walking alongside the wall filled at the fringe event earlier today, which was also attended by senior party figures.

It comes days after he said the plan for party members to sing God Save The King at the conference in Liverpool was ‘very, very odd’.

Mr Corbyn had suggested singing the anthem was ‘excessively nationalist’ after current leader Keir Starmer and party bosses took the decision for God Save the King to be sung at the conference for the first time in its history following the death of the Queen. 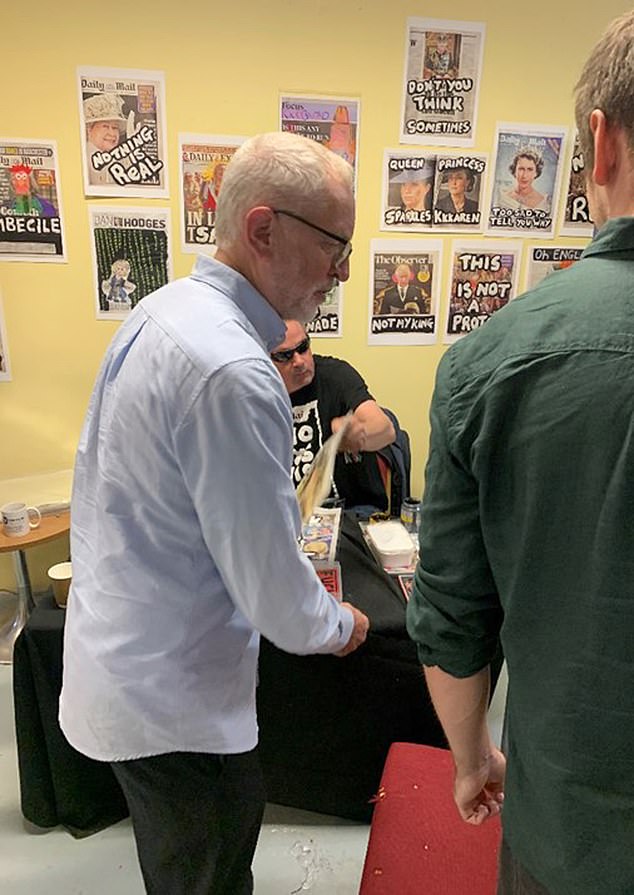 The former Labour leader, 73, was pictured walking alongside a wall filled with anti-monarchy posters at the fringe event earlier today 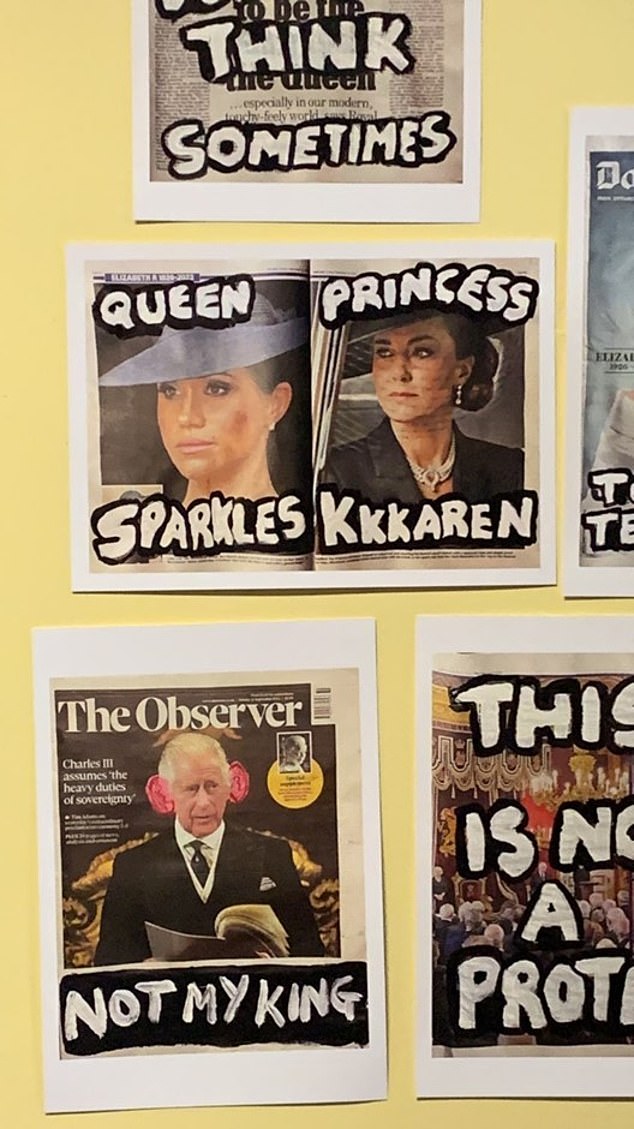 As well as referring to the notorious white supremacist group, the headline also labelled Kate a ‘Karen’ – the slang term used to insult women perceived as obnoxious and entitled

The posters were being sold by performance artist and public protester ‘Artist Taxi Driver’, who had set up next to a stand for the Peace and Justice Project, which is headed by former Labour leader Jeremy Corbyn.

Mr Corbyn remains a party member but sits in the Commons as an Independent MP.

Pages from the Daily Mail and other newspapers produced as part of the coverage of Her Majesty’s funeral were drawn over to take aim at King Charles and the Princess of Wales.

Other altered pages saw the mourning for the late Queen Elizabeth II being mocked with a headline reading: ‘Too sad to tell you why.’

Witnesses suggested that Mr Corbyn briefly stopped by the posters, which were on sale for £10 each.

Conservative Party chairman Jake Berry said: ‘Despite the highly publicised singing of the national anthem, once again the mask slips when it comes to the Labour Party and its supporters.

‘It’s a disgrace that these repugnant posters are tolerated on the fringes of Labour’s conference and it beggars belief that Labour supporters are entertaining this vile stuff just weeks after the death of her late Majesty.’

Sources close to Mr Corbyn said the newspapers were not part of the Peace and Justice Project stand.

Mr Corbyn was also seen playing a version of the arcade game Doom, which lets you take on former Prime Minister Margaret Thatcher.

The game’s developer, who debuted the project at the festival, said Mr Corbyn ‘liked the game’.

Other Labour figures to attend the festival include Mayor of Greater Manchester Andy Burnham and several Labour MPs from the Left-wing of Labour, though it is not clear whether they have seen the exhibition.