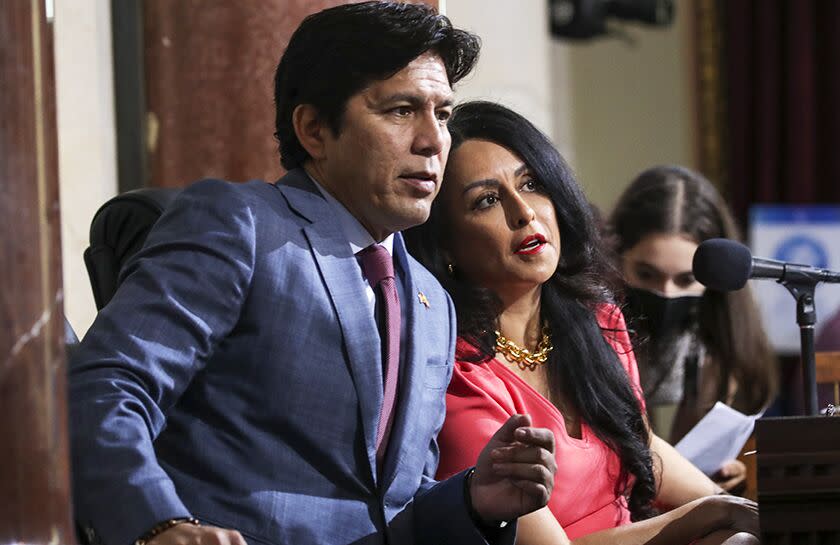 Information obtained by Los Angeles police from search warrants served on Twitter and Reddit has led detectives to additional investigative avenues as they work to uncover who recorded a meeting between three L.A. City Council members and a labor leader that was filled with racist and offensive comments, according to court documents and sources.

The LAPD's Major Crimes Division focused at first on the identity and Internet Protocol addresses behind a Reddit accountthat posted the audio last year and a Twitter account that tipped off reporters and others to the existence of the recordings, according to a search warrant issued in October and obtained by The Times.

The warrant, according to law enforcement sources familiar with the investigation, is one of as many as half a dozen filed by detectives tasked with unmasking who is behind the recordings that plunged City Hall into protests over the racist remarks and provided a window into the backroom machinations of the city's redistricting process.

The initial warrant served on Twitter led investigators to a second Twitter user, according to two sources not authorized to discuss the investigation. The sources said detectives are continuing to pursue subscriber information for additional IP addresses, which are unique numerical sequences that can identify specific devices.

The investigators appear to be closer to confirming the identity of those behind the recordings, the sources told The Times.

While the online publication of the illegally made audio files is not a crime, detectives are seeking information about those behind the posts as a means of eventually reaching the party or parties that made the tapes.

Recording conversations without a person’s consent is illegal in California, with rare exceptions. The search warrant states that LAPD investigators believe that the recordings, made in October 2021 at the L.A. County Federation of Labor headquarters in Westlake, are a felony violation of the state eavesdropping law.

The warrant was issued Oct. 26, a day after LAPD Chief Michel Moore announced a criminal investigation into the leak. The probe was launched after three people heard on the tape filed reports saying they were recorded without their consent or knowledge, according to the warrant. Moore has said the investigation was requested by Nury Martinez, who was City Council president at the time the recording was made; then-Councilmember Gil Cedillo; and Ron Herrera, who was president of the L.A. County Federation of Labor. A spokesperson for Councilmember Kevin de León has said he did not report a crime or request an investigation.

The racist language revealed in the recordings led to the resignations of Martinez and Herrera, cast a shadow over Cedillo's last months on the City Council and led toongoing calls for De León to step down.

According to documents obtained by The Times, LAPD Det. Mark Seston, who specializes in criminal conspiracy investigations, served the warrant on Twitter and Reddit on Oct. 28 and received "all requested" data and account information on Dec. 5. He asked for a 90-day delay in notifying the account holders that they were subject to the search.

Seston sought the IP addresses behind the accounts, along with billing addresses, credit card information, linked social media accounts, personal websites and phone numbers used for text verification. The detective also requested the IP addresses of the computers or devices logging into those accounts, which could lead to their owners.

To seek a warrant, the detective had to show Los Angeles County Superior Court Judge Teresa Sullivan that there was probable cause that a felony was committed in the making of the secret recordings.

Under California law, all parties must consent to a conversation being recorded. Violations can be prosecuted as a felony or a misdemeanor, but warrants can be obtained only for felony offenses. The law carries a three-year statute of limitations, so recordings from 2021 could be considered a crime.

Seston said in the warrant that the information from the two social media accounts has "a high probability of containing evidence that would assist in identifying the owner(s) … and further identify the suspect(s) responsible for posting the private conversations.

"I believe this information would assist with revealing further avenues of investigation related to the felony crime of eavesdropping," Seston wrote.

Days after receiving the information from Twitter and Reddit, Seston filed another warrant that remains under seal, according to court records.

In the months since the initial warrant was filed, the investigation has focused heavily on those connected to the Federation of Labor and the conference room where the discussion took place, according to two sources familiar with the probe who spoke with The Times on the condition of anonymity. LAPD detectives believe that a conference-call device in the room may have been compromised to capture the conversation and produce the recordings, the sources said.

After the audio clips were posted on Reddit, the Federation of Labor tried to block the Los Angeles Times from publishing the details, saying the recordings were obtained illegally. The Times refused, leading to widespread publication of the materials that ignited protests at City Hall.

Martinez and the other Latino leaders present at the meeting have said they were unaware they were being recorded. During their conversation, Martinez said that Councilmember Mike Bonin, who is white, handled his young Black son as though he were an “accessory” and described the boy as “changuito,” or “monkey.”

The leaked recordings were met with universal condemnation, with leaders from President Biden on down calling for the resignation of the three council members. In the aftermath, Martinez resigned. Cedillo's term ended Dec. 12, but De León has refused to quit despite mounting pressure.

Detectives believe the audio made public via Reddit may be a portion of a much larger set of recordings made at the Federation of Labor offices without consent. The release to the public may have been spurred by a power struggle within the federation, according to a source with detailed knowledge of the LAPD investigation.

California Atty. Gen. Rob Bonta is conducting a broader investigation into the Los Angeles redistricting process that took place last fall, saying an inquiry is needed to “restore confidence” in the makeup of the city’s 15 council districts. That process was underway when Martinez, Cedillo and De León were recorded discussing redistricting.