Letting the young go back to normal while shielding the elderly would have ‘dire consequences’ on the NHS, SAGE warns

Allowing the young to go back to normal while shielding the elderly would have ‘dire consequences’ for the NHS, SAGE has warned.

In leaked documents – handed to ministers last week – the advisory panel suggested allowing them to pack out bars and night clubs was ‘not viable’ because it would trigger an enormous burden of hospitalisations, deaths and knock-on non-Covid-19 fatalities in all age groups.

They said it would not be possible to prevent contact between age groups, with even ‘small leaks’ in infections leading to ‘many illnesses’.

The top epidemiologists also dismissed calls for the UK to follow a herd immunity strategy, warning an ‘unconstrained epidemic’ in the young would seriously impact health services.

They pointed to the fact a quarter of all hospitalisations in the first wave were under 60, and that ‘shielding strategies’ in care homes had still resulted in more than 20,000 deaths, to back up their arguments.

But scientists remained divided on the issue, with almost 11,000 medical and public health academic backing the Barrington Declaration that calls on ministers to dodge lockdown restrictions and follow a ‘herd immunity’ strategy.

The declaration says it would be better to ‘allow those who are at minimal risk of death to live their lives normally to build up immunity to the virus through natural infection, while better protecting those who are at highest risk’.

It comes after a study by King’s College London found one in ten people under 50 could be struck by ‘long Covid’ – suffering chest pains, breathing problems and chronic fatigue – if they contract the virus. 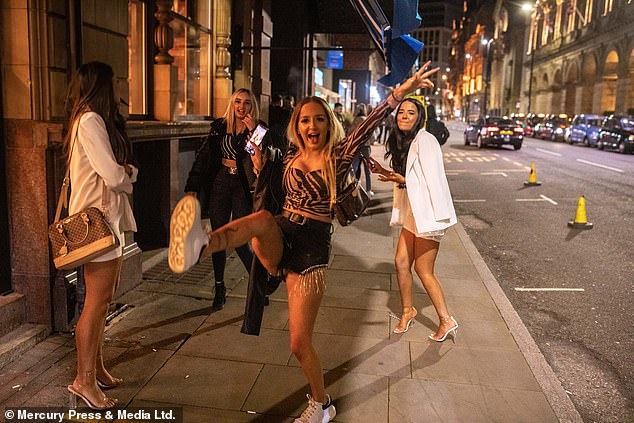 SAGE has warned a strategy of an ‘unconstrained epidemic’ in an age group will not work because there will be ‘leaks’ in infections to others. Pictured: Revellers in Manchester enjoy a night out ahead of tighter lockdown restrictions 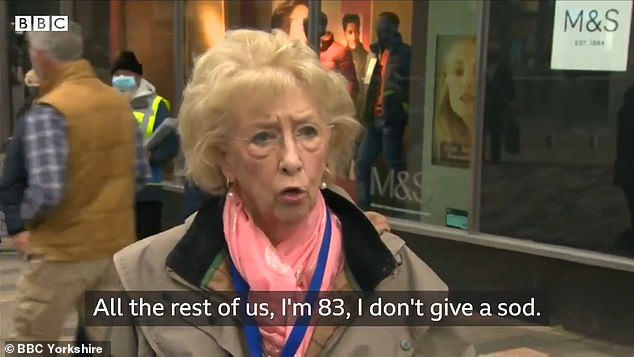 It comes after an 83-year-old shopper from Barnsley, South Yorkshire, said she ‘couldn’t give a sod’ about new restrictions coming into force in the area on Saturday

An 83-year-old woman from Barnsley has said she doesn’t ‘give a sod’ about staying at home after it was announced Tier 3 restrictions would come into force this weekend.

The outspoken shopper told the BBC =: ‘I think it’s all ridiculous, we should never have been in lockdown. All the people who were vulnerable should have been helped and kept home safe.

‘I look at it this way, i’ve not got all that many years left of me and i’m not going to be fastened in a house when the government have got it all wrong.

‘We need…how can we get the country on its feet? Money-wise? Where’s all the money?

‘By the end of this year there’s going to be millions of people unemployed and you know who’s going to pay for it? All the young ones. Not me because i’m going to be dead.’

From midnight Saturday the South Yorkshire areas of Barnsley, Doncaster, Rotherham and Sheffield will move under Tier 3, joining Manchester, Lancashire and Liverpool.

In the documents – dated October 15 and seen by The Times – SAGE says: ‘Such a strategy (of segmenting age groups) would not be viable because it would not be possible to prevent the virus spreading from younger people to older people.

‘A very large proportion of the population need to withdraw from daily life for many months, which would have profound consequences for the NHS as well as having unknown long-term effects in those infected.’

It added: ‘We do not know if long-term immunity results from infection with SARS-CoV-2; even if high levels of immunity could be achieved within the younger age group, it is almost certain that a further epidemic wave in older people would happen once segmentation ended.’

The top scientists also dismissed the possibility of segmenting the population in July, according to minutes of meetings published by the Government last week.

They said any move to split the populations by age is ‘likely to fail’, after modelling revealed a high level of contact in younger groups between those over 45.

But it also showed that people over 70 tended to mix with their own age group far more than with any other.

‘Policies to segment the population by age, relaxing restrictions for younger groups while restricting them for older groups, are likely to fail,’ they advised the Government.

‘The large amount of mixing across age groups would make it extremely difficult to prevent transmission between segmented age groups, regardless of the ethical and practical questions involved.

Minutes from July published last month also advised against plans for everyone over the age of 45 to shield, saying around two-thirds of people in the UK live in a household including at least one person in this age bracket.

They note: ‘Data shows that people tend to have more contacts with others around their own age, but also have a significant number of contacts with those 20-30 years older and younger than themselves (likely to mainly be contacts between parents and children).

‘There are also significant levels of contact between grandparents and children.’

The possibility of segmenting the population, while only briefly flirted with by the Government, has gained support among some backbench Conservative MPs.

Steve Baker has called it a ‘credible plan B’, while Chris Green argued there were ‘better alternative to the Government’s approach’, after quitting as a junior education minister in response to mounting restrictions.

Scientists remain divided over whether ‘herd immunity’ can be achieved against Covid-19, with some dismissing it as ‘wishful thinking’.

Levels of antibodies against the virus – which are thought to indicate immunity – have dropped over time in those who have had it, studies have shown.

But there is yet to be in-depth research into whether T-cells against the virus persist in the blood.

These remember how to build antibodies against SARS-CoV-19 and could hold the key to immunity, as they are tripped back into production when the virus jumps back into the body.

There have been reports of people who had been infected with Covid-19 catching it a second time, but scientists have warned this is a rare occurence.

An Oxford-based firm announced today it was working to assess the T-cell response of coronavirus vaccine candidates to assess what immunity they had triggered.

The UK Vaccine Taskforce has chosen Oxford Immunotec to supply T cell testing for its assessment of different vaccine candidates.

WHAT IS HERD IMMUNITY AND WILL WE GET IT FOR COVID-19?

Herd immunity occurs when a disease runs out of room and can no longer spread because enough of the population have been exposed to it, either because they’ve already had it or have been vaccinated.

If nobody is immune to an illness – as was the case at the start of the pandemic – it can spread like wildfire. But if, for example, half of people have developed immunity there are only half as many people the illness can spread to.

As more and more people become immune the pathogen finds it harder and harder to spread, until its pool of victims becomes so small it can no longer spread at all.

The threshold for herd immunity is different for various illnesses, depending on how contagious they are – for measles, around 95 per cent of people must be vaccinated to it spreading. For polio, which is less contagious, the threshold is about 80-85 per cent.

But because there is no vaccine for Covid-19, it means actively hunting down herd immunity through natural exposure is controversial because it would mean tens of thousands of people would die.

Government advisors have previously said around 60 per cent of Britain would need to be infected to achieve herd immunity — around 40million people. But, in theory, it would mean around 240,000 Britons would die, given that the SARS-CoV-2 virus is estimated to kill around 0.6 per cent of everyone it infects.

And scientists still do not have any firm proof as to how long immunity actually lasts once a person has fought off Covid-19, and doctors around the world have warned of re-infections — even though the evidence suggests they are less serious.

Some research has suggested the herd immunity threshold could actually be as low as 10 per cent, if it spreads more rampantly among the most socially active. This is because they are into contact with others more regularly and are, therefore, more likely to spread the illness.

Herd immunity without a vaccine is considered a controversial route for getting out of the pandemic because it gives a message of encouraging the spread of the virus, rather than containing it.

No 10 was even forced to deny herd immunity was the strategy after Boris Johnson’s chief aide Dominic Cummings reportedly confirmed the plan at a private event back in February, allegedly saying it was ‘too bad’ if it meant ‘some pensioners die’.

And leaked emails published last month showed that both Sir Patrick Vallance and Professor Chris Whitty faced backlash from academics over the controversial ‘herd immunity’ approach that was further discussed in March.

Meanwhile, unlike most European nations, Sweden never imposed a lockdown and kept schools for under-16s, cafes, bars, restaurants and most businesses open when the disease hit Europe in February.

Researchers have even suggested that the Scandinavian nation has since built up a degree of immunity to the virus, with one academic claiming that the virus may now have run out of steam in Sweden.

But data compiled by Our World In Data — a website that has tracked the pandemic since it began — suggests cases have began to rise again over the past few weeks. For instance, Sweden’s seven-day average of daily infections stood at 560 on October 1, up from 250 at the start of September.