Twelve hundred beachgoers have been rescued in just seven days as NSW lifesavers struggle with large crowds revelling in a post-COVID summer, prompting warnings after a spate of drownings at unpatrolled beaches.

Surf Life Saving NSW has issued a plea to swimmers to swim between the flags following the deaths of 26 people nationwide since December 1 – six of which have been in NSW.

Two fathers drowned this week while saving their children from deadly rips on unpatrolled beaches.

On Tuesday, a 42-year-old father from Sydney died at Back Beach at Back Head near Forster while rescuing his daughter. A surfer took the girl to shore before returning for the man who was unresponsive by the time they reached the beach.

A 32-year-old man also was pulled dead from the water off an unpatrolled beach at New Brighton, north of Byron Bay, on Monday. 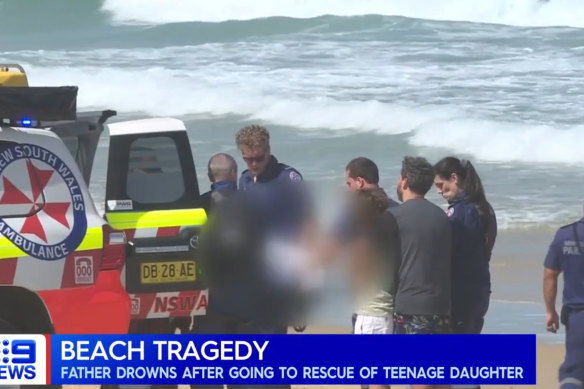 A 42-year-old father from Sydney died at Black Head near Forster while rescuing his daughter.Credit:Nine News

SLS NSW chief executive Steven Pearce said this summer was the “perfect storm” for potential drownings, as Australians flocked back to the beach to enjoy a summer free of COVID restrictions and extreme weather events.

“To see the lifesavers making 1200 rescues in seven days is unbelievable; we’ve never seen stats like this in well over five years. And that’s people being pulled out of the water,” he said.

“It’s been a perfect storm and what we are really concerned about is [the fact] it’s only the first week of [January].”

Pearce said drowning figures have been exacerbated by the number of people looking to avoid crowds by visiting unpatrolled beaches.

“We are just seeing mass inundation along the NSW coast which is great for communities but taxing for the lifesavers,” Pearce said.

“As long as this hot weather continues, we are going to see the crowds. We are just super concerned that this is going to push people to unpatrolled locations and that this drowning toll is going to climb.”

With forecasts pointing towards drier weather this summer, Surf Life Saving NSW geared up ahead of December by increasing the number of rescue jet skis and helicopters, and sending Sydney lifesavers to regional areas.

Pearce said he would never blame a parent for trying to save a drowning child, but urged them to use a flotation device in a rescue.

“You never see a lifesaver not take a rescue board or tube in with them when they perform a rescue,” he said.

“It just comes to the fact, if you are going to attempt a rescue, you need a flotation device, because when you get out to them, you need something to hang onto.”