Fluffy little additions atop a Collins Street tower are providing Melburnians with a much welcomed distraction from lockdown life with the arrival of newly hatched peregrine falcon chicks on Thursday.

The nestlings, who have arrived almost a year to the day since their parents’ 2020 brood, kept close to one another during the first hours in their nest and kept warm into the night amid the sounds of city life.

The new trio could be seen on the popular 24-hour livestream, on a dedicated website for the 367 Collins Street birds, hatching one by one before crying out for a feed.

Avid followers took to social media sites to share the happy news that the birds began to hatch from early Thursday morning with thousands sharing hour by hour updates online.

“Breaking news from your favourite reality TV show!⁠ ⁠ Here’s the magical moment when the first Collins St Falcon chick hatched earlier today. We wish this next generation of peregrines all the best,” Birdlife Australia wrote.

“The 367 Collins St Falcons are a lockdown plus. First followed them last year. So mesmerising,” tweeted Faye Simpson.

The family of falcons and their pending new arrivals were thrust into the spotlight last week a 5.9 magnitude earthquake hit near Melbourne.

Live footage of the bird’s nesting box showed the building shaking back and forth as one of the parent falcons appeared hyper alert and somewhat confused before leaping from the building with a squawk to see what all the fuss was about.

A breeding pair was first discovered on Collins Street tower back in 1991. Since then, bird watchers have moved to construct a special box to help keep any eggs and nestlings out of any water each year.

And upgrades cameras have allowed fans to watch their every moves around the clock. 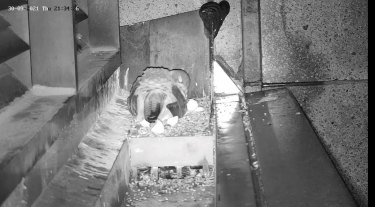 Nighttime for the new chicks.

Three nestlings hatched on the skyscraper on October 2 last year to the delight of fans.

Experts say the chicks will likely feast on pigeon thanks to their parents over the coming months with Mum and Dad taking turns to sit on the chicks to keep them warm and protected from the Melbourne elements.

Melbourne is up for a wet but mild temperature few days with showers forecast daily right up to Wednesday.