A mother today described Manchester Arena suicide bomber Salman Abedi as walking with a ‘swagger’ moments before he murdered 22 innocent bystanders and injured hundreds of others.

Suzanne Atkins had to desperately search for her daughter on the floor of the City Room, where victims lay dead or dying after the blast in May 2017, the public inquiry into the terror attack heard.

Mrs Atkins had gone to pick up her daughter and her daughter’s friend, who had been attending their first concert to see Ariana Grande perform.

The college lecturer had seen Abedi, who passed within a metre of her, carrying a large rucksack on his back, ‘walking with purpose’ as he crossed the foyer.

Abedi was surrounded by parents awaiting the crowds of excited youngsters emerging at the end of the gig. Mrs Atkins said in a statement to police read to the inquiry: ‘He was stooped and had a bit of a swagger about him. 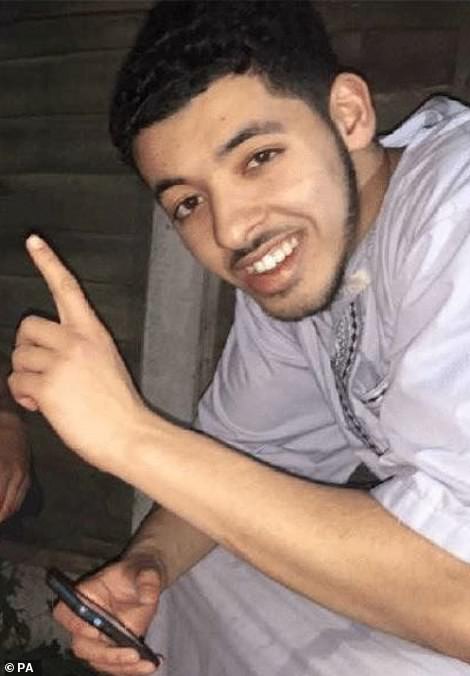 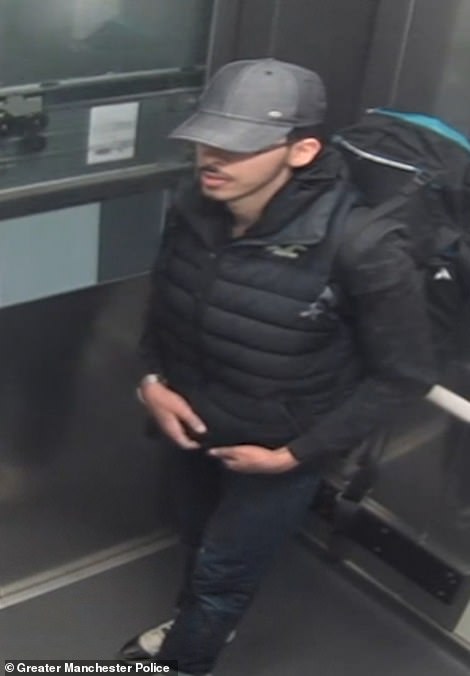 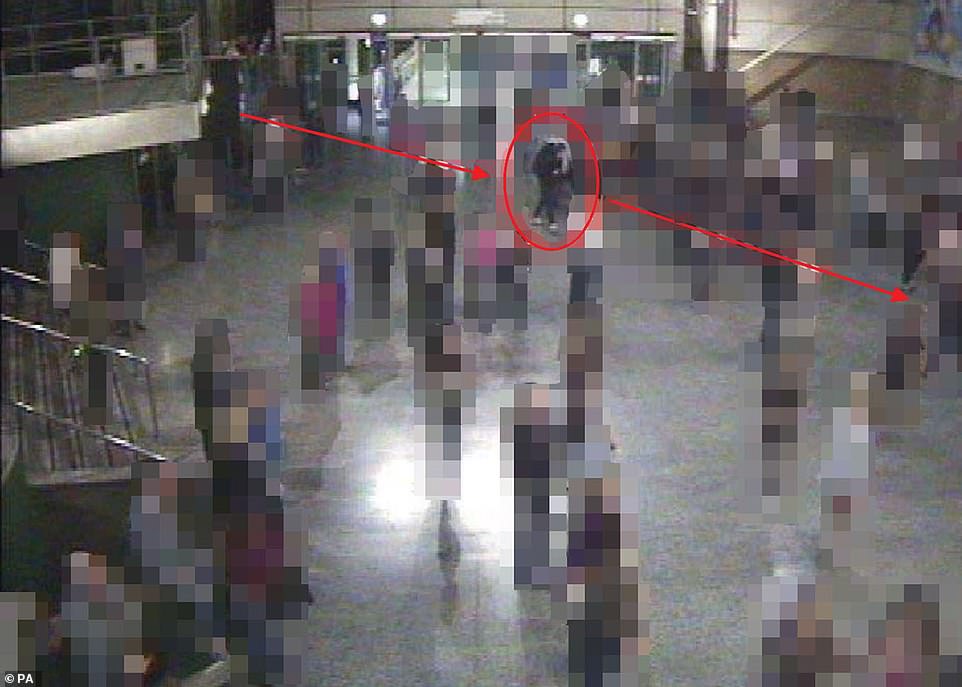 A CCTV still image of Salman Abedi at Manchester Arena on May 22, 2017, moments before he detonated his bomb

‘He looked out of place in amongst a crowd of young girls and families whilst everyone else was looking around and towards the exits. He just seemed to be different and have a purpose. Knowing where he was going. I only saw him that once for a matter of seconds whilst I was crowd-watching but he stuck in my mind.’

Seconds later, Manchester-born Abedi, 22, detonated his device, sending thousands of nuts and bolts flying, the shrapnel shredding everything in its path.

Giving evidence, Mrs Atkins continued: ‘I think the bang came first, I could only see orange in my field of sight so it felt like a flash. It felt like something had rolled into me but was burning into my legs.’

Mrs Atkins then ‘went on ‘auto-pilot’ to find her daughter and her friend but amidst the chaos was told ‘another one’ had gone off. She added: ‘I assumed that was inside the Arena, so I thought that was worst. 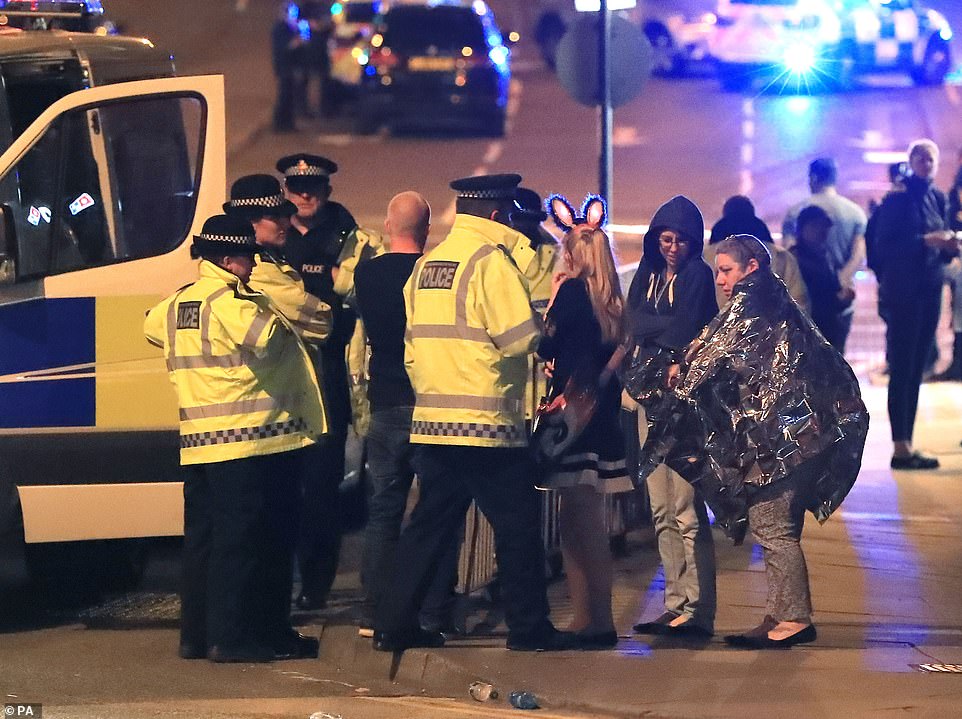 Scenes close to Manchester Arena on May 22, 2017 following the terror attack at the end of an Ariana Grande concert 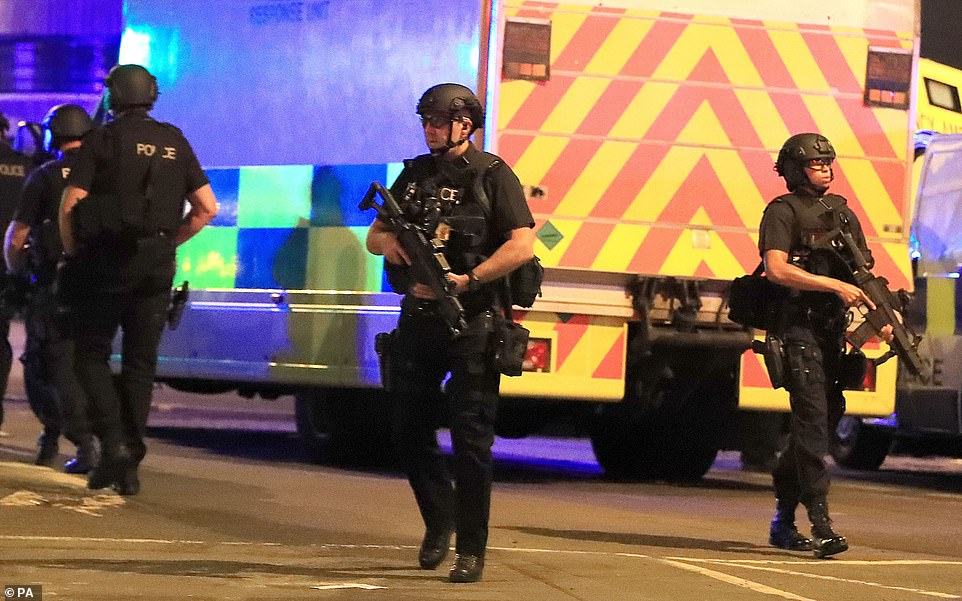 ‘I thought what had happened inside the Arena must have been bigger. I thought I might have lost my daughter and her friend, so I had to get inside. I felt the need to get in.

She tried to get into the Arena to find her daughter but was blocked by a steward at the doors. ‘And I could not get in, so I started to search where I could in the City Room. I searched the floor.’

Mrs Atkins said she also tried to make telephone contact with her daughter. ‘It kept ringing out, over and over,’ she said, but then felt an ‘intense and almost unreal sense of relief’ when she finally got through.

‘Eventually she did, she answered,’ she said. ‘I just heard this quiet voice – she’s got a very quiet voice. I think I just asked her if she was OK, then the telephone went off again.’ 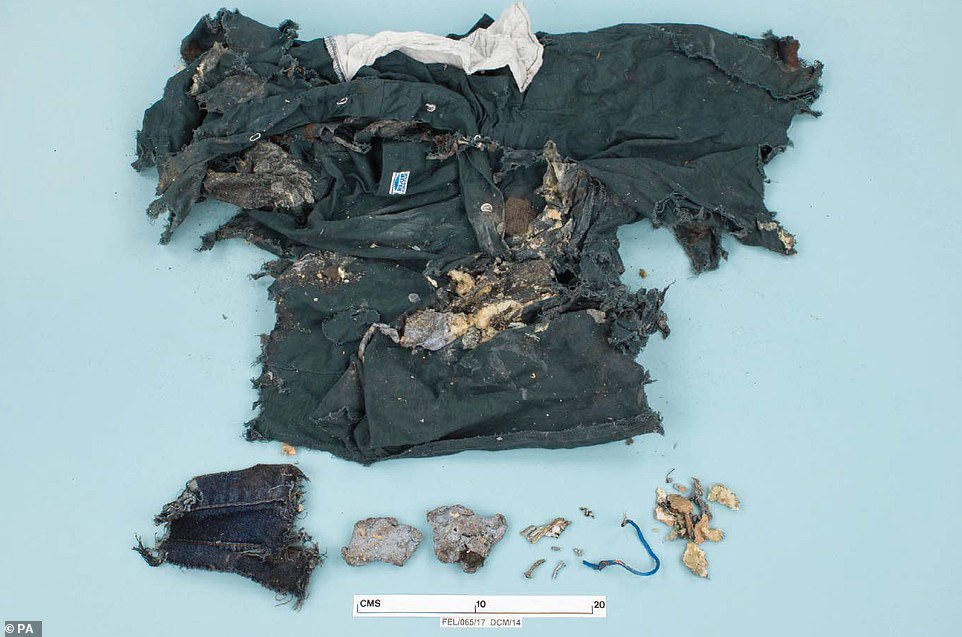 Charred clothing recovered after Abedi set off his bomb at Manchester Arena in the terror attack on May 22, 2017 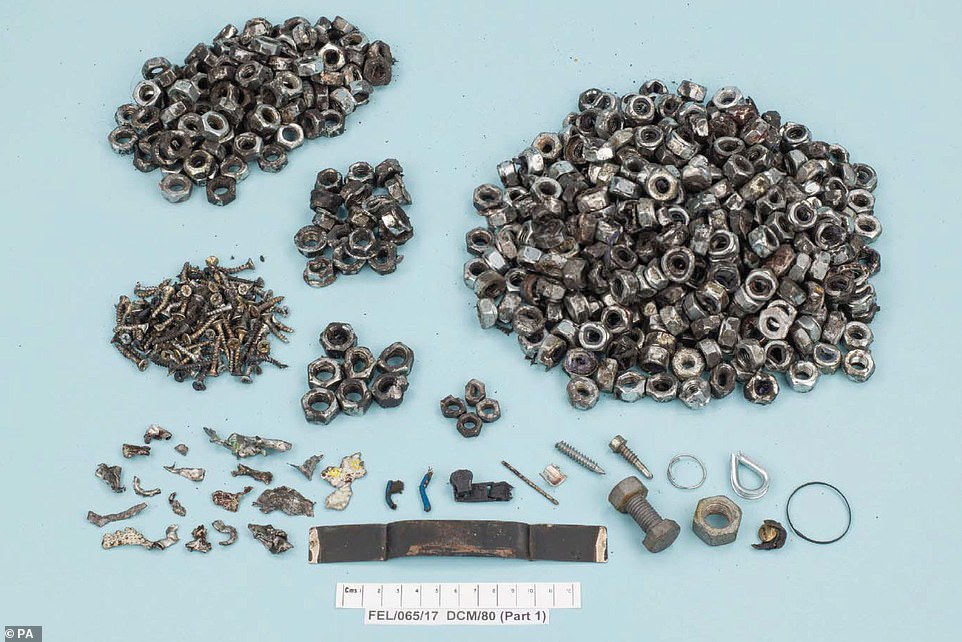 Also today, the inquiry heard a teenager and her best friend were injured in the terror attack as they passed just yards from the suicide bomber as he detonated his device.

Amelia ‘Millie’ Tomlinson was linking arms with Lucy Jarvis as the elated teenagers left the concert.

Just yards away was stood Salman Abedi, surrounded by parents, waiting for the crowds of youngsters to emerge into the City Room foyer of the venue.

Both teenagers, then aged 17, were injured as a smiling Abedi detonated his device, sending nuts and bolts shredding everything in their path and killing 22 bystanders in the terror attack.

Ms Tomlinson, now aged 21, from Wigan, told the public inquiry sitting in Manchester: ‘As we came through the foyer I remember I had my phone because I was going to phone my mum. 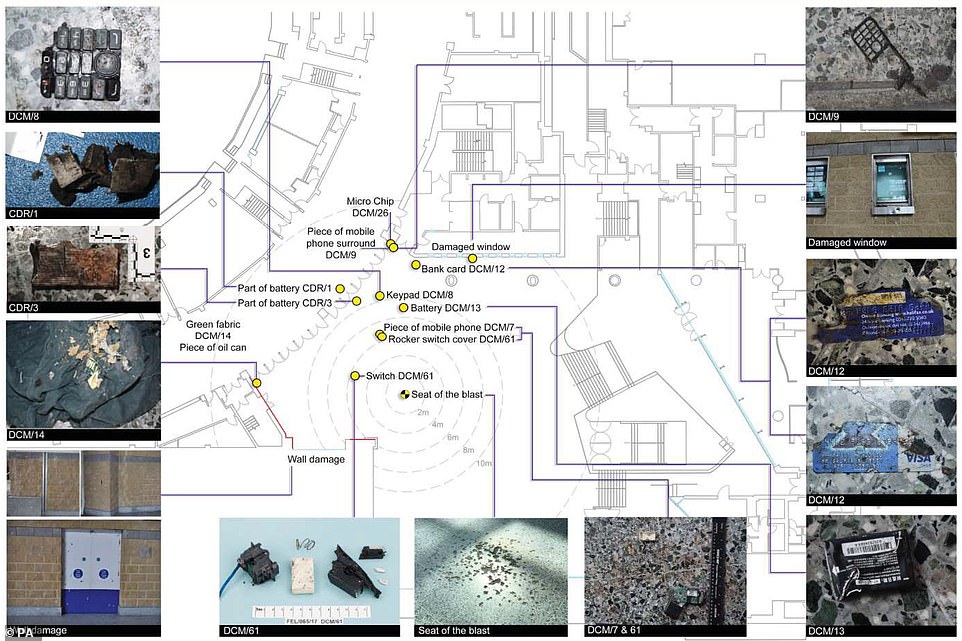 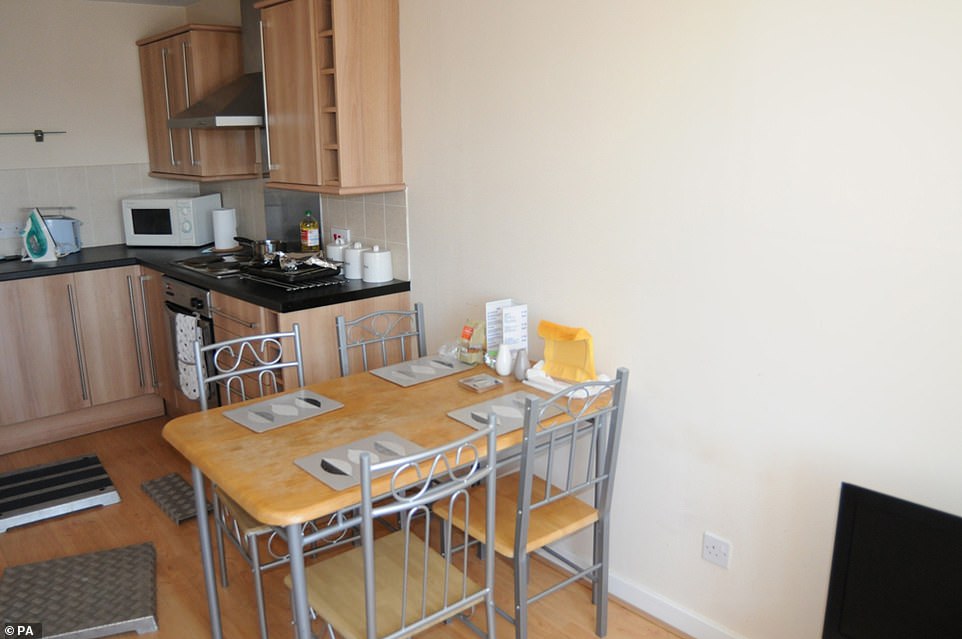 ‘All of a sudden I felt like this warm gush of air hit me and I felt really warm, like when you jump in a pool. I felt my body getting thrown around. I remember going into a ball. I had my eyes closed.

‘We both just looked at each other and knew something really bad had happened and we managed to get up and run back through the doors. I remember feeling like I could not run, but did not know why.

‘A bolt had gone through my shoe and foot. I could tell Lucy was quite severely injured. At this point Lucy sat down on the steps and said she could not walk and was going to die, and I could tell she was losing lots of blood.’ 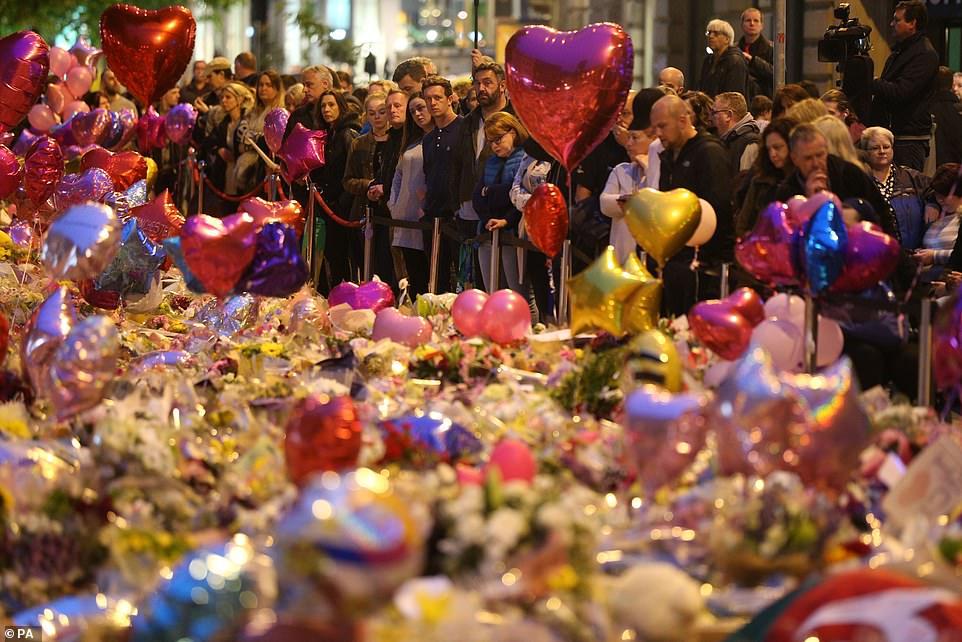 Mourners viewing tributes at St Ann’s Square in Manchester on May 29, 2017, a week after the Manchester Arena attack 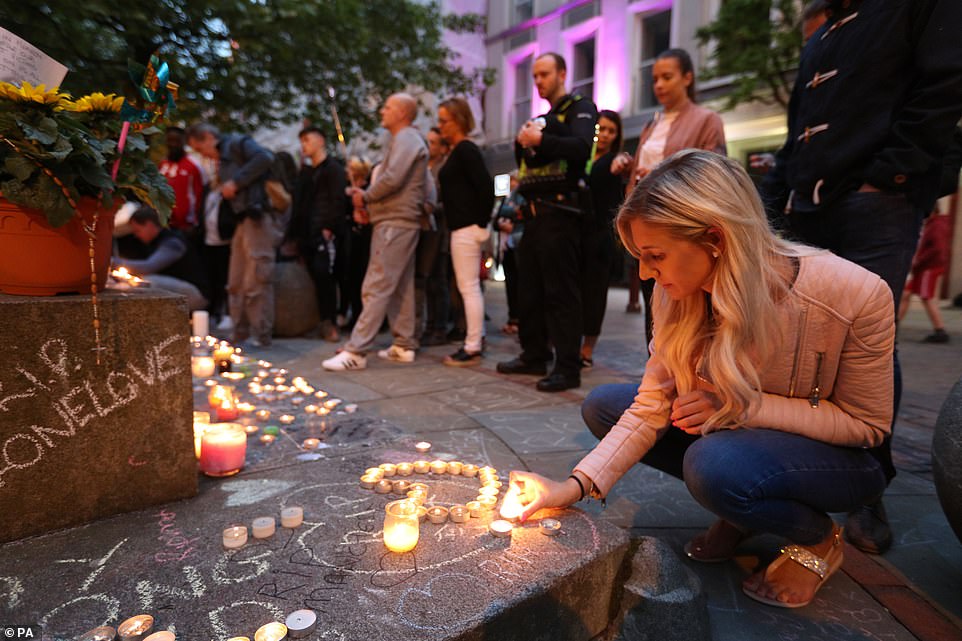 A woman places a candle on a stone at St Ann’s Square in Manchester on May 29, 2017, a week after the attack in the city

Ms Tomlinson had also suffered injuries to her fingers and struggled to work a phone, but managed to call Ms Jarvis’s mother to say there had been a bombing.

She and Ms Jarvis had grown up watching Grande on TV children’s channel Nickelodeon and were excited to see her perform, listening to her albums as they spent hours choosing outfits and getting ready, she told the inquiry.

Ms Jarvis was taken from the Arena by emergency responders and Robert MacFarlane, a first aider working for the Arena, wrapped Ms Tomlinson’s injured fingers up and took her outside.

The street was in ‘chaos’, Ms Tomlinson said, but she managed to meet up with her mother and grandmother, who had driven them to the event, and Mr MacFarlane drove them all to Manchester Royal Infirmary so the injured teenager could be treated.

Ms Jarvis is due to give evidence via videolink later today. The public inquiry, sitting in Manchester, is looking at the events surrounding the bombing by Abedi on May 22, 2017. The hearing continues.