'Medically exempt' woman says she was humiliated for not wearing mask

This is the moment a woman who says she is medically exempt from wearing a mask was ‘humiliated’ over the speaker by an easyJet pilot.

Lydia Rutter was returning from Tenerife to Manchester when she says flight attendants began berating her for not wearing a face covering.

Lydia takes medication to help with her severe anxiety, but claims she was accosted by angry staff who ‘turned the plane against her’ and even called the police.

But easyJet say passengers who are not able to wear a mask are required to produce a medical certificate or doctors letter and that Lydia was unable to do this.

Footage of the altercation was shared by Lydia’s friend Nick Ball, who says she was left disgusted by her treatment.

In one of the videos, a member of the onboard team is seen standing beside Lydia. 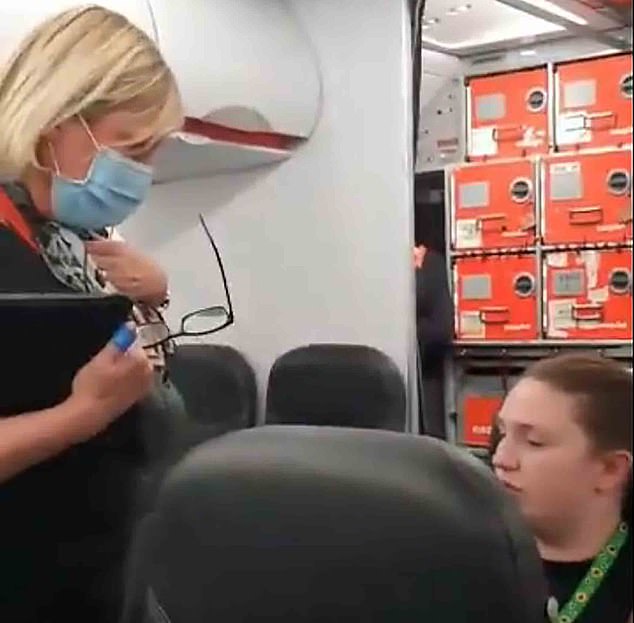 Lydia Rutter, pictured right, claimed she was harassed by easyJet staff after she refused to wear a mask on a flight to Manchester because she says she is medically exempt from doing to

Lydia can then be heard saying: ‘I am having a panic attack, can you come away from me.’

Lydia then buries her head in her hands as Nick asks: ‘Lydia, why are you exempt?’

Another video shows the captain’s announcement over the flight intercom, in which he can be heard saying: ‘Please use your mask in the way it is supposed to be used.

‘It is causing disruption to the passengers around you and the last thing that we want to do is to display this further as we go into Manchester.

‘We’ve all been on duty since six o’clock this morning.

‘Most of us left our houses at about five ‘clock so the last thing that we want to be doing when we get back to Manchester is having to deal with calling the police to the aircraft and any further escalation that is required.

‘So one final time, please do listen to instructions given from the crew and that way we won’t have to take this issue any further, thank you.’ 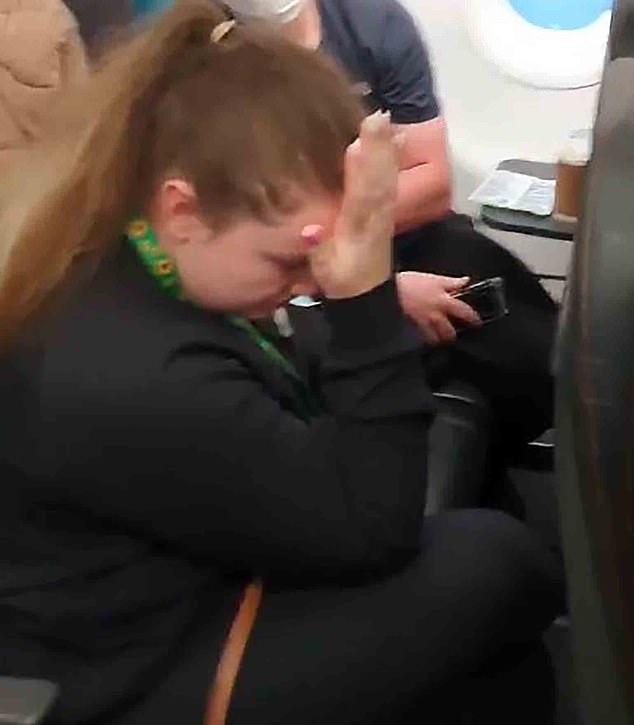 During the flight, Lydia claims she was singled out by the pilot and ‘humiliated’ as she suffered a panic attack while being told she must wear a mask by the cabin crew because she could not produce a doctor’s letter or medical certificate to prove she was exempt from wearing a mask

The flight then erupts in a round of applause from other passengers.

After the flight touched down, Lydia was then escorted from the plane by police before being released without charge.

A furious Nick took to Twitter to complain, branding the episode a ‘disgrace’.

What are the rules on wearing face masks while onboard a plane?

Government guidance states passengers must wear a face mask when onboard an aircraft in England, Scotland and Wales.

In Northern Ireland it is recommended that passengers wear face coverings onboard aircraft.

The rules state that a face mask may be removed to eat and drink, take medication, communicate with someone who relies on lip reading or to avoid harm or injury.

The Government also advises that passengers remain seated as much as possible and follow the instructions from the cabin crew.

easyJet’s policy, as stated on their website, requires passengers who are exempt from wearing a mask to produce a signed doctor’s letter or medical certificate and the company stresses there is no need to provide a reason for the exemption.

The policy also specifically states they do not accept lanyards as proof of medical exemption.

He wrote: ‘The pilot and your staff turned the whole plane against this woman.’

Lydia also explained her side of the story on Facebook. She said: ‘Here’s all the videos.

‘All lies told about me saying I was up and down the plane which I wasn’t.

‘I stayed sat down, I didn’t shout, swear or act in a bad manner whatsoever – just shows how corrupt some people are.’

Speaking today, Nick said: ‘She was approached by the manager of the aircraft and was asked to put a mask on on numerous occasions even though she had her lanyard clearly visible around her neck.

‘The manager was stating that it is law and she should wear it even if she’s got an exemption.

‘With an exemption she shouldn’t have been asked to wear it over and over again.

‘The staff had basically turned half of the plane against her which is basically a form of bullying.

‘The pilot made it known over the speaker and embarrassed her.

‘The manager wasn’t even trying to keep any form of social distance from her yet she hung over her trying to intimidate her in my eyes.

‘Police did not need to be called as there was no swearing, no disruption, no nothing. They made her out to be some kind of lunatic.’

Nick Rowlands said: ‘I’ll never fly with easyJet again. Seen some shocking performances from loads of their members of staff from day one.’

Emma Wills added: ‘That’s shocking, nobody is meant to question why you aren’t wearing a mask so what gives the woman on the plane the right to do so! 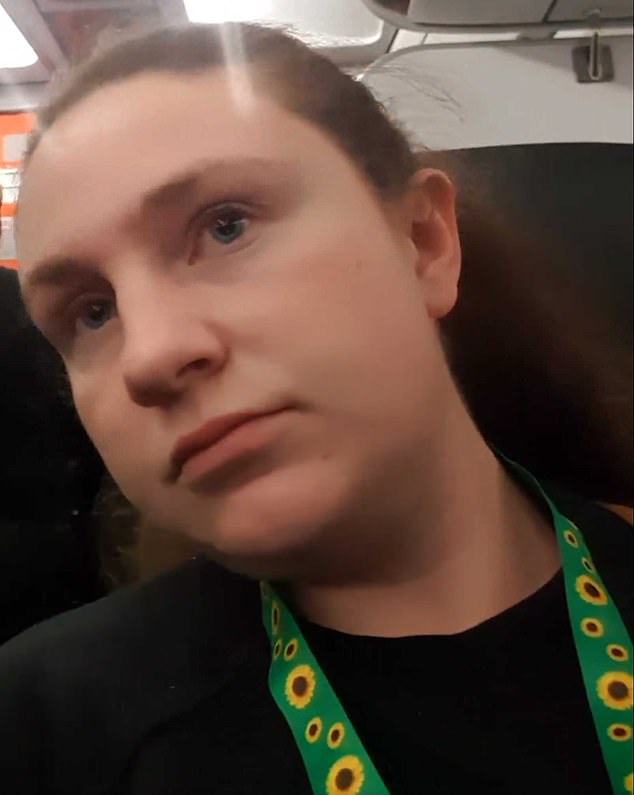 Lydia, who wears the green and sunflower lanyard to alert others she suffers from a hidden disability, was escorted off the plane by the police after crew complained she was disruptive

‘You’re wearing a hidden disability lanyard that should have been enough.

‘I would have lost it especially with being shown up on the plane like that and then being threatened with an arrest for literally nothing.’

And Cassie Whitham commented: ‘Make sure you take this further.’

A spokesman for easyJet told MailOnline: ‘In line with guidelines, all passengers are currently required to bring their own face mask for their flight which must be worn during boarding and onboard.

‘We know some passengers may not be able to wear a mask and so we also inform all customers of what to do if they require an exemption which is to provide a medical certificate or doctors letter as evidence of an exemption.

‘This was not provided on this occasion.

‘Unfortunately, due to the passenger becoming disruptive, it was necessary for the police to attend on arrival in Manchester.

‘The safety and wellbeing of customers and crew is our highest priority.’