Did Meghan Markle appear via video link at this week's Sandringham showdown? Even if she didn't, in my head she did. In my head, she didn't even just "dial in", but was beamed into the Queen's Long Library from the Canadian waterfront mansion in which she's sought refuge, like a Hollywood A-lister picking up an award from a provincial backwater it wasn't worth making the trip to. 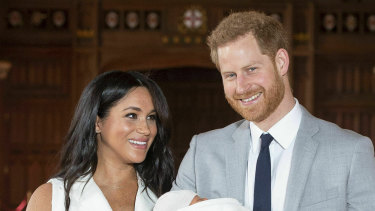 "I'm so sorry I couldn't be with you today," she would have begun, unleashing that expensive Hollywood dentistry. "I'm on mom duty, as you know. So if Archie suddenly needs a change, you may all just have to bear with me." Then a slanting of the brows and widening of the eyes – the way she was told, "to emphasise sincerity", in drama class. "But this moment means so much to me. Really."

One would hope so. There's little doubt it was Meghan who brought about the summit in the first place. Harry, bless his cotton polo shirts, won't even know what "progressive" means. And that the Duchess of Sussex wouldn't make the effort (or was too cowardly) to fly in and thrash out a plan with the Queen – but was happy to fly to New York to watch her pal Serena Williams in the US Open finals when Archie was four months old – is a defining fact in a long list of facts that have defined Meghan in my eyes.

Not one of those facts has anything to do with her heritage. Because, in case you've missed the diplomatic incident sparked by Megxit and stoked by the kind of commentators who are always ready to whip out the easiest and laziest card in the pack, it's not Meghan's actions that have driven out the young couple, but racism.

Writing in The New York Times, British author Afua Hirsch decried the UK's "racist treatment of Meghan", which "proved what many of us have always known: no matter how beautiful you are, whom you marry, what palaces you occupy, charities you support, how faithful you are, how much money you accumulate or what good deeds you perform, in this society racism will still follow you".

Supplant the word "racism" for "criticism", and Oxford-educated Hirsch is bang on. We Brits love our royals and, like a nation of nightmare mother-in-laws, we're overprotective and intrusive; zeroing in on every tiniest spousal misstep and capable of coddling an inexhaustive number of petty grudges at any one time.

So, yes, we sighed, snarked and snorted about silly things, like Meghan closing her own car door, the fact that in six months this woman spent five times what any royal in the whole of Europe had on clothes, and various Marie-Antoinette-isms involving things like penning empowering messages on bananas for sex workers. And yes, the courtiers will also have been uniquely poisonous about all of that and more.

But as a former Hollywood actress, this can't be Meghan's first encounter with back-stabbing and bitchery. And weren't Camilla and Fergie put through exactly the same baptism of fire?

Remember when Britain welcomed Meghan into the fold? I was in the grounds of Windsor Castle. I saw the Brits who had travelled to be there celebrating the arrival of the first African-American member of the royal family – many of them mixed-race couples (estimated to be 9 per cent of the population in the UK, as opposed to just 4.6 per cent in Wokeville, Canada, and 2 per cent in the US). 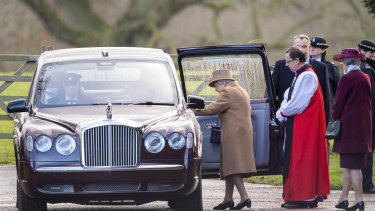 The Queen leaves a morning church service in Sandringham in England a day before the meeting with her grandson Prince Harry. Credit:PA

And what struck me then, as a Brit who has lived in the US on and off for the past decade, was how blissfully uncluttered and unpolarised we were by racial issues in comparison. How very – to coin Megxit terminology – naturally and unself-consciously "progressive": a thought echoed by Trevor Phillips at the weekend, who called Britain "the only country in the world where a sizeable mixed-race population has come about as a consequence of love, rather than coercion or slavery". It struck me, too, that we were very optimistic about a woman we knew so little about.

That optimism was eroded not by rapid-onset racism, but by Meghan's behaviour. The capriciousness over Frogmore Cottage, Archie's hide-and-seek christening and the ghastly press, who simply would not pander in the way that they were ordered to. Oh, and the overt whingeing about us to everyone from Pharrell Williams ("they don't make it easy") to Tom Bradby: "Not many people have asked if I'm OK," she told the journalist as – in an eye-watering feat of narcissism – she managed to eclipse every cause she and her husband had gone to Africa to highlight, and make it all about her.

In toddler tantrum-style, the list goes on, ending only with the emergency summit. So, no, Meghan: had you been blonde-haired and blue-eyed, you wouldn't have been judged any differently. Because this isn't racism: this is piece-of-work-ism.