One of the organisers behind Melbourne’s freedom rally protests has asked supporters to pay for his legal defence after he was arrested and charged with inciting others to breach public health directions.

Harrison Mclean describes himself on his website as having “helped launch the World Wide Rally for Freedom in Melbourne and around Australia to pushback against the encroachments on Victorian Freedom”. 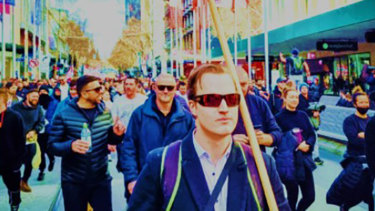 Harrison McLean (front) was charged by police after the Melbourne lockdown protest rally on September 18. Credit: @HarrisonMclean on Telegram

More than 230 protesters were arrested and six police officers needed hospital treatment after the Melbourne protests on September 18.

Police tried to thwart the rally, with a public transport shut down in the CBD, checkpoints for people travelling in by car, and more than 2000 officers deployed. But still, chaos ensued.

At one point, protesters broke through police lines near Richmond, hurling projectiles and abuse at officers. They screamed and were soaked in capsicum spray as they went, and one female police officer was trampled in the chaos.

Using an encrypted messaging platform about 1am on Sunday, Mr Mclean wrote that he was arrested at home and later released after an interview with police. He said “incitement charges have been laid against me” in relation to the worldwide rally for freedom in Melbourne on September 18.

“My legal battle now begins to continue the fight for Freedom in Victoria, against the Andrews Regime.”

A Victoria Police spokeswoman confirmed a 25-year-old Bayswater man was charged with incitement because he allegedly encouraged people to breach the Chief Health Officer’s directions at Richmond on September 18.

The man was bailed to appear at Melbourne Magistrates’ Court on April 11, 2022, the spokeswoman said.

Mr Mclean also describes himself on his website as “an Australian entrepreneur and innovator” and a libertarian activist with a background in physics and computational science. 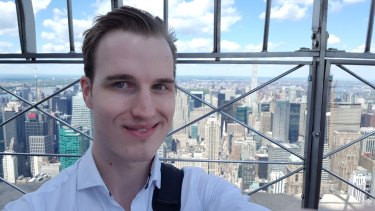 Melbourne’s anti-lockdown and anti-vaccination protest movement has continued since the September 18 protests.

On Monday, September 20, there were violent scenes when a group of construction workers, and others angry about a state government closure of worksites and vaccination mandate clashed, with union officials.

The following day a large, rolling protest swept across the city, and protesters brought traffic on the West Gate Bridge to a standstill.

On Wednesday, hundreds of protesters occupied Melbourne’s Shrine of Remembrance for several hours, and police shot at them with non-lethal rounds.

Scattered attempts at protests since then were quelled by police. On Saturday, protesters attempted to gather in St Kilda, but hundreds of police moved swiftly on demonstrators, making scores of arrests.

Protestors promised to rally “every day” but took Sunday as a “rest day”. Attempts on Monday to rally again at parks across the city fizzled out quickly. One small gathering of people held anti-vaccination signs in North Fitzroy’s Edinburgh Gardens, watched on by dozens of police, but the group swiftly dispersed.