The cost of building the Metro Tunnel has blown out by $2.7 billion, with taxpayers set to fork out an extra $1 billion for the underground rail project by 2025.

Transport Infrastructure Minister Jacinta Allan confirmed on Friday that the construction consortium building the project and the government will pay an extra $1.37 billion each, following a protracted dispute over extra costs on the major build. 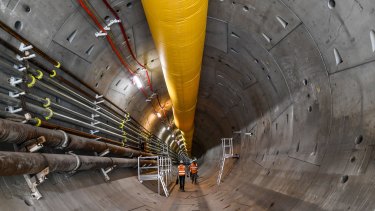 The site of the Metro Tunnel in West Melbourne.Credit:Justin McManus

The minister said this would ensure that the project was delivered on time.

Rail Projects chief executive Evan Tattersall said changes to the State Library and Town Hall stations in the CBD had driven up costs.

He admitted the Metro Tunnel project would exceed its initial $11 billion price tag but refused to indicate by how much.