Boris’s claim that WFH makes Britons more easily distracted – including visits to the fridge to ‘hack off a small piece of cheese’ – was ‘entirely reasonable’, says Business Secretary Kwasi Kwarteng

Boris Johnson’s suggestion that people working from home are more easily distracted was ‘entirely reasonable’, the Business Secretary has said.

Kwasi Kwarteng defended the Prime Minister’s comments about home-working as part of Government efforts to get more people back to offices.

With the end of Covid restrictions across the UK, Mr Johnson recently pledged to get Britons back behind their office desks more regularly.

The PM even admitted to his own struggles when working from home.

He described how he finds himself spending ‘an awful lot of time making another cup of coffee’, or ‘hacking off a small piece of cheese’ from the fridge, before ‘forgetting what it was you’re doing’.

Mr Johnson’s comments came on the back of a drive by Government Efficiency Minister Jacob Rees-Mogg to get civil servants back to their Whitehall desks and end a ‘WFH’ culture within departments.

Mr Rees-Mogg has drawn criticism for his efforts – which include leaving ‘sorry you were out’ notes for absent officials – while trade union leaders have demanded the Government to show ‘a bit of basic respect’ for those still working from home. 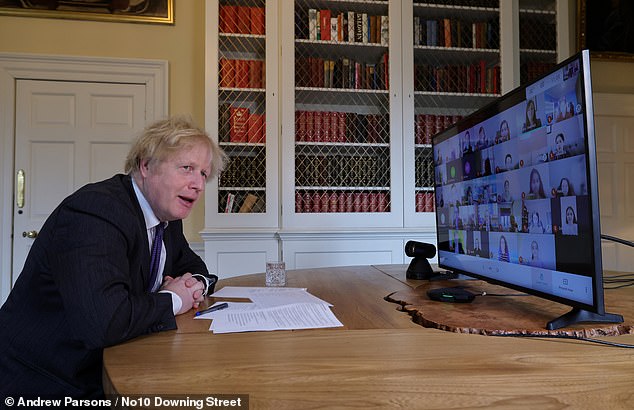 The PM described how he finds himself spending ‘an awful lot of time making another cup of coffee’, or ‘hacking off a small piece of cheese’ from the fridge, before ‘forgetting what it was you’re doing’

Asked about Mr Johnson’s recent comments, the Business Secretary said the PM was ‘making a point very vividly that people’s concentration, his concentration, our concentration isn’t as focused perhaps at home as it would be at work’.

‘I think that’s an entirely reasonable thing to say,’ he told the Sophy Ridge on Sunday show. ‘Many people say they work much better, in a much more focused way, in the office.’

Pressed on the PM’s suggestion that home-workers can be more easily distracted, Mr Kwarteng said: ‘A lot of people work from home in that way.

‘I mean we all have our different ways of working from home, but I think the point he’s making is that I think the majority actually would be more effective working in the office.

‘The thing about working in the office is it is not a doctrinaire thing. I think particularly for young people, if they are trying to learn a profession or learn about a business, that face-to-face contact is really important.

‘As Business Secretary I am trying to encourage more people to go back to the office so that they can share their experience with other colleagues.’

Frances O’Grady, the head of the Trades Union Congress, urged the PM to show ‘basic respect’ to those working from home.

She told Sky News: ‘It feels a bit ironic given the Prime Minister is the classic case of somebody who always works from home because he’s based in Number 10.

‘I would have hoped that politicians facing a living standards emergency had more important things to be getting on with.’

In a recent interview with the Daily Mail, Mr Johnson said Britons needed ‘to get back into the habit of getting into the office’.

‘I believe people are more productive, more energetic, more full of ideas, when they are surrounded by other people,’ he said.

‘My experience of working from home is you spend an awful lot of time making another cup of coffee, and then you know, getting up, walking very slowly to the fridge, hacking off a small piece of cheese, then walking very slowly back to your laptop and then forgetting what it was you’re doing.’

The PM also revealed plans to cut 91,000 civil servant jobs and use the £3.5billion to help pay for tax cuts to ease the cost of living crisis.

Mr Rees-Mogg has ‘suspicions’ that many civil servants are choosing to work from home on Mondays and Fridays as they think ‘the working week is shorter than the reality is’.

The Cabinet minister also vowed to check office attendance rates against Met Office weather reports, as he hinted some officials were choosing not to come into the office on sunny days.