Russia repeated its position that the West, by helping Ukraine, indicated that “they are a direct party to the conflict” and warned the admission of Ukraine to NATO could trigger World War III. 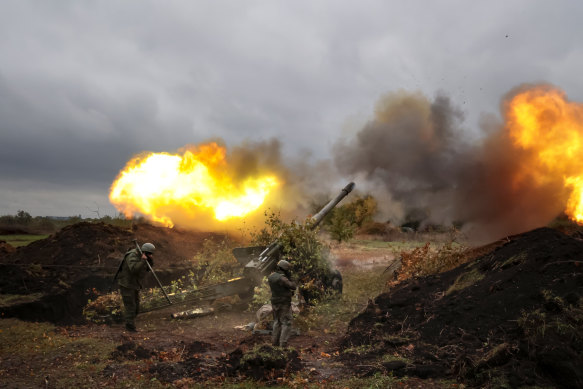 “Kyiv is well aware that such a step would mean a guaranteed escalation to a World War Three,” deputy secretary of the Security Council of the Russian Federation, Alexander Venediktov, told the state TASS news agency on Thursday.

Mayor of the port city of Mykolaiv, Oleksandr Senkevich, said in a social media post that the southern city was “massively shelled”. 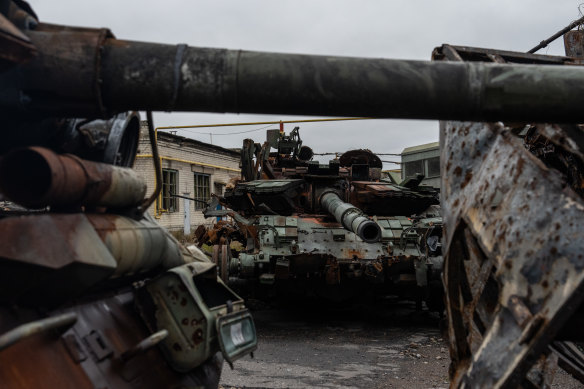 Russian military vehicles that were destroyed during fighting to recapture the strategic eastern town of Lyman.Credit:Getty

“A five-storey residential building was hit, the two upper floors were completely destroyed, the rest – under rubble. Rescuers are working on the site,” he said.

A shipbuilding centre and a port on the Southern Bug river off the Black Sea, Mykolaiv has suffered heavy Russian bombardments throughout the war.

Governor of the Kyiv region, Oleksiy Kuleba, said that based on preliminary information the strikes were caused by Iranian-made loitering munitions. These are often known as “kamikaze drones”.

Missiles struck more than 30 multi-storey and private houses, gas pipelines and power lines in the city of Nikopol in the Dnipropetrovsk region, and more than 2,000 families were left without electricity, Dnipropetrovsk Governor Valentyn Reznichenko wrote on Telegram.

Reuters was not able to immediately verify the report.

As his forces have lost ground since September, Putin has intensified the conflict, ordering the call-up of hundreds of thousands of reservists, proclaiming the annexation of occupied Ukrainian territory and repeatedly threatening to use nuclear weapons to protect Russia.

Putin has threatened to use nuclear weapons to protect Russian soil, which he says includes the four regions he declared annexed last month.

In New York, three-quarters of the 193-member General Assembly – 143 countries – voted on Wednesday in favour of a resolution condemning Russia’s “attempted illegal annexation” of the four partially occupied regions.

Only four countries joined Russia in voting against the resolution – Syria, Nicaragua, North Korea and Belarus. Thirty-five countries abstained from the vote, including Russia’s strategic partner China, while the rest did not vote.

Moscow in September proclaimed its annexation of four partially occupied regions in Ukraine – Donetsk, Luhansk, Kherson and Zaporizhzhia – after staging what it called referendums.

Zelensky said on Twitter he was “grateful to 143 states that supported historic #UNGA resolution …(Russia’s) attempt at annexation is worthless.”

In Brussels, more than 50 Western countries met to pledge more military aid to Ukraine, especially air defence weapons, on the heels of heavy retaliatory strikes this week ordered by Russian President Vladimir Putin in response to an explosion on a bridge in Crimea. 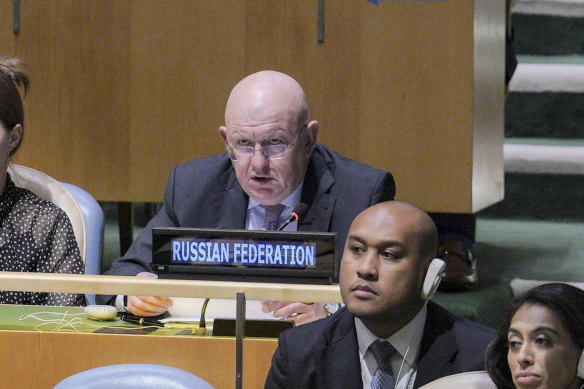 Pledges from allies included an announcement by France that it would deliver radar and air defence systems to Ukraine in the coming weeks. Britain pledged air defence missiles, and Canada said it would provide artillery rounds among other supplies.

At the meeting of the Ukraine Defence Contact Group in Brussels, U.S. Defence Secretary Lloyd Austin said Russia’s latest attacks laid bare its “malice and cruelty” since invading Ukraine on Feb. 24. At least 26 people have been killed since Monday in Russian missile attacks across Ukraine.

Ukraine had shifted momentum since September with extraordinary gains, but would need more help, he said. “… We’re going to do everything we can to make sure that they have what’s required to be effective,” Austin told reporters.

“The more assistance Ukraine gets now, the sooner we’ll come to an end to the Russian war,” Zelensky said by video to a forum during International Monetary Fund and World Bank annual meetings in Washington.

Russia’s UN Ambassador Vassily Nebenzia told the General Assembly ahead of the vote that the resolution was “politicised and openly provocative,” adding that it could “destroy” efforts to reach a diplomatic solution.