This is the moment a paranoid killer high on cannabis leads police on a fatal 161mph motorbike chase after shooting a neighbour who he believed was a Russian spy.

The 34-year-old used a shotgun to shoot the writer in the face, before crushing his skull with his boot in the brutal attack at Mr Nash’s thatched cottage in Upper Enham, near Andover.

Paranoid Sartain, who had smoked cannabis prior to the shooting, believed Mr Nash was involved in a spy plot authorised by Russian president Vladamir Putin.

He reached speeds of up to 161mph hour on a motorbike as he attempted to flee the scene of the shooting,

But the high-speed pursuit was brought to an abrupt end when Sartain reached Hurstbourne Tarrant.

As Sartain blasts through the leafy village at speeds of up to 145mph he clips an oncoming vehicle and crashes into a tree – dying instantly.

Today, at an inquest in Winchester, a coroner ruled Sartain’s death as the result of a road traffic collision. 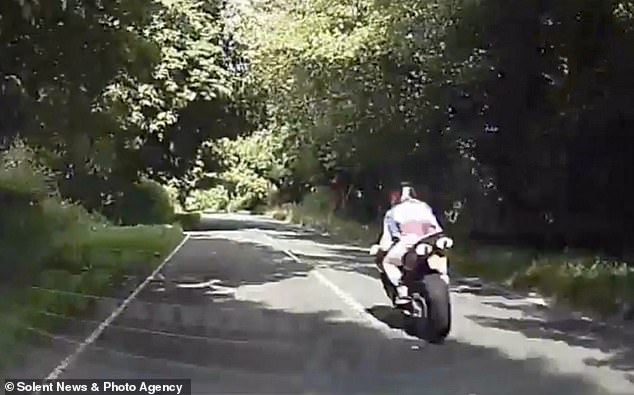 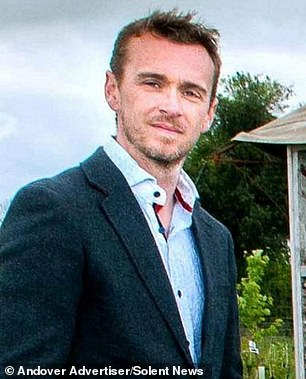 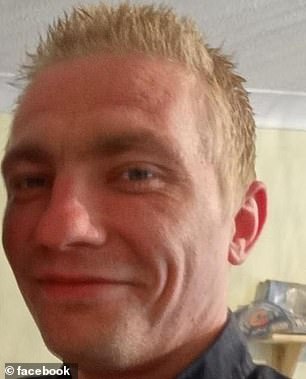 Alex Sartain (pictured right), 34, used a shotgun to gun down his neighbour James Nash (pictured left), 42, because he wrongly believed he was a Russian spy

Video shown at today’s inquest reveals how Sartain raced along the A343 in Hustbourne Tarrant as he attempted to get away from police following the shooting on August 5 last year.

Sartain, wearing only a t-shirt and shorts with a helmet, can even be seen waving at the police helicopter he was tracked by during the pursuit.

The ‘erratic’ rider can at time be seen slowing right down to under 30mph, but at times racing off and covering 230 metres in just 2.3 seconds – reaching speeds ‘in excess’ of 161mph.

The helicopter police camera loses sight of Sartain as he travels under tree cover.

While out of sight of the camera, Sartain clips a Fiat 500, crashes into a tree and dies.

Sartain suffered horrific injuries from the crash on August 5 in Hurstbourne Tarrant, Hants, around three miles from Upper Enham, where he attacked Mr Nash.

Mr Sartain had begged mental health authorities to treat his son – who had previously been sectioned – weeks before the incident, however a mix-up meant he was never seen.

Mr Sartain said: ‘Before all the problems he was a normal, happy lad. Drugs and a lot of other things changed him. 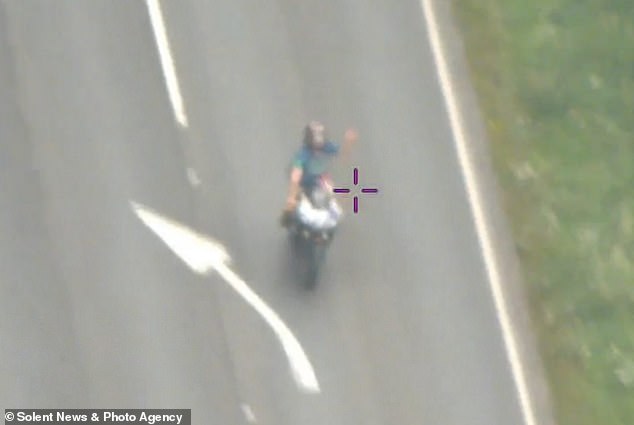 Sartain, wearing only a t-shirt and shorts with a helmet, can even be seen waving at the police helicopter he was tracked by during the pursuit. 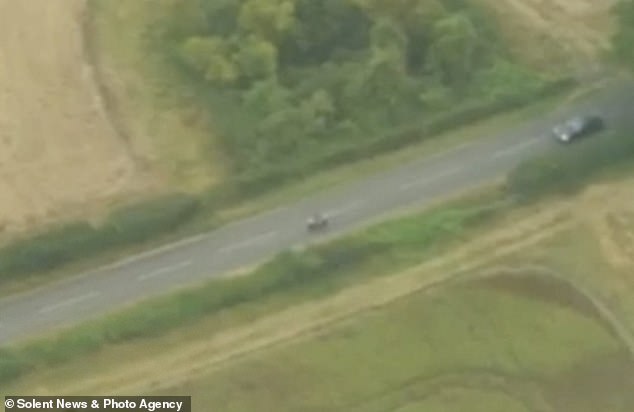 The ‘erratic’ rider can at time be seen slowing right down to under 30mph, but at times racing off and covering 230 metres in just 2.3 seconds – reaching speeds ‘in excess’ of 161mph

‘At the end he had mental health issues but up until then he was a good, hard working lad.

‘About five, six years ago he got involved in drugs. He always smoked a bit of weed but then it got more serious and then there was other crime, stealing meat, and he was always in trouble with police.

‘He had a good heart on him, was very polite.’

Mr Sartain said he contacted mental health services as he was worried about his son, who was diagnosed with depression and anxiety.

‘Alex had it in his head that he had been taken to the mental health place and tortured and everyone was out to get him, that we all knew about it and were not telling him.

‘He would always talk about Boeing, NASA, FBI and the military. He thought they all had something to do with him.

However, Sartain appeared to show signs of improving. Mr Sartain said: ‘He seemed to get a bit better and more down to earth, he seemed to improve and I was glad that we didn’t get him involved in that mental health again.

‘Seeing him get taken away from us, it was not very pleasant.

‘[On August 5] there was no warning, he didn’t seem like that was going to happen.

‘There was no hint that anything like that was going to happen, he was still acting strange but not like when I phoned the mental health place.’

Mr Sartain said after the attack his ‘hyped-up’ son arrived at his workshop.. He said: ‘He went off in a rage, he was very agitated, he looked very angry, there was obviously something that had happened.’

Sartain’s brother, Scott, said ‘he was not in the right state of mind to be riding’.

Scott said his brother fell into the ‘wrong crowd’ as a teenager, later used crack cocaine, and that the deaths of his mother and a close friend – who died in a motorbike accident – had a ‘profound impact’ on him.

A post-mortem revealed Sartain, a ‘confident’ rider, suffered a series of gruesome injuries as a result of the high-speed crash.

Pathologist Dr Amanda Jeffrey said the injuries were so ‘catastrophic’ they were ‘incompatible with life’ and that he would have died instantly.

Around 24 hours after the crash, Samuel Llewellyn, a council waste collector, discovered a stash of weapons six miles and Sartain’s bike leathers six miles from Enham. 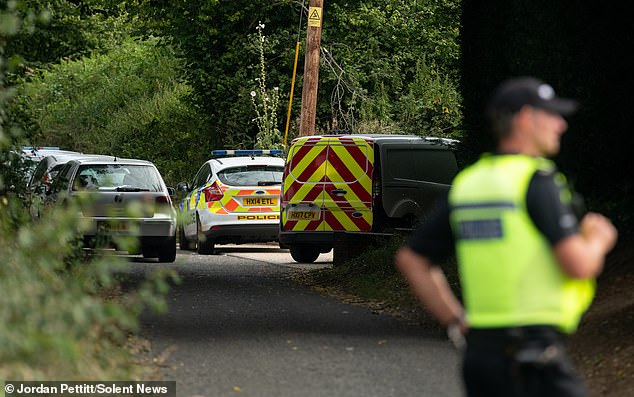 Police at the scene of the shooting at Mr Nash’s home in Upper Enham, Hampshire

The stash included a homemade shotgun, knuckledusters, an eight-inch spanner, and road-spikes called caltrops, which are used to disable vehicles.

Coroner Jason Pegg said Sartain had ‘smoked cannabis at some point’ on August 5 and a ‘modest’ amount of alcohol’.

Mr Pegg added: ‘How Alex thought his day might end knowing what happened to James Nash that afternoon cannot be ascertained, it just cannot be known what was going through his mind.

‘But, I find that when Alex clipped the car, this was an accident. Specifically, I’m not satisfied that the collision was deliberate.

‘It’s quite evident that the speed he was riding at contributed to the collision.

Recording a conclusion that Mr Sartain died as a result of a road traffic collision, the coroner Jason Pegg said: ‘After what had happened to James Nash that afternoon, it cannot be known what was going through Alex Sartain’s mind as to how his day would come to an end.

‘This was an accident, I am not satisfied that the collision was a deliberate act.’