Dr Freckleton, 74, said he grew up feeling like a freak. “If I did go out at times, kids would burst into laughter behind me as I passed: ‘That man walks funny!’ 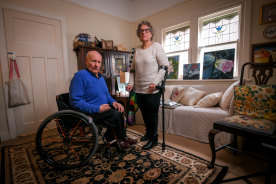 “First of all I was totally paralysed and then I got my upper body strength back but I had to wear callipers and crutches all my life and then a wheelchair later on.”

When the federal government introduced the National Disability Insurance Scheme in 2013, he hoped he would finally receive the support and equipment he needed to have a fully active life. 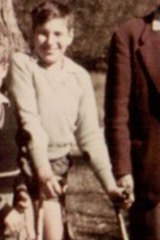 But to his dismay he discovered he was not eligible because he had already turned 65.

In Victoria, where the NDIS was rolled out from 2016, anyone born after 1952 was eligible for the scheme, whereas someone with the same disability born before 1952 was not.

“It’s so arbitrary – you are banned because you happened to have your birthday at the wrong time,” Dr Freckleton said. “It’s not only morally wrong and unfair but it’s a breach of the UN Convention on the Rights of Persons with Disabilities, which prohibits discrimination against people with disabilities on all grounds.”

Also excluded from the NDIS are people who become disabled after they turn 65. They, like Dr Freckleton, are forced to rely on the aged care system, which provides much less funding and access to specialised care, aids, equipment and therapy.

Spinal Life Australia – backed by other disability groups including Polio Australia and Muscular Dystrophy Foundation Australia – has launched a TV advertising campaign calling on the federal government to stop age discrimination against people with a disability over the age of 65.

The campaign comes amid warnings from NDIS Minister Linda Reynolds that the scheme faces serious sustainability issues, with expenditure forecast to grow to $40.7 billion in 2024-25, $8.8 billion above estimates.

Senator Reynolds said the design of the scheme reflected the Productivity Commission’s recommendation that a person needed to have acquired their disability and requested access to the scheme before the age of 65 in order to become an NDIS participant.

“The legislation put forward by the Gillard government in 2012 to establish the NDIS, with bipartisan support, reflects the Productivity Commission’s recommendation,” she told The Age and The Sydney Morning Herald.

“The government supports these longstanding policy settings. The NDIS is not intended to replace services already provided through the health or aged care systems.”

The Productivity Commission also recommended the establishment of a separate National Injury Insurance Scheme, to be funded by the states, which would cover people who had been catastrophically injured. This would reduce the cost to the NDIS, but has not been fully implemented.

Senator Reynolds did not respond to a question on whether the government had done any costing on removing the 65 age limit.

Last year Richard Colbeck, the Minister for Senior Australians and Aged Care Services, told ABC TV’s 7.30 it was not a piece of research he had seen.

However, given 1.9 million Australians over 65 have a disability, according to the Australian Bureau of Statistics, and the average payment to NDIS participants was $53,200 in 2020-2021, removing the age cap would cost the scheme billions.

(The 1.9 million figure includes people with a disability who were NDIS participants before they turned 65 and can remain on the scheme.)

Elizabeth Kendall, a professor of disability at Griffith University, said the cost of removing the age cap needs to be offset against the cost of aged care.

“As people age, the consequences of disability can become more profound and the impact of inadequate or insufficient care can mean more frequent costly hospital admissions caused by urinary tract infections, skin problems, respiratory problems and so forth,” she said.

“It may also mean earlier transition to residential aged care, which is far more costly.”

Last year’s royal commission into aged care recommended that by July 1, 2024, every person receiving aged care who is living with disability – regardless of when it occurs – should receive the same level of support they would be entitled to under the NDIS.

“It is a matter of equity,” the royal commission report said.

In its response in May, the federal government said the recommendation was subject to further consideration, with work to develop a new support-at-home program to be completed by the end of next year.

The government said it would take into consideration the level of support available to people in aged care, including those who would otherwise be eligible for the NDIS but for the age criteria.

The Disability Doesn’t Discriminate campaign calls on people to write to their federal MP asking them to remove the age limit for the NDIS or adopt the royal commission recommendation.

Spinal Life chief executive Mark Townend said in a few months the campaign would ask all MPs where they stand.

In 2019 independent MP Zali Steggall presented Parliament with a petition with almost 20,000 signatures calling on the government to extend the NDIS beyond 65 or improve the aged care system.

Opposition NDIS spokesman Bill Shorten said when the NDIS was being set up the aged care system offered much greater support, so the NDIS filled the gap for people with disability under 65.

“But, after eight years of the Coalition’s neglect of aged care, the NDIS – even though it has its problems – is now superior when compared with aged care packages,” he said.

“Labor believes people should get the care they need no matter how old they are.”