After a day of dramatic rescues, residents in the Turkish city of Izmir clung to hope Saturday night that survivors might still be found in the devastation of the magnitude-7.0 earthquake that killed at least 39 people in Turkey and Greece, injured more than 800 and levelled numerous residential buildings.

"The building is flattened, but I survived," Oguz Demirkapi, a technology manager who had been rescued from the rubble of his apartment building, said in a video message posted from his hospital bed. He described being pulled from beneath almost four metres of debris. 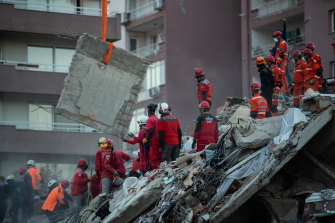 In all, President Recep Tayyip Erdogan said late on Saturday, more than 100 people had been extracted from the debris of buildings flattened by the Friday afternoon quake, which was centered in the Aegean Sea off Samos, a Greek island near Turkey's coast.

"We are receiving miraculous news," Tunc Soyer, the mayor of Izmir, said in a televised interview earlier in the day. Rescue teams, he said, were "working meticulously".

Rescue efforts continued at nine sites late on Saturday night, with officials saying they planned to continue around the clock. Estimates of the missing ranged as high as 180 early on Saturday. 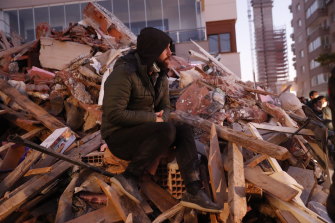 A local resident, staying outdoors for fear of aftershocks, sits ion the debris of a destroyed building as members of rescue services search for survivors in Izmir, Turkey.Credit:AP

The leader of a civilian search and rescue team, Murat Boz, said in a telephone interview that the work would continue "nonstop, without a break, for 24 hours, day and night".

"We have experienced survival at the 187th hour of a previous earthquake," Boz added. "So if we take that as a benchmark, we are at the very beginning."

"It is out of the question for our hope to fade," he said.

Erdogan said his government would set aside 24 million Turkish lira, about $4 million, to help survivors pay for lodging, furniture and other goods. 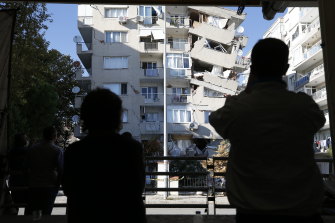 Local residents look at a destroyed buildings in Izmir, Turkey, as rescue teams on continued to save people from the rubble. Credit:AP

Finally, 23 hours after the quake, Perincek and two of her children were removed from the wreckage alive, as seen in pictures shared with the press by local officials. One child had died, news reports said, and rescue workers continued late into the evening in search of the fourth.

"For three hours we communicated with her," Cem Behar, one of the rescuers who helped Perincek and her children, said in a televised interview.

"When we first entered, she was hitting the walls to identify where she was," he added. "As we went further inside the wreckage, we were able to hear her voice, although muffled."

Joy was tempered with grief at every stop. Rescue workers pulled 20 people alive from a seven-story building in the city, but they also found 12 bodies in the structure, the news agency DHA reported.

Demirkapi, the technology manager who had been rescued, was in his third-floor apartment in the Bayrakli district, when the tremors started Friday afternoon. He ran to a corner of his apartment and curled up in fetal position, he said, as his home crumbled around him.

"They pulled me out from 4 metres' depth — I was down there for half an hour," Demirkapi said. "I was very, very, very lucky — especially after I saw the pictures of the building."