More than half of British staff travelled to work last week

The return to the office begins: More than half of British staff travelled to work last week as the reopening of schools accelerates end of WFH

More than half of Briton’s workers returned to the office last week as the country gets set to reopen after lockdown.

In the week ending March 14, some 53 per cent of workers travelled back to the office, according to data published by the Office for National Statistics today.

The increase in commuting and drop in working from home coincides with schools re-opening in England on March 8.

The shift also comes as restrictions gradually ease and amid a marked drop in Covid cases across the country. 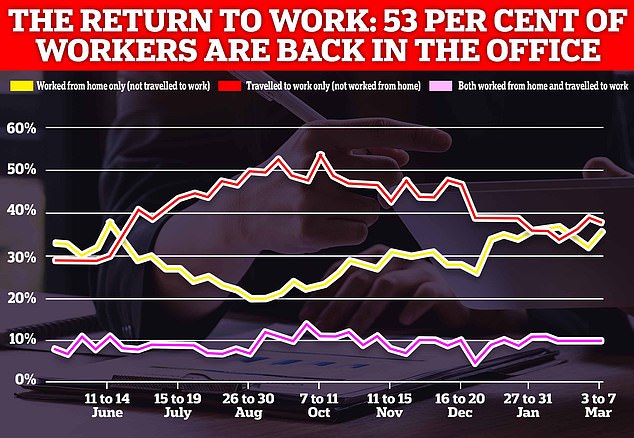 In the week ending March 14, some 53 per cent of workers travelled back to the office, according to data published by the Office for National Statistics 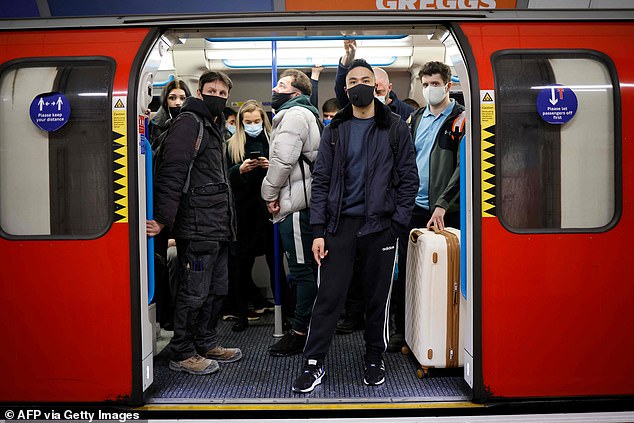 Commuters on the London Underground which was noticeably busier last night 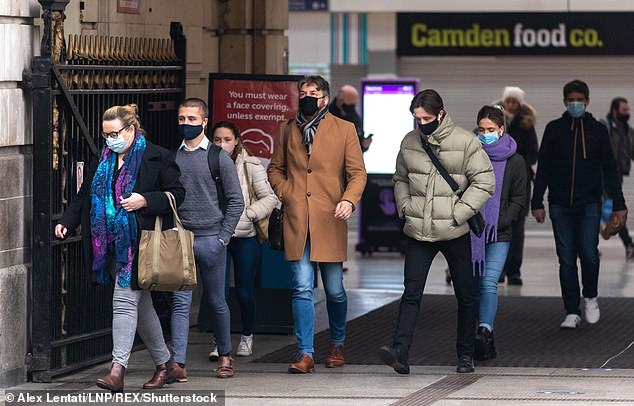 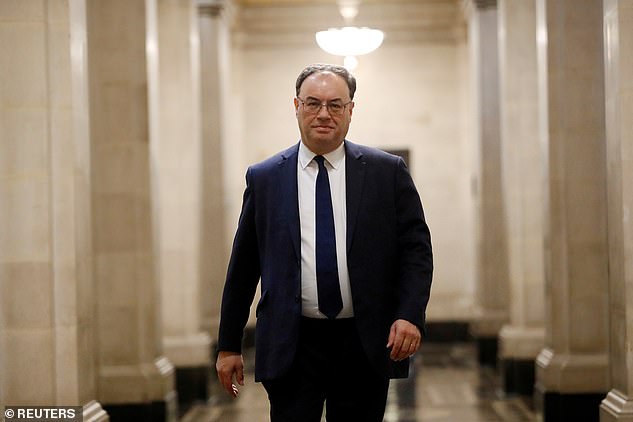 Bank of England governor Andrew Bailey (pictured) said he expects pandemic ‘habits’ such as working from home to stay, with people having a ‘hybrid’ lifestyle

Department of Health statistics showed 95 Covid fatalities were recorded today — 47 per cent down on the 181 registered last Thursday.

And daily infections fell by seven per cent after health chiefs posted 6,303 cases. For comparison, 6,753 were registered at the same time last week.

The drop in infection rates has slowed over the past week — but experts say this is linked to test capacity being drastically ramped up because of schools reopening in England.

But the positivity rate — one of the best ways of tracking an outbreak’s size when swabbing jumps — has fallen in every region despite the uptick in cases, suggesting the second wave is still firmly in retreat even though more cases are being spotted.

And separate data from Test and Trace showed there were 39,118 positive cases in the week ending March 10, the latest available, which was a drop of 14 per cent on the previous week. It also showed coronavirus tests had nearly doubled to 5.8million.

Department of Health figures on the vaccines roll-out today showed 25.7million Britons have now received their first dose, after a further 460,000 got their shots.

Ministers also dished out another 119,609 second doses, amid the looming demand to administer top-up doses to millions of vulnerable residents.

ONS data shows that people who worked exclusively from home decreased in the week ending March 14 by six percentage points from the previous week, to 30 per cent.

The number of people who travelled to work – either exclusively or in combination with working from home – increased by five percentage points from the previous week, to 53 per cent.

Speaking at the end of last month, the Prime Minister dismissed the idea that the lockdowns of the last year would lead to a permanent shift towards working from home.

Guidance to work from home is expected to remain in place until at least June 21 to head off the risk of a resurgence in Covid cases.

But the PM said he believed normal work patterns would resume once the lockdown restrictions are finally lifted.

This comes after the Bank of England governor Andrew Bailey said he expects pandemic ‘habits’ such as working from home to stay, with people having a ‘hybrid’ lifestyle rather than fully returning to offices.

But he warned there was little chance the UK would return to the pre-pandemic ‘normal’.

He suggested most workers might adopt a hybrid approach to their jobs when restrictions ease.

In an interview on BBC Radio 4’s Today programme on Monday he said: ‘I think we will see things change, because I think some habits and some practices will prove to be sustainable.

‘I think there will be for many people more of a hybrid model of working at home and working in a place of work.

‘I think we’ve already seen the retailing industry change quite dramatically in the last year and although I would expect some of it to change back it, it won’t entirely change back.

‘I would be very surprised if we went back to exactly as we were before Covid.’

And Goldman Sachs boss David Solomon described working from home as an ‘aberration’.

Of Goldman’s 6,000-strong UK workforce, only five to 10 per cent who are critical staff and cannot work remotely are commuting into offices in London and Milton Keynes.

The rest are continuing to work from home. 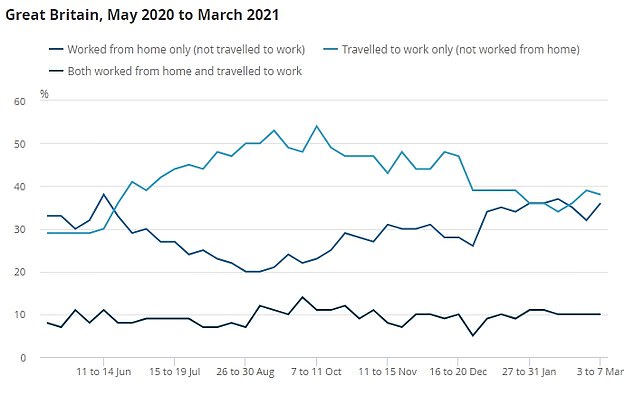 In the week ending March 7, some 48% of working adults reported leaving home for work. That figure was up to 53% the following week 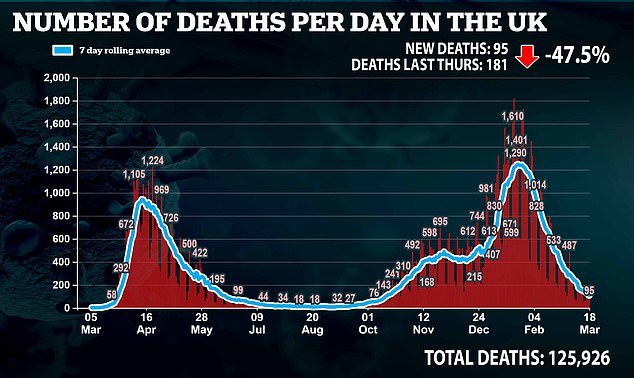 Department of Health data showed the number of Covid deaths recorded has halved in a week, as the second wave of the pandemic remained in retreat. There were 95 recorded yesterday compared to 181 last Thursday 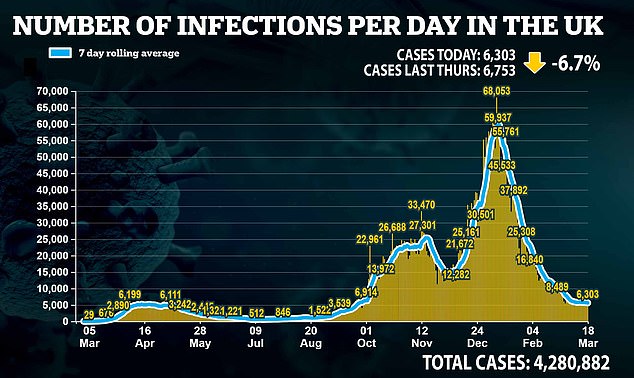 Covid cases also fell seven per cent in a week. There were a further 6,303 cases identified yesterday. For comparison, 6,753 were registered at the same time last week

Speaking to a virtual conference organised by Credit Suisse last month, Soloman said: ‘That’s a temporary thing. I do think that for a business like ours, which is an innovative, collaborative apprenticeship culture, this is not ideal for us.’

He also said it would never become the ‘new normal’.

The 59-year-old, who is based out of the company’s New York headquarters, also insisted the firm would be looking to ‘correct’ the remote working situation ‘as soon as possible’.

In September, JP Morgan’s chief executive Jamie Dimon said that working from home has had a negative effect on productivity while Barclays boss Jes Staley recently said he hoped the vaccine would allow employees to return to the office.