More than a THIRD of adults now ‘struggling financially’ as cost of living crisis continues to bite and price of butter, milk and meat soar at fastest rate for 13 years

More than a third of Britons are ‘struggling financially’ amid the worst cost of living crisis since the 1970s, a new poll has found – as inflation looks set to soar to 11 per cent by October, placing even more pressure of the average Brit’s purse strings.

According to the ‘wealth and wellbeing’ survey of 4,000 people, carried out by insurance firm LV= last month, more than half of adults – 53 per cent – say their finances have worsened over the last quarter.

LV= said the findings are the most negative since June 2020, when its quarterly survey first began – and many Brits predict things will get worse, with 43 per cent expecting their finances to deteriorate over the next few months.

It comes after families up and down the country this week united in horror at the rising cost of their weekly shop, particularly after a 750g tub of Lurpak butter went on sale at Sainsbury’s for £7.25.

In fact butter and milk, alongside meat and dog food, have been named as the worst offenders by market researchers Kantar, who say grocery prices are rising at the fastest rate in 13 years.

The situation has come about thanks to a perfect storm of surging post-pandemic demand and rising energy, fuel and transport costs, made worse by the invasion of Ukraine and the resulting shortage of grain.

Exacerbating their financial woes, six in 10 Brits told LV= researchers that their total monthly outgoings had increased over the previous three months, while three in 10 (30 per cent) said the amount they are saving had fallen over the same period. 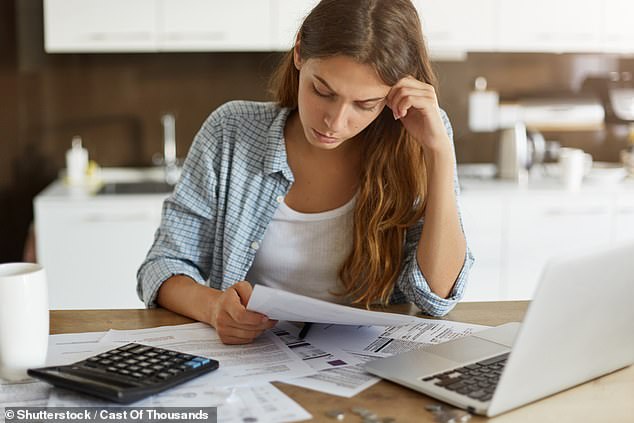 More than half of adults – 53 per cent – say their finances have worsened over the past three months, according to the ‘wealth and wellbeing’ survey of 4,000 people, carried out by insurance firm LV= last month (stock image) 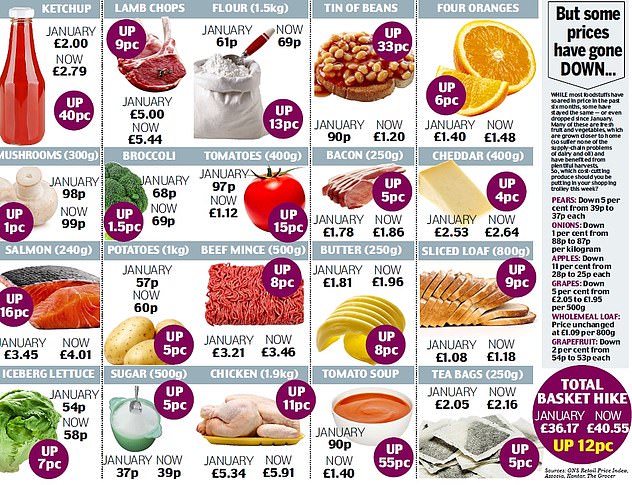 A nationwide survey of 4,000 households found that 56 per cent are buying fewer groceries as a result of spiralling prices

Nearly six in 10 (58 per cent), meanwhile, have seen an increase in their supermarket spending, while 31 per cent have been forced to spend less money on socialising.

More than a third (36 per cent) of UK adults surveyed described their financial situation as ‘struggling’ – and LV= said this has increased each quarter over the past year.

The latest Wealth & Wellbeing survey by insurance firm LV= has painted a gloomy picture when it comes to the average Brit’s financial concerns.

Statistics collected by The Grocer from the Retail Price Index also show the rising prices in supermarkets.

Below are what the poll of 4,000 people, carried out in June, and the latest statistics, mean for the average Briton:

12% – the average price increase of a weekly supermarket shop

30% said they are having to spend less money on socialising

36% described their financial situation as ‘struggling’

38% of Brits are worried about money

43% expect their finances to deteriorate over the next quarter

53% say their finances have worsened in the past three months

Nearly two-fifths (38 per cent) are worried about money, rising to 46 per cent of 18 to 34-year-olds and 44 per cent of parents with children aged 10 years old or under.

Clive Bolton, managing director of protection, savings and retirement at LV said: ‘The results of the latest LV= Wealth and Wellbeing Monitor highlight how the finances of millions of people are being squeezed by the large rise in the cost of living.

‘The indices for savings, financial outlook and outgoings are the worst recorded since we started surveying consumers during the coronavirus pandemic, and worse than in the dark days of Covid.

‘Consumer sentiment had been steadily improving between spring and early autumn 2021 but the sharp rise in the cost of living has dented consumers’ confidence.

‘Millions of people say they are struggling financially and standards of living are falling across the country.

‘Rising energy prices are becoming a significant problem for many people, and many families with young children and low income households are struggling.’

It comes as a separate survey of 4,000 households, by research firm Kantar, found that 56 per cent are buying fewer groceries as a result of spiralling prices, with the same proportion skipping meals in a bid to save money.

Leading coffee chain Costa has hiked its prices not once but twice since December, with a small cappuccino now costing a whopping £3.50.

Experts claim many of the increases come from rising farming costs, with fertiliser, animal feed and fuel all more expensive than they were six months ago.

These are being passed down to consumers, via suppliers such as supermarkets and coffee shops, hiking the prices of everyday basics.

These costs, in turn, can be linked to the Russian invasion of Ukraine in February, which has had a knock-on effect on energy bills, supply chains and commodities exported from both countries, namely wheat, corn and sunflower oil, as well as building materials and computer chips.

Combine that with the aftermath of a pandemic, which led to global shortages, production freezes and staffing problems, and it’s no wonder our food bills are rocketing.

Worryingly, Simon Roberts, chief executive of Sainsbury’s, warned yesterday that the strain of rising prices ‘will only intensify over the remainder of the year’.

‘The effects of this are going to last longer than I am sure most people expected,’ he added.

‘The price of food, fuel, fertiliser and labour have all gone up. We are seeing substantial cost impacts and they are not going to go away tomorrow.’

In an attempt to offer relief to some of the hardest hit, a package of cost-of-living support measures will kick in in the days and months ahead.

From that date, a first instalment of £326 will start to be paid out to low-income households on benefits, the Department for Work and Pensions (DWP) previously announced.

The second portion of the one-off £650 payment will follow this autumn.

From October, households will have £400 taken off energy bills.

The threshold for paying National Insurance (NI) was also raised to £12,570 this week, meaning many people will see an income boost in their July pay packets.

However, this follows a controversial 1.25 percentage point increase in NI earlier this year to pay for health and social care.