Mother, father and baby are killed in crash on busy Galway motorway

Mother, father and baby are killed in horror three-car crash after motorist ‘drove the wrong way’ along busy Galway motorway

A baby, mother and father are believed to be among four killed in a devastating three-car crash on a busy motorway in Galway.

The driver of another car, who was allegedly driving the wrong way on the M6 near Ballinasloe, also died in the crash, which occurred at around 7.40pm on Thursday.

It could take days to identify the bodies and confirm who the victims are due to the severity of the four deceased victim’s injuries, the Irish Mirror reported.

A source told the publication: ‘The bodies have not been identified yet and could take some time for that process to be completed.

‘This was an awful crash. You just have to look at the scene and the state of the cars to see how bad it was.’ 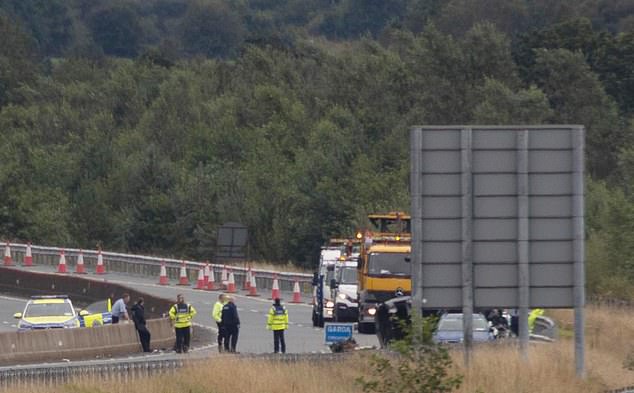 Gardai suspect a baby, mother and father were among four killed in a devastating three-car crash (scene pictured) on the M6 near Ballinasloe, Galway, at around 7.40pm on Thursday

The fatal crash brings the number of people killed on Irish roads in the last 24 hours up to six.

Gardai were said to be alerted to a car allegedly driving the wrong way down the M6 motorway on Thursday night, going westbound against oncoming traffic.

The motorist allegedly drove around two kilometres down the motorway, between junction 14 and 15, before colliding head-on with another car.

It is understood that the victims in the second vehicle were a mother, father and an infant child.

All four were pronounced dead at the scene and have been taken to Portiuncula Hospital, Ballinasloe, for post-mortem examinations, Gardai said.

Another person in a third car was also reportedly injured and has been hospitalised with non-life-threatening injuries.

The M6 was closed on Friday morning in both directions between junction 14 and 15, with forensic investigators at the scene. A technical examination of the scene has now finished and the road has fully reopened.

Gardai have asked any witnesses to come forward and any road users who may have camera footage of the crash to contact them.

Local councillor Dermot Connolly said the crash has ‘shocked’ Ballinasloe, saying he had passed the same spot on the motorway with his wife and children less than 24 hours before the crash.

He told the Irish Mirror: ‘Nobody wanted to wake up to that news this morning. People knew on Thursday evening that there was a serious incident on the motorway locally here. 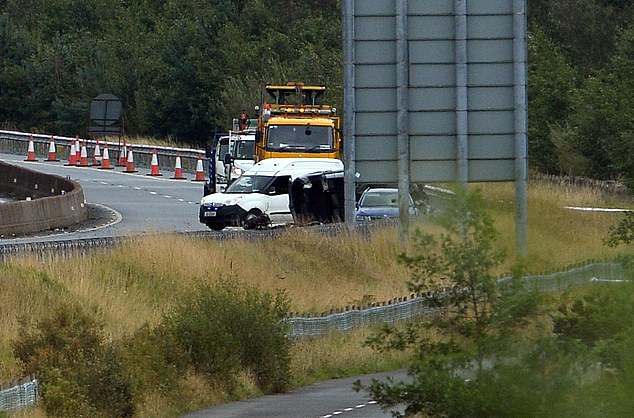 The driver of another car was allegedly driving the wrong way down the motorway. It could reportedly take days to identify the bodies. Pictured: Scene of the fatal crash on the M6

‘Our thoughts and prayers are with everyone involved and we issue our sympathies to the families involved.

‘Also, to the emergency services who had to come out and deal with a very difficult situation.’

On Friday, the Road Safety Authority (RSA) and Gardai issued an urgent appeal asking people to take greater care on the roads.

Sam Waide, chief executive of the RSA, said it had been a ‘dark 24 hours’.

He added: ‘Our thoughts are with the families of those who have been killed.

‘These deaths should serve to remind us that everyone is at risk when using the roads, we are at risk at any time of the day or week.

‘Life is fragile and using the roads is one of the most dangerous things we do each day, we must never forget this.’

Gardai also asked people to stay safe on the roads following the increase in road deaths this year.

Assistant Commissioner Paula Hilman said: ‘Not only has it been a horrific 24 hours on the roads, we are also seeing an increase in road deaths this year compared to the same period last year.

‘Road tragedies affect all parts of the country, every fatal or serious injury collision has a devastating impact on family, friends and communities.’

Ninety-two people have died in fatal road traffic crashes to date in 2021.