Mother-of-two, 39, with genetic blood disorder blasts her children’s school for threatening her with fines because she refuses to send them back while she is shielding at home

A mother-of-two claims she has been threatened with fines and prosecution after refusing to send her children back to school amid the coronavirus pandemic.

Lisa Diaz’s son Alex, 11, and eight-year-old daughter Helena have not been in school for more than a year after she pulled them out 10 days before the start of the first lockdown in March 2020.

The 39-year-old has a genetic blood disorder, and while she doesn’t fall into the clinically vulnerable category, she has been shielding because she ‘doesn’t feel confident’ with safety measures in schools to prevent the spread of the virus.

Ms Diaz says she has been emailing daily updates of her children’s work to Woodfield Primary School in Wigan, Greater Manchester.

The mother-of-two said she wanted to keep her children at home ‘to protect her family,’ but claims she is now being threatened with fines and off-rolling. 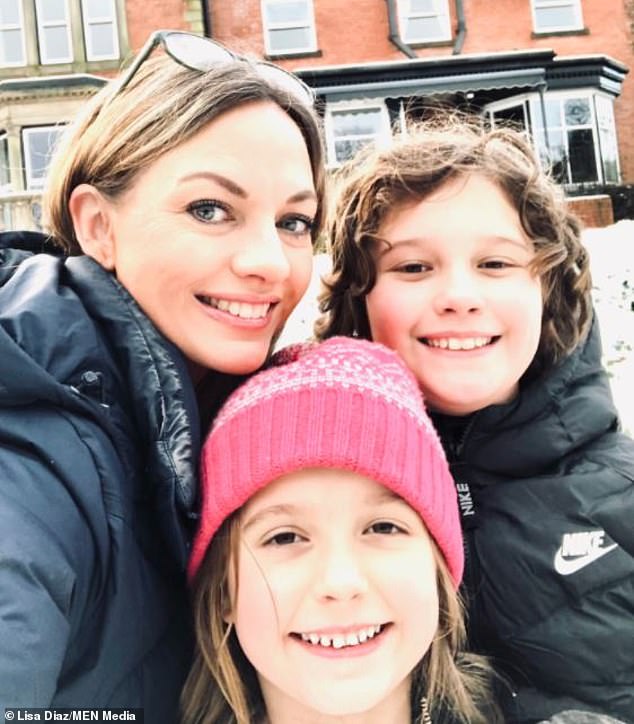 Lisa Diaz with her children Helena and Alex. She claims she is now being threatened with fines 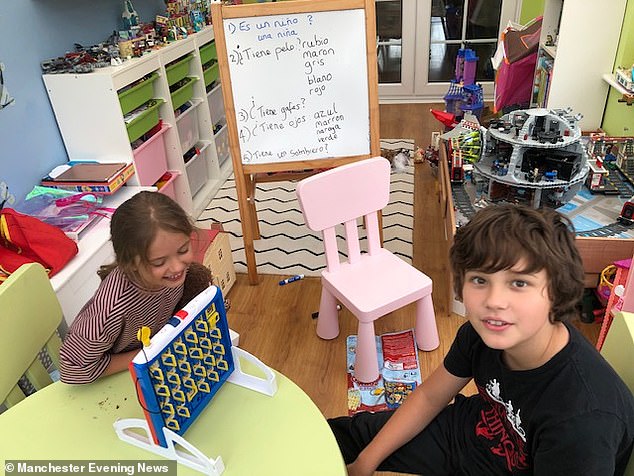 Alex, 11, and eight-year-old daughter Helena have not been in school for more than a year after their mother pulled them out 10 days before the start of the first lockdown in March 2020

This includes pressuring a parent to remove their child from the school roll.

When schools returned on March 8, the Government made attendance mandatory but said headteachers and local authorities could use their own discretion with families to authorise absences in ‘exceptional circumstances’.

Education Secretary Gavin Williamson said it was ‘right that there is local discretion in this matter’.

In a letter sent at the start of the academic year Woodfield headteacher, Anna Prior, said: ‘The legal position is that if a child is on-roll at a school, the expectation is that they should attend when the school is open.

‘It is not appropriate for school staff to provide work for children where families elect to keep them at home. Now that schools are fully re-open, attendance is mandatory and so I am unable to keep children on roll indefinitely when they are not attending.

‘For persistent non-attendance, I am obliged to refer to the local authority.’

Enforcement includes £60 fines for unauthorised absences, increasing to £120 if not paid within 21 days.

The headteacher suggested ‘elective home learning’ was an option for the family, but said she ‘very much would like Helena and Alex to remain a part of Woodfield’.

Ms Diaz said: ‘The fact of the matter is that headteachers and local authorities have discretion. The Government settled this at a pre-court hearing.

‘That I have been threatened with fines, prosecution and unlawful off-rolling for protecting my children during a global pandemic of a serious multi-system disease is beyond the pale. The stress has been intolerable.

‘Just as I would not send my children into a burning building because Boris Johnson tells me to, nor will I put them in an environment highly conducive to the spread of Covid-19.’ 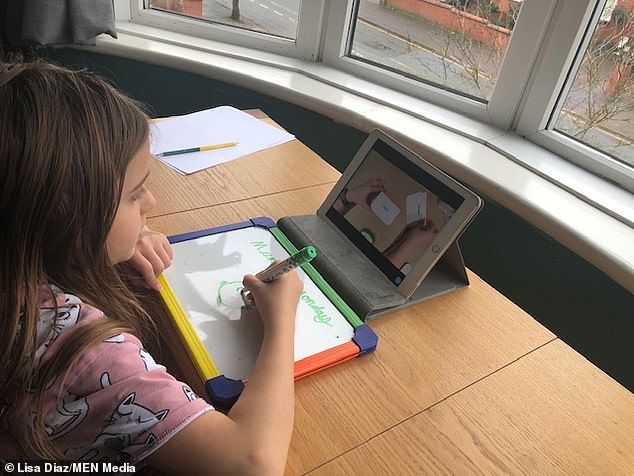 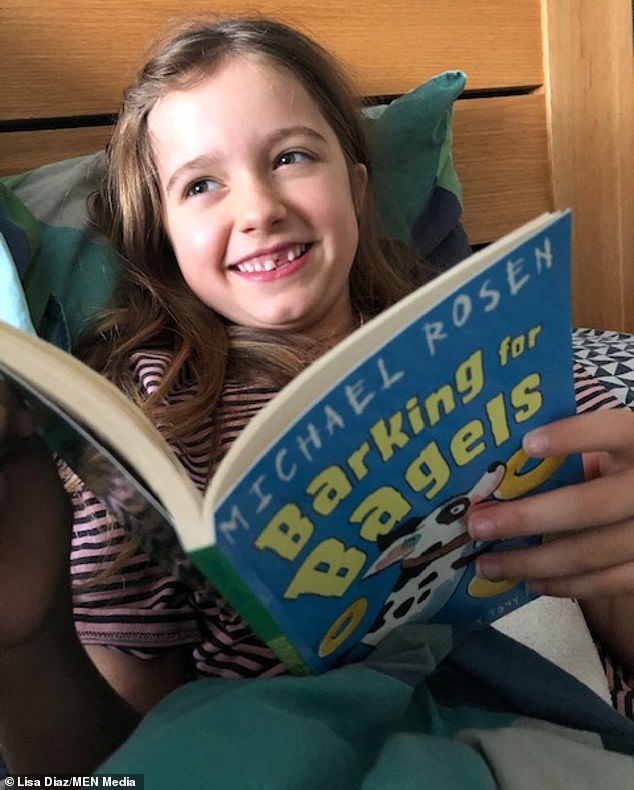 Ms Diaz said: ‘That I have been threatened with fines, prosecution and unlawful off-rolling for protecting my children during a global pandemic of a serious multi-system disease is beyond the pale’. Pictured, Helena studying at home

The mother-of-two added: ‘I want them to be in school. My kids want to be in school and it would be cruel to de-register them, but it has to be safe.

‘There is no other workplace or indoor environment in which 32 bodies are packed into a room without adequate and unmeasured ventilation; no social distancing and no masks.’

Miss Prior said: ‘Woodfield Primary School sympathises with parents’ concerns and we have worked tirelessly to ensure school is fully compliant with the necessary Covid-19 safety measures.

‘We do not want to see any of our families leave the school community and it is a priority for us to ensure our children can access their education in a school setting.’

Cath Pealing, Wigan Council’s assistant director for education said: ‘We are mindful that some families are concerned about the impacts of Covid-19 due to vulnerabilities and we will continue to work with them to ensure they feel as safe and supported as possible.

‘However, national guidance has now changed and schools are not under an obligation to continue to provide remote learning unless the child themselves is CEV or isolating.’

A Department for Education spokesperson said: ‘We expect schools and local authorities to work with families to discuss the reasons behind any child’s absence and together agree an action plan so that the right support can be put in place to help them return to full-time attendance.’