The two figures gaze across a barren and brown landscape with hills stretching out beneath the shifting tones of an ochre sky.

The expansive scene seems to roll on endlessly but the viewer, as did the artist, stands within the confines of the Geelong Gaol. 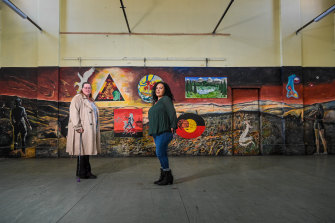 The 12-metre landscape could be among the biggest paintings by one of Australia’s most intriguing and tragic Indigenous artists, Revel Cooper, but for years it remained hidden from public view behind temporary walls.

The Geelong Gaol is now a museum and its managers say the mural’s story can finally be told after they confirmed it was painted by Cooper and opened it up to the public.

It is unclear why Cooper was jailed in Geelong. He painted prolifically and even sold work while serving time there during the late 1960s and early 1970s.

He spent much of his life in jail, having been convicted of manslaughter in Western Australia in 1951 and sentenced to four years.

But it was not until the 30th anniversary of the Geelong jail’s closure last year that former staff members told the museum managers that Cooper had painted the landscape.

Geelong Gaol Museum general manager Deb Robinson said the mural was covered by temporary walls after Rotary took over the site in 1995 and ran it as a community museum. For a while, the room was a dance studio.

“It was well hidden away, so nobody saw it,” she said. “Now is the time to share it and its story.” 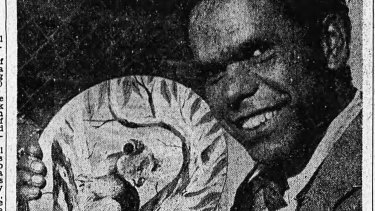 Revel Cooper pictured in The Age with one of his works.Credit:The Age

The museum, sold to a private buyer in 2019, is now conducting a significance report on the mural with a $60,000 grant from the City of Greater Geelong.

The report will also seek to establish who painted images on top of the Cooper mural, including a depiction of the eagle Bundjil with a white rabbit in his claws and the figure of a half-kangaroo half-crocodile painted in a Northern Territory style.

Some images painted onto the mural, including a Japanese maritime scene, are almost certainly not Cooper’s work.

The council’s Aboriginal and Torres Strait Islander senior policy officer, Julie Saylor Briggs, said the mural was different to many of Cooper’s other paintings, which are lush and green. 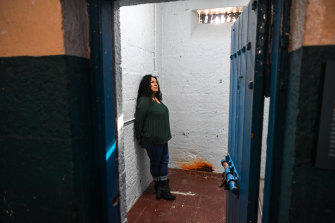 “This particular piece is barren,” she said. “It looks a bit post-apocalyptic to me.”

She said the work was probably Cooper’s largest painting. Saylor Briggs said while Cooper did not have children, she has been working to contact his family.

An entry in the Australian Dictionary of Biography by academic Sylvia Kleinert said Cooper was born at Katanning in Western Australia, probably in 1934. He was declared a ward of the state as a boy and placed in the Carrolup Native Settlement, which produced several talented artists.

“Cooper was of medium height with a slim build, a broad smile and an open, friendly disposition,” Kleinert wrote.

“His struggle with alcoholism and his itinerancy contributed to both the achievements and the tragedy of his life.” 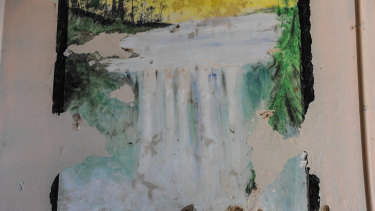 The remnants of a painting that was probably Revel Cooper’s work.Credit:Justin McManus

He was murdered age 49 in Buxton, north-east of Melbourne, in 1983 and lies in an unmarked grave in Fawkner cemetery.

Geelong Gaol Museum curator Rob Wynne said it was unknown how many other Cooper murals were hidden in the jail.

He said Cooper’s cell 18 was once covered in art. The tiny room, hardly bigger than a double bed, has since been painted a dull pale blue.

But a partially covered waterfall scene in the jail library is probably by Cooper. 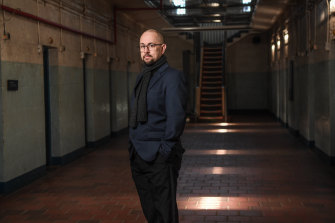 Onus, who is head of Melbourne University’s Wilin Centre for Indigenous Arts and Cultural Development, said Cooper’s landscapes expressed a strong sense of culture but also a yearning for country.

“A Revel Cooper draws you in from across the room. It embraces bold colours and bold lines,” he said. “It’s incredibly evocative.”

Onus said Cooper held a special place in his own family having worked in the Belgrave shop of his grandfather, Aboriginal activist Bill Onus, while also influencing the work produced by his artist father Lin.

While Cooper’s life was marked by sadness, Onus said his story was also one of incredible strength.

“I’m incredibly grateful for what we do have and excited about what’s out there still to be discovered.”