Tesla (TSLA) and SpaceX CEO Elon Musk avoided a question on Thursday that for weeks has weighed on the minds of Twitter’s (TWTR) employees and investors: Does he still intend to buy the social media company?

In a virtual all hands meeting with Twitter’s staff on Thursday, Musk reportedly laid out part of his vision for the company, according to Bloomberg, which cited a person familiar with the matter.

The meeting marks Musk’s first official communication with Twitter employees since he entered an agreement in late April to buy the company. Since then, however, Musk has expressed concerns over the $44 billion acquisition, raising doubts about whether he intends to go through with it.

Musk has cited the number of reported bots on the platform as his biggest problem with the move, though Twitter insists that automated accounts make up less than 5% of total the network’s monetizable daily active users (mDAU). Some observers have questioned whether the famously mercurial CEO is deploying the purported bots problem as a convenient excuse for wiggling out of the mega-deal as Twitter’s value plummets amid a tech selloff and broader bear market.

Musk’s touch-and-go plans to buy Twitter have made headlines for weeks. During Thursday’s meeting, the CEO characterized media reports, without specifying which ones, as containing lies about how the deal had been proceeding. 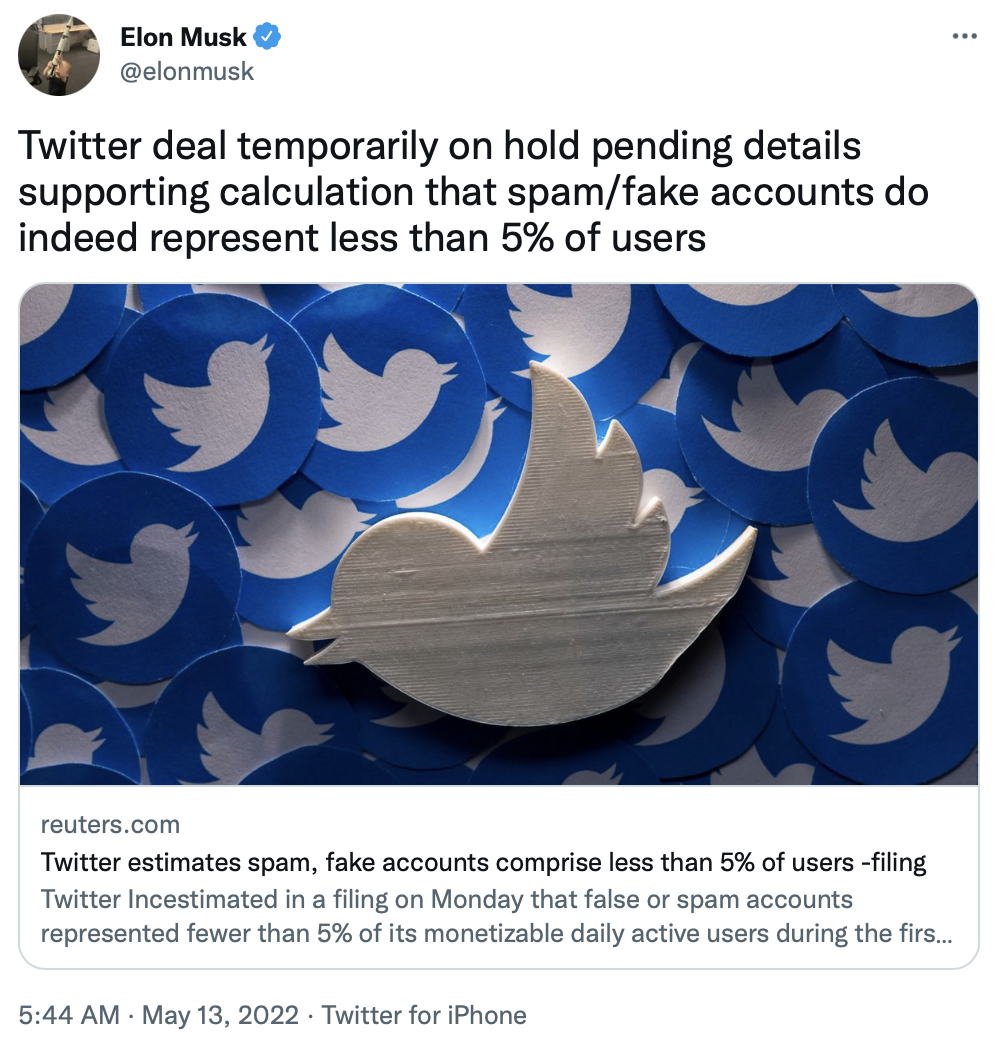 In tweets and correspondence with Twitter’s management, Musk has asserted his right to walk away from the deal, though legal experts question whether doing so would trigger Musk’s responsibility to pay Twitter a $1 billion break-up fee.

According to Musk, Twitter has refused to share with him raw data on the social media platform’s number of spam and fake accounts, which he says is necessary to evaluate whether to move forward with the deal.

“Twitter’s latest offer to simply provide additional details regarding the company’s own testing methodologies, whether through written materials or verbal explanations, is tantamount to refusing Mr. Musk’s data requests,” a lawyer for Musk wrote in a letter to Twitter on June 6.

Outside of bots and his gripes with the media, Musk on Thursday reiterated his belief that free speech is paramount for Twitter. Musk has previously vowed to reverse Twitter’s permanent ban on former President Trump, who was kicked off of the platform following the Jan. 6 attack on the Capitol.

Also on Thursday, Musk set a goal of growing Twitter from its current 229 million mDAUs to 1 billion; he’s also considered charging users a fee to verify accounts. As for bots, Musk reportedly pushed for using open source code to moderate or control spam and automated accounts.

Musk regularly communicates with the public via Twitter, frequently taking to the social network to relay information about his various companies. But he also spends time on the service sharing memes, disparaging politicians, and mocking his critics.

Twitter shares were trading around $38 immediately after the meeting on Thursday. On April 22, the last day of trading before the deal was announced, Twitter’s shares closed at $48.93. If the deal goes through, Musk would pay $54.20 per share for the company.

Shares of Tesla, which make up a larger portion of Musk’s wealth, were trading down more than 9%, at $630 a share, on Thursday afternoon.

Clarification:This piece has been updated to indicate Twitter believes less than 5% of its monetizable daily active users are bots.

For tutorials and information on investing and trading stocks, check out Cashay