Mr Zahawi said Mr Johnson had not broken any coronavirus rules by taking part in the event.

The Sunday Mirror published an image of the PM showing him on a screen, sitting in front of a laptop in the Number 10 library alongside two colleagues, one of whom is draped in tinsel.

Downing Street has insisted the quiz was ‘virtual’ but reports claimed many staff were huddled by computers in Number 10 as they conferred on questions and drank alcohol.

The quiz took place on December 15 last year, three days before an alleged rule-breaking Christmas party in Number 10, which is currently being investigated by Cabinet Secretary Simon Case.

The emergence of the photograph of Mr Johnson taking part in the event will pile even more pressure on the premier after a torrid week in which he has been battered over an array of scandals.

Mr Zahawi told Sky News that the image showed Mr Johnson was ‘respecting the lockdown rules’ and ‘many people would have had similar Zoom quiz nights around the country’.

The Cabinet minister said he believes ‘people will look at that picture today… and will think hold on a second, he is on a virtual call, no alcohol, thanking his staff for 10 minutes before he goes back to work, is that really a terrible crime?’

Labour has accused Mr Johnson of presiding over a ‘culture of disregard for the rules’. 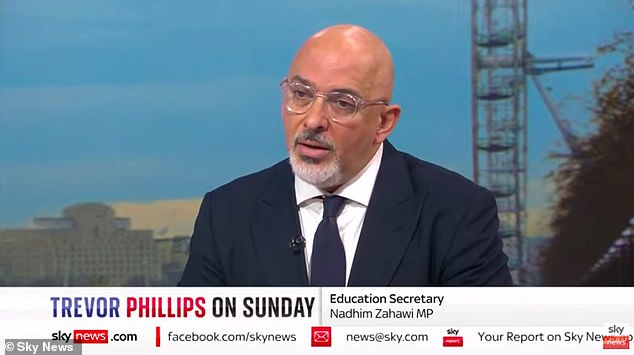 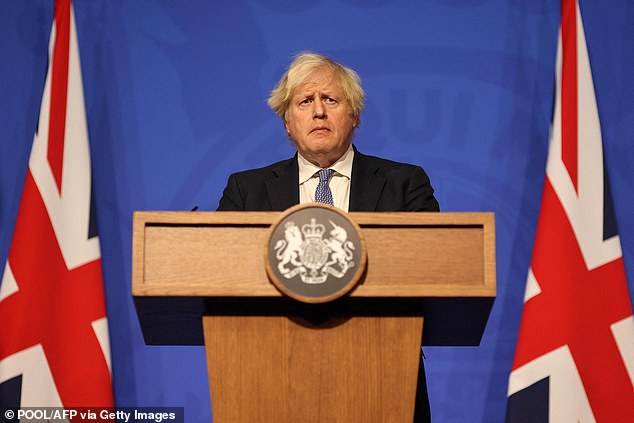 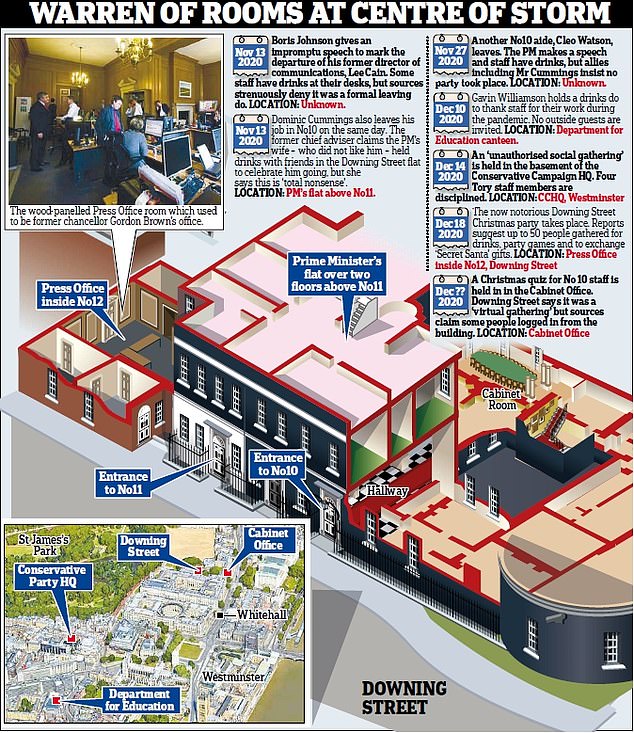 Dom’s Gone bash – November 13: Dominic Cummings alleges that the PM held a gathering at his grace-and-favour flat on November 13 last year, the day the adviser was ousted from Downing Street. Mr Cummings also suggested there had been ‘other flat parties’.

Leaving do – November 27: The Prime Minister reportedly gave a speech at a packed Number 10 leaving do for a ‘senior aide’. Sources claimed that ’40 or 50 people’ were present.

Christmas party – December 18: Staff in Downing Street are believed to have held a Christmas party, with reports that dozens of people attended the event, some wearing festive jumpers and exchanging Secret Santa presents. London had been placed into Tier 3 restrictions on December 16 – the highest level of curbs on freedoms at the time which banned people from different households mixing indoors. Downing Street has said Boris Johnson did not attend the event.

Quiz night – December: Sources told the BBC that a separate Christmas quiz event was held for Number 10 staff at some point in December. Everyone was apparently invited to attend and to form teams. One source said some people attended virtually via Zoom but others did attend in person and sat in groups of six. Downing Street has insisted the quiz was ‘virtual’.

… AND ELSEWHERE IN WHITEHALL

December 10: Then-education secretary Gavin Williamson hosted a Department for Education party for ‘up to 24 people’ on December 10. The gathering, which included food and drink, took place in the department’s canteen. The department has admitted the event happened.

December 14: About 25 people gathered in the basement of the Conservative party’s Matthew Parker St offices in Westminster. The Times reported last night that advisers at Conservative campaign headquarters held an event with Shaun Bailey, the party’s unsuccessful candidate for mayor of London this May.

Mr Zahawi was asked this morning why people should follow coronavirus rules amid allegations of rule-breaking in Number 10.

The Education Secretary said: ‘The first to say on that is that actually the nation has been brilliant following the guidelines.’

Told that that was before the row over Christmas parties, Mr Zahawi said: ‘All the time. Even yesterday people were queueing up at vaccination sites, walk-in sites or booking their booster jabs. That is a great thing and I am grateful to people doing that and we thank them for that.

‘I have to say to you, you just mentioned the quiz night and that picture today.

‘What do we see in that picture? We see a prime minister on a virtual quiz night for 10 to 15 minutes to thank his staff who by the way had no choice but to come in every single day.

‘Sitting in his office with the two people who are closest working with him, no alcohol on the table, not drinking, on a Zoom call or a Teams call, on a virtual call, respecting the lockdown rules.

‘Many people would have had similar Zoom quiz nights around the country.’

When it was pointed out that Mr Johnson was sat next to two people during the quiz, Mr Zahawi said: ‘They are in his office. They work with him.

‘All I am saying to you is the Cabinet Secretary is going to investigate everything.

‘But that picture… I have had emails from constituents because the hype around parties that was going on in the last week and the week before made it sound sort of completely different and actually I think people will look at that picture today… and will think hold on a second, he is on a virtual call, no alcohol, thanking his staff for 10 minutes before he goes back to work, is that really a terrible crime?’

Asked if he believes the PM is now a ‘liability’, Mr Zahawi said: ‘I don’t agree with that.

I work very closely with Boris Johnson. I worked with him when I was business and industry minister, with the vaccines taskforce and when he asked me to do the vaccine deployment programme.

‘He works literally all hours to make sure we get through this pandemic.’

Official guidance in place last December stated: ‘Although there are exemptions for work purposes, you must not have a work Christmas lunch or party, where that is a primarily social activity and is not otherwise permitted by the rules in your tier.’

At the time of the quiz, London was in Tier 2 which dictated there should be no mixing of households indoors, apart from support bubbles, and a maximum of six people outside.

The Sunday Mirror quoted a source who claimed many staff were huddled by computers, conferring on questions and drinking alcohol while the quiz was taking place.

It reported Mr Johnson surprised staff by turning up on screen as quiz master for one round lasting between 10 and 15 minutes.

Labour said the latest revelation showed Mr Johnson ‘really believes it’s one rule for him, another for everyone else’.

Labour deputy leader Angela Rayner said: ‘While the rules said that people shouldn’t have Christmas parties at work and Britons across the country were doing the right thing, Boris Johnson was instead happy to preside over a culture of disregard for the rules at the heart of Government.

‘Despite repeated denials of parties in Number 10, it now transpires that there were numerous parties, gatherings and the Prime Minister even took part in a festive quiz.

‘Boris Johnson really believes it’s one rule for him, another for everyone else. He is a man unfit to lead this country.’

A Number 10 spokeswoman said: ‘This was a virtual quiz.

‘Downing Street staff were often required to be in the office to work on the pandemic response so those who were in the office for work may have attended virtually from their desks.

‘The Prime Minister briefly took part virtually in a quiz to thank staff for their hard work throughout the year.’

A second reported Downing Street event – an aide’s leaving do which is said to have taken place on November 27 – was allegedly attended by the Prime Minister, who The Mirror said made a speech.

Mr Case is investigating both alleged events, along with a festive celebration arranged at the Department for Education, which officials have admitted did take place and have expressed regret over.

The Department for Work and Pensions (DWP) has since confirmed that staff working for Therese Coffey drank alcohol and ate takeaways ‘late into the evening’ on a number of occasions while coronavirus restrictions were in place.

It comes after the Sunday Mirror reported that political staff and officials frequently drank after work until the early hours of the morning, and ordered food to the Work and Pension Secretary’s office at the department’s Whitehall headquarters.

The DWP has confirmed there were times when alcohol was consumed in a work space outside the Cabinet minister’s Whitehall office but stressed it took place while work was continuing past normal employment hours.

A source said the desks in the office are socially distanced and there was ‘no party atmosphere going on’.