The team operating NASA’s Perseverance rover has started cataloging geological formations on the surface of Mars with names from the Navajo language.

The names are a nod to the project’s large contingent from universities and national labs in New Mexico and Arizona, states that include traditional Navajo land, Forbes reported.

The rover’s first scientific focus is a rock named ‘Máaz’ – the Navajo word for ‘Mars.’ 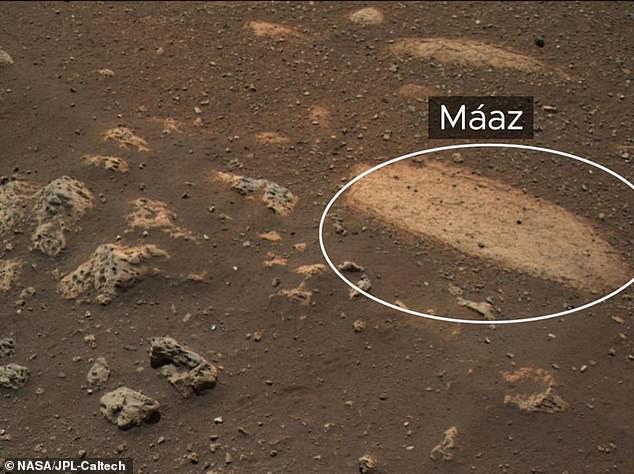 An image of the the rover’s first scientific focus, a rock named ‘Máaz’ – the Navajo word for ‘Mars’ 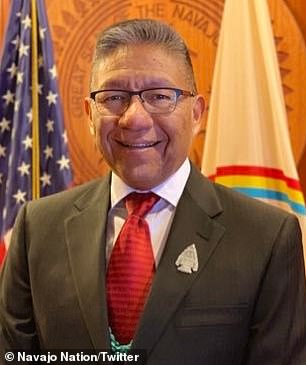 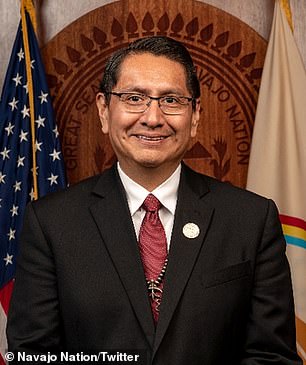 Surface missions assign nicknames to landmarks to provide the mission’s team members, which number in the thousands, a common way to refer to rocks, soils and other geologic features.

Before launch, Perseverance’s team identified a grid of quadrangles of about 1.5 square kilometers (1 square mile) each. The team named the quads after national parks and preserves on Earth with similar geology, with Perseverance touching down in the quad named for Arizona’s Canyon de Chelly National Monument.

Aaron Yazzie of NASA’s Jet Propulsion Laboratory in Southern California, a team engineer who is Navajo, sough the Navajo Nation’s permission and collaboration with the naming aspect of the work.

Some terms were inspired by the terrain Perseverance captured in images at its landing site, such as ‘tséwózí bee hazhmeezh,’ or ‘rolling rows of pebbles, like waves.’ Yazzie added suggestions including ‘bidziil,’ or ‘strength,’ and ‘hoł nilį́,’ or ‘respect.’ Perseverance was translated to ‘Ha’ahóni.’

Navajo Nation President Jonathan Nez and Vice President Myron Lizer provided a list of words in the Navajo language that could be used by the Perseverance team.

The list includes 50 names and is expected to grow as the rover team works with Navajo Nation officials and Perseverance continues to explore.

‘The partnership that the Nez-Lizer Administration has built with NASA will help to revitalize our Navajo language,’ Nez said.

‘We hope that having our language used in the Perseverance mission will inspire more of our young Navajo people to understand the importance and the significance of learning our language,’ Nez added. ‘Our words were used to help win World War II, and now we are helping to navigate and learn more about the planet Mars.’

Perseverance has to be ‘taught’ the language to recognize landmarks labeled in Navajo. The accent marks used in the English alphabet to convey the intonation of the language cannot be read by the rover’s computer.

While the team attempted to find translations that best resembled Navajo spellings, Yazzie said they plan to use English letters without special characters or punctuation to represent Navajo words.

‘This partnership is encouraging the rover’s science team to be more thoughtful about the names being considered for features on Mars – what they mean both geologically and to people on Earth,’ Stack Morgan said.

A key objective for Perseverance’s mission is astrobiology, including the search for signs of ancient microbial life. The rover will characterize Mars geology and past climate, becoming the first mission to collect and cache Martian rock and soil and paving the way for human exploration. 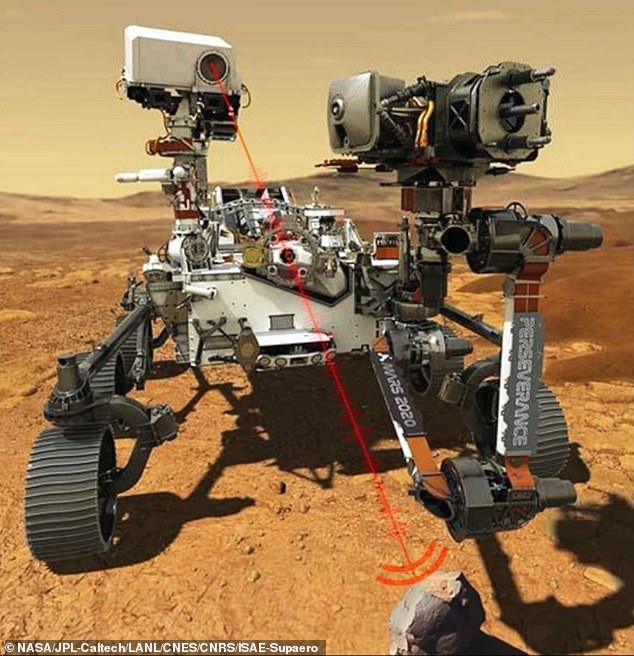 The rover is strapped with a slew of high-tech instruments to help it uncover the crater’s secrets.

A SuperCam fires laser beams that heat targets to 9,982 degrees Celsius (18,000 Fahrenheit), which is hot enough to transform the solid rock into plasma that can be imaged by a camera for further analysis.

The technology, located on the mast, releases pulses capable of vaporizing rocks from up to 6 meters (20 feet) away and is a key component for investigating signs of ancient life in the Jezero Crater, a former lake that flowed with water 3.5 billion years ago.

Attached to the mast is a 12-pound sensor designed to perform five types of analyses to help scientists determine which rocks the rover should sample.

The latest audio recording shared by NASA was from Perseverance’s first laser shot. The sounds of 30 impacts can be heard during the recording captured by an attached microphone.

The clip shared by NASA, which is about 10 seconds, includes the first sounds recorded from the Martian world.

The laser enabled the ground team to analyze the target’s composition, which proved to be mostly volcanic rocks.

NASA says ‘variations in the intensity of the zapping sounds will provide information on the physical structure of the targets, such as its relative hardness or the presence of weathering coatings.’ 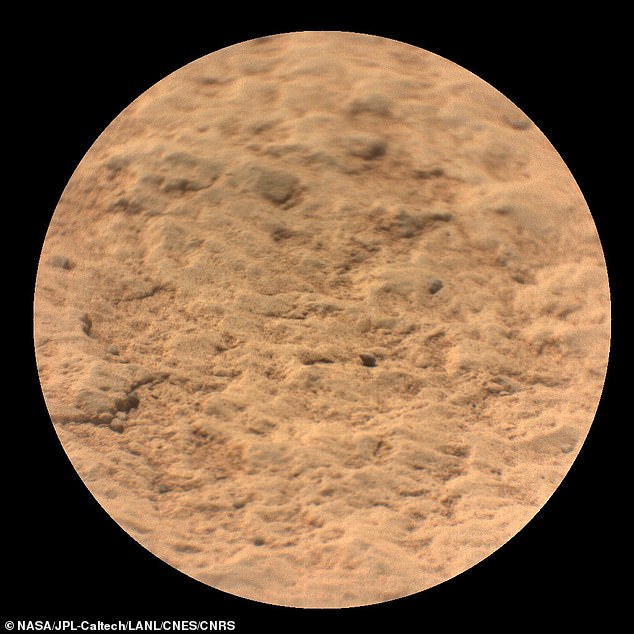 Perseverance chose the target Máaz, which is Navajo for ‘Mars,’ which sat 10 feet away from its location. NASA intercepted the pulses for a further analysis that determine the rocks were mostly volcanic 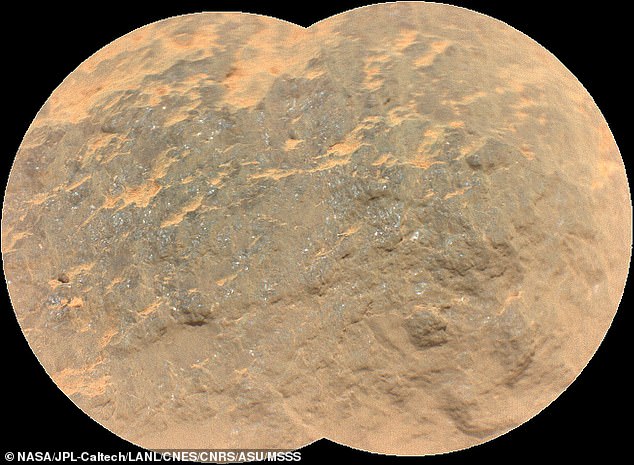 Combining two images, this mosaic shows a close-up view of the rock target named ‘Yeehgo’ from the SuperCam instrument on NASA’s Perseverance rover on Mars. The component images were taken by SuperCam’s Remote Micro-Imager (RMI). To be compatible with the rover’s software, ‘Yeehgo’ is an alternative spelling of ‘Yéigo,’ the Navajo word for diligent 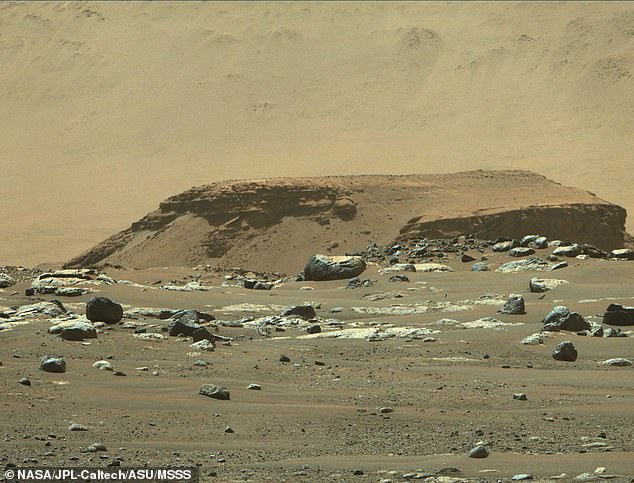 Picture is an image of delta near Jezero Crater that is a raised area of dark brown rock in the middle of the ground.  Perseverance now making its way to the crater that was a former lake flowing with water 3.5 billion years ago

‘These recordings have demonstrated that our microphone is not only functioning well, but we also have a very high-quality signal for our scientific studies,’ SuperCam team member Naomi Murdoch, a researcher at the Institut Supérieur de l’Aéronautique et de l’Espace in Toulouse, France, said Wednesday.

It is not yet clear if the area was once volcanic, said SuperCam principal investigator Roger Wiens of Los Alamos National Laboratory, a U.S. Department of Energy facility in New Mexico.

Máaz could be ‘a sedimentary rock composed of igneous grains that were washed downriver into Jezero Lake and cemented together,’ Wiens said.

Perseverance is one of two NASA rovers currently operating on the Red Planet. Curiosity has been trundling along Gale crater since August 2012. 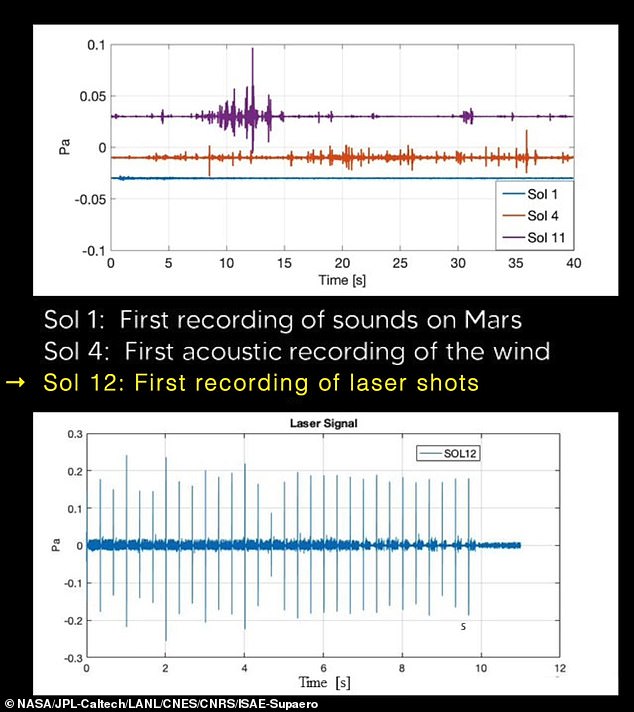 The sounds of 30 impacts can be heard during the audio recording, which were shot from the rover’s SuperCam instrument and captured by a microphone attached to the rover