The James Webb Space Telescope’s first images of Neptune, the mysterious ice giant that orbits in the far reaches of the outer solar system, were so spectacular that even astronomers could barely contain their emotions.

The observatory’s views, released Wednesday, include rare looks at Neptune’s rings, providing some of the sharpest images of these ghostly features seen in more than 30 years, according to NASA.

“Not gonna lie. I ugly-cried when I saw THE FIRST JWST NEPTUNE IMAGES!” Heidi Hammel, an interdisciplinary scientist with the Webb telescope and a planetary scientist whose research has focused on Neptune and Uranus, tweeted Wednesday.

The images are the first that have been taken of Neptune’s rings at infrared wavelengths, which can pierce through dust and gas that might otherwise obscure celestial targets. The Webb telescope’s infrared instruments allow it to see planets, stars and galaxies beyond the range of human sight and other telescopes that see primarily in visible light.

“Wow, I am in awe of those rings!” tweeted Thomas Zurbuchen, associate administrator of NASA’s Science Mission Directorate.

Along with its bright rings, the Webb observatory spied Neptune’s fainter dust bands and seven of the planet’s 14 known moons.

The last time Neptune’s rings were seen in detail was during a flyby in 1989 by NASA’s Voyager 2 spacecraft as it journeyed beyond the solar system and into interstellar space. That historic flyby gave humanity its first up-close view of the solar system’s eighth planet.

Now, scientists are getting an even clearer view of Neptune.

“It has been three decades since we last saw these faint, dusty rings, and this is the first time we’ve seen them in the infrared,” Hammel said in a statement.

Around Neptune’s equator, a thin bright line may indicate where the atmosphere is warming, and thus glowing at infrared wavelengths, compared to the surrounding gas, which is cooler, according to NASA. These features may be visual signatures of the planet’s atmospheric circulation and could be what drives Neptune’s winds and storms, the agency added.

The Webb observatory captured a previously known vortex at Neptune’s southern pole and spotted a continuous band of clouds surrounding it, NASA officials said. There is also a bright area near the planet’s northern pole that will require follow-up observations. 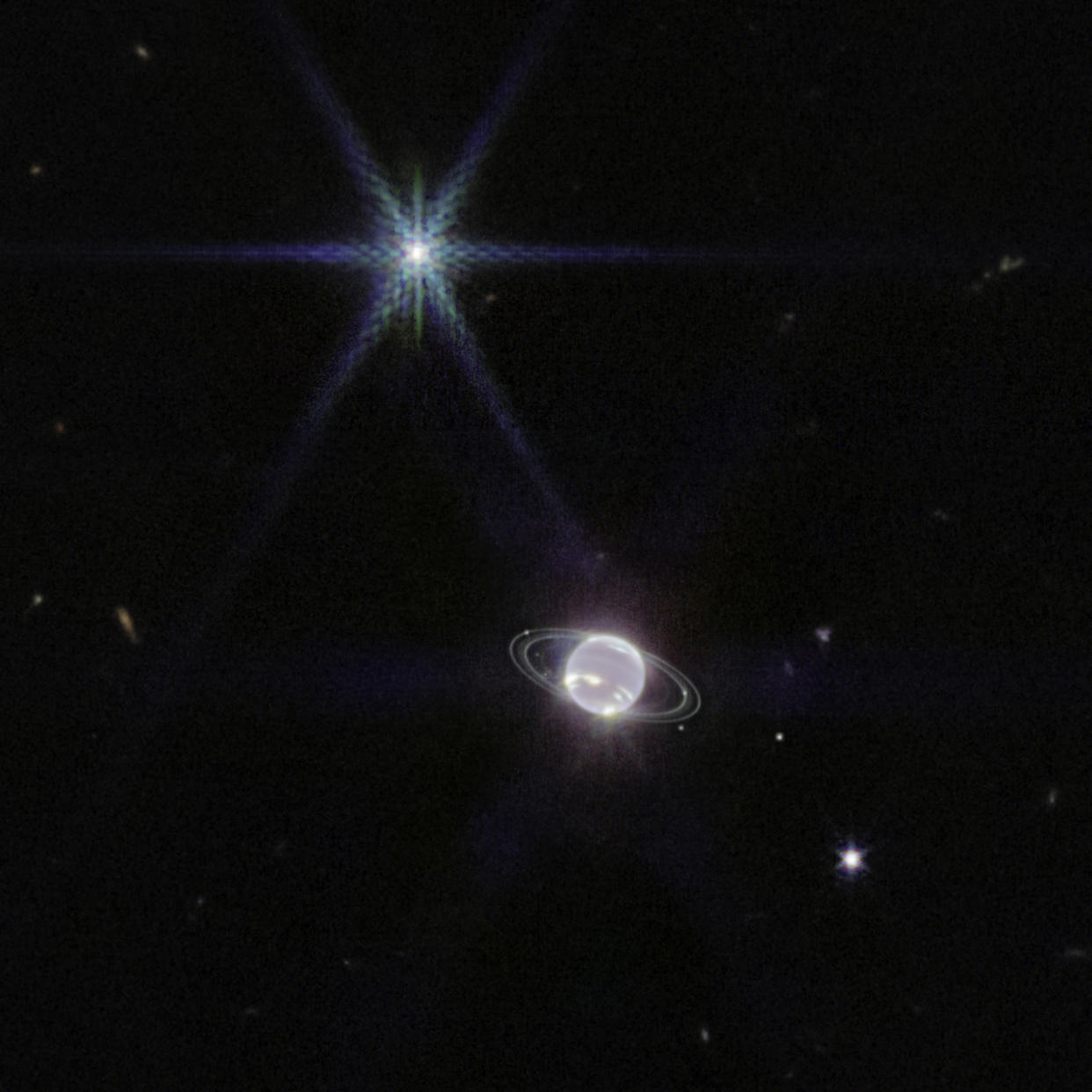 In one image, a bright blue feature that looks like a star is actually the moon Triton, which outshines Neptune because it is cloaked in a frozen layer of condensed nitrogen and reflects more sunlight than the planet and its atmosphere.

Neptune was discovered in 1846 and is located 30 times farther from the sun than Earth. The planet’s 164-year orbit takes it through some of the darkest and most remote regions of the outer solar system.

Neptune is considered an “ice giant” because of its internal chemical composition. Unlike Jupiter and Saturn, the gas giants of the outer solar system, Neptune is richer in elements heavier than hydrogen and helium, according to NASA.

The James Webb Space Telescope is a collaboration between NASA, the European Space Agency and the Canadian Space Agency. The tennis court-sized observatory is designed to study the early days after the Big Bang and help astronomers piece together how the modern universe came to be.