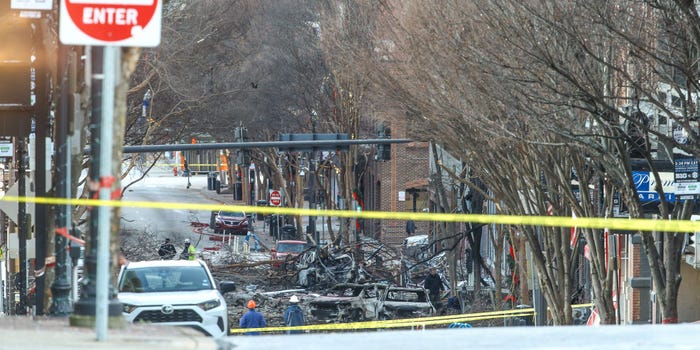 As the investigation continues into the motives of the suspected suicide bomber Anthony Quinn Warner, Nashville Metropolitan Police released bodycam footage Monday, which gave viewers a grim, ground-level view of the downtown Nashville explosion as it played out.

The bodycam footage belonged to Officer Michael Sipos, and it begins with Sipos patrolling Second Avenue North in downtown Nashville with a colleague.

Within the first minute, the officers walk towards an RV, which is playing "Downtown" by British rock singer Petula Clark over a loudspeaker.

The RV broadcasts intermittent warnings, saying, "If you hear this message, evacuate now. Stay clear of this vehicle."

Sipos and his colleague can be heard almost in disbelief of the ominous scene.

Sipos and his colleague heed the warning as a few scattered pedestrians around the largely empty Second Avenue North scatter.

After rounding a corner and heading back to his vehicle, and about 4 minutes into the footage, a loud explosion is heard, followed by a chorus of car alarms, shattered glass, and fire alarms. Sipos and other officers immediately put on ballistic vests and head back towards the scene.

As Sipos heads back through downtown Nashville, the street is smoky and filled with debris, and as Sipos pans out to the RV, a fire engulfs it, with smaller fires scattered around.

A handful of panicked pedestrians pass by the officers, who ask them to evacuate the area.

On Friday, Nashville Police praised Sipos and six other officers initially present near the blast as they had reportedly knocked on doors to evacuate residents before the explosion. The department claimed that the blast was so strong that officers were knocked off their feet.

At a press conference Sunday, Officer Amanda Topping, who was also present said that "It kind of looked like a big prop from a movie scene, all the glass breaking at once," adding that she would never forget it.

As of Tuesday, eight people were injured by the blast according to authorities, while authorities have not found any casualties other than remains suspected to be Warner.