An NHS boss told a black nurse to ‘bleach your skin so that you come back tomorrow white and the patient will be nice to you’ after she reported having been racially abused, a tribunal heard.

Nurse Adelaide Kweyama, from South Africa, was shocked by the comment after she reported that a patient had racially abused her and pretended he could not speak English.

She later overheard the senior nurse telling a colleague she was ‘tired of people coming to work and said they are not well,’ and that Ms Kweyama should ‘go and bleach her skin,’ the panel was told.

Ms Kweyama, who was working as an agency nurse at an immigrant removal centre in Heathrow, was also racially abused by a group of male detainees who called her ‘n*****, monkey’ in a previous incident.

An employment judge criticised NHS bosses’ response to the incident, describing it as an ‘absolute abdication of the positive responsibility on managers’. 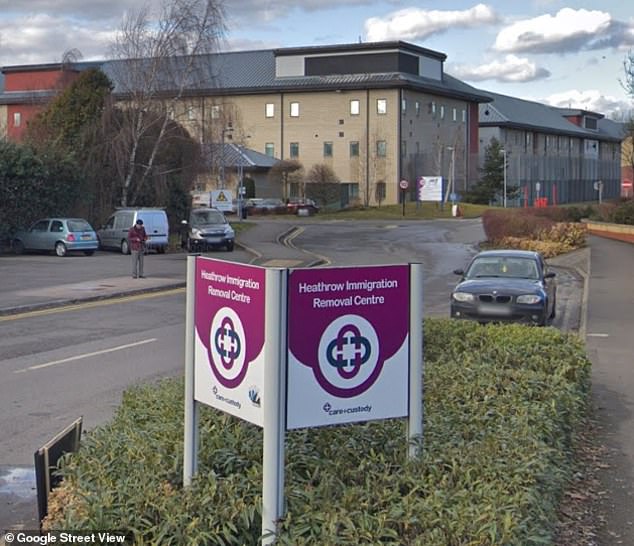 The centre houses around 600 male immigration detainees from a wide range of countries pending their removal from the UK.

The detainees receive medical treatment from the Trust staff prior to being deported, the panel was told.

In January 2019, there was an incident in which Ms Kweyama was racially abused by a group of detainees who were waiting for their medication to be administered.

The nurse told them to come one by one for their medication and to close the door and was then racially abused.

Ms Kweyama told the tribunal: ‘[The detainees] started calling me n****r, monkey, and started making monkey noises and dog noises, demanding to come in at the same time.’

The nurse subsequently raised an electronic incident report about the incident, the tribunal heard.

‘Overworked’ NHS managers failed to keep her updated on the progress of her complaint and did not tell her what steps had been taken to minimise the chance of such an event happening again, the panel heard.

An employment judge considered the Trust’s response to the incident to be an ‘absolute abdication of the positive responsibility on managers’.

In another incident the following month, Ms Kweyama was attending to a detainee who was racially abusive to her and pretended he could not speak or understand English.

When Ms Kweyama raised the issue with her senior nurse she said she was told: ‘You need to get a pool of bleach to bleach your skin so that you come back tomorrow white and the patient will be nice to you.’

Later on that day, the same nurse was overheard talking to another colleague and saying: ‘I do not care, let her go and bleach her skin, I am sick and tired of people coming to work and said they are not well.’

A few weeks after the incident, Ms Kweyama emailed her agency, Athona, and told them she was unable to work at the Heathrow centre any more because she had ‘become very depressed… and needed time to recover psychologically and emotionally’.

Ms Kweyama also complained that she had ‘suffered racial abuse,’ the NHS Trust had ‘done nothing to support her,’ and that she had suffered a ‘withdrawal of employment as a result,’ the panel heard.

In the same month, she was told by an NHS manager that her contract was being terminated because the boss was ‘concerned about the claimant’s mental health’ because ‘some words used in her statement were worrying.’

The tribunal concluded that the nurse had indeed been the victim of race-related harassment and victimisation when she was told to ‘bleach her skin.’

Ms Kweyama was also victimised by her boss for the same comments and when she was told her agency role was being terminated, the tribunal ruled.

Her compliant of direct race discrimination however, was dismissed.

A remedy hearing will be held at a later date.