Nicole Kidman ‘being used’ by Beijing in Hong Kong shoot

For more than three decades in public life, Nicole Kidman has deftly avoided political controversy, but she has now found herself a starring role in a city that within two years has transformed from a liberal enclave to a hub of political oppression.

The 54-year-old received a rare quarantine exemption from the Hong Kong government to fly into the city last week to begin filming Expats, an Amazon series that her production company Blossom Films owns the rights to. The series is based on Janice Y. K. Lee’s book, The Expatriates – described by critics as “Sex and the City meets Lost in Translation”. 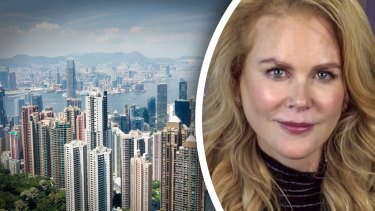 The social satire follows three foreign women going through their own crises and fretting about how to fill their days, debating whether to wear Dansko clogs or Jimmy Choo mules and whether to talk “about nannies or Rwanda?” as locals perform the roles of “feudal servants, running to obey every whim”.

The book, released in 2016, is a product of old Hong Kong, where expats made for good book club fodder, sunning themselves, drinking cosmos and talking market caps. But it is a world away from today’s Hong Kong where protesters have been arrested for holding up blank pieces of paper, six-year-olds at school are drilled on national security breaches and its residents buy one-way tickets to London.

Beijing implemented national security laws last year to put an end to 18-months of protests over its rising influence in the former British colony. Then it sent the executives of a defiant newspaper, Apple Daily, to jail, set up a top-secret national security bureau in the Metropark Hotel and disqualified most of the political opposition.

Does Kidman pay attention to these developments? It is hard to say. Her team did not respond to requests for comment.

The 54-year-old has spent her career making the noises you would expect of a left-leaning Hollywood star, pro-gay marriage, women’s rights and donations to US Democrats.

“I’m always reticent to start commenting politically; I’ve never done it in terms of America or Australia. I’m issue-based,” she said in 2017.

But Chinese artists fear the show, promoted and supported by the Hong Kong government as “conducive to maintaining the necessary operation and development of Hong Kong’s economy” will give a soft-power win to Beijing.

“I think this whole project will be run by the Hong Kong government as a soft propaganda program that will sugarcoat the lies in Hong Kong,” said artist Badiucao. 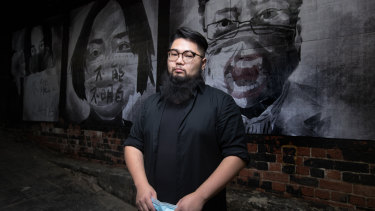 Badiucao wrestles with the responsibilities of a filmmaker to reflect their current environment, particularly when the book their show is based on was published three years before the Hong Kong pro-democracy pushed millions on the streets but well after the umbrella movement that started it all.

“Even though it was released in 2016, there’s still no excuse to avoiding all the political turmoil that has been going on in Hong Kong,” he said. “You don’t have to insert protests, but we must know that this movement is across the entire city shocked everyone’s daily life.”

An expat teacher who asked not to be identified because education is politically sensitive in Hong Kong said Kidman was “being used”.

“I really don’t like that her being here lends legitimacy to the notion that Hong Kong is still a world city and free in some way,” he said. “It’s not, and she helps the Chinese Communist Party look legitimate in that respect.”

Badiucao said the show had a choice that it should reflect on. “This potentially can be a great artwork because it is caught in-between a lot of the struggles in this rapidly changing city now. If it wants to, it can show the impact of how Hong Kong has changed.”

Director Lulu Wang, Beijing-born but US raised, has focussed her films on the dinner table, the light and dark of family life. She said last year she intentionally avoids being overtly political in her work but does think that “there’s a lot of downsides to collectivism”. 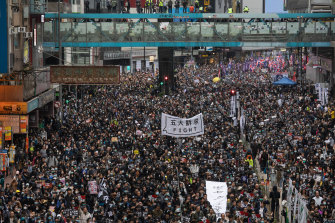 Protesters took to the streets of Causeway Bay in Hong Kong on January 1 2020. Credit:Bloomberg

When she was head-hunted by Kidman to direct the show, she said in May last year that her main concern was the safety of the shoot. “In Hong Kong, it was always about safety, with the protests and everything, but now in a way, the hope is that Hong Kong will recover faster,” she told Indie film magazine The Shelf.

The show has already received a substantial investment of political capital from the local government. Kidman came in quarantine-free after landing on a private jet on August 12 to reportedly stay at a $116,000-a-month apartment at The Peak.

Mark Tucker, the chairman of Hong Kong’s largest bank, HSBC, had to do the full 21 days of hotel isolation in the world’s strictest quarantine regime when he landed at the end of July. So did Hong Kong’s Olympic medallists. But the Hong Kong government had to defend its special treatment of Kidman when she was spotted shopping at COS in Queen’s Road Central on Sunday, less than a week after getting into town from Sydney where COVID cases were reaching 460 per day.

Hong Kong, a city of 8 million, has recorded an average of 3 cases a day for the past week.

“The case in discussion has been granted permission to travel to Hong Kong with a quarantine exemption for the purpose of performing designated professional work,” Hong Kong’s Commerce and Economic Development Bureau said in a statement.

“[The work] is conducive to maintaining the necessary operation and development of Hong Kong’s economy.”